The Wonderful World of Absolutely, Definitely Not Disney: “Something Intangible,” at the Playcrafters Barn Theatre through July 21 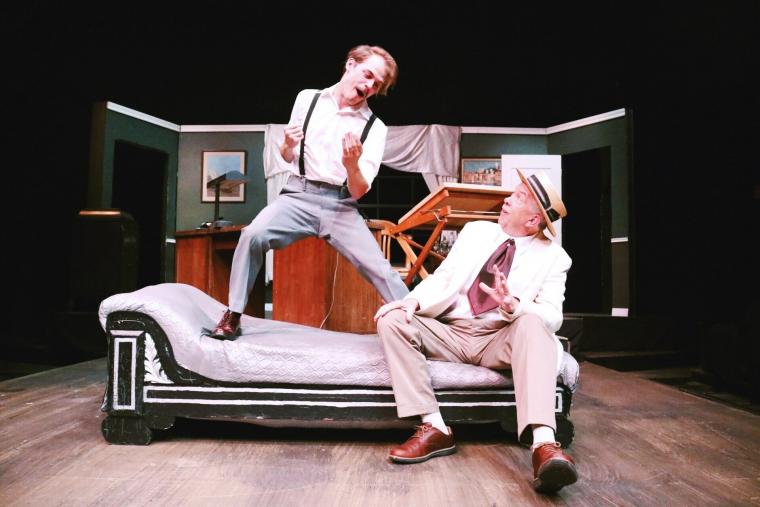 Anthony Natarelli and Bruce R. Duling in Something Intangible

I won't be coy: The Playcrafters Barn Theatre's Something Intangible, by Bruce Graham, is an imagining of the relationship between brothers Walt and Roy Disney, but with the names changed. They co-founded the Disney Bros. Studios, with Walt the visionary and Roy the money man.

Why not keep the names? Well, you can write about a public figure. However, if you write, unauthorized, about someone who launched a mega-empire money machine that employs a ravenous pack of lawyers, you'll pay. (Look up "litigation" and you'll see a picture of Mick- … . Uh, Petey Pup.) Disney even sued a daycare center for appropriating its characters … which is the company's right, actually, and necessary to protect its brand. I just wish every artist could afford to defend their creations against plagiarists. Many people routinely gank others' stuff for their own purposes – even more often now in our digital age, because it's so easy.

But I digress. Something Intangible premiered in 2009. I don't know how much of it is fiction, but it also doesn't matter – this isn't an official biography. Its premise concerning an animation studio and the siblings who started it is just a background for the story. (In fact, playwright Grahams' original concept involved the brothers Van Gogh.) The play focuses on Dale (Adam Cerny) as he tells his psychotherapist Dr. Feldman (Kayla McKay) about his life, much of which involves placating and supporting his mercurial brother Tony (Anthony Natarelli). 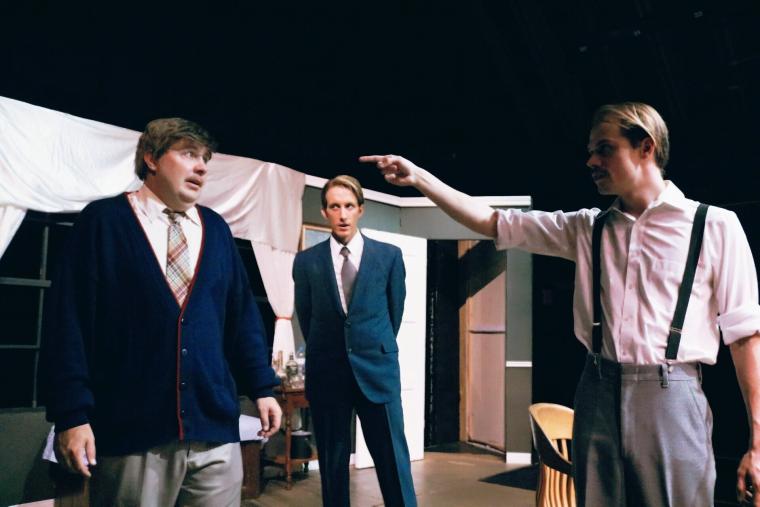 As Dale, Cerny is reserved (usually) and circumspect, but never dull. As always, he brings his character to vibrant life, starting at the bone and working to the surface. His posture, mannerisms, natural speech, and expressions are utterly real. Cerny would be a perfect spy or con artist, able as he is to vanish into any persona. (But please don't do that, Adam.)

Natarelli, as the creative Tony, is wildly entertaining. He contributes seemingly infinite energy to every production. Tony, like his signature creation Petey Pup, is a cartoon. He bounds into rooms, leaps onto furniture, waves his arms, and yells. He seems uncontrolled, but he's not. Natarelli is in there, driving the plot, inking every cel. Like his character, he knows how to communicate and appeal to viewers.

McKay's Dr. Feldman is an ever-present audience for Dale's stories (as we are), and her few lines reveal that she's another naturalistic actor. Feldman is friend and counselor to Dale, yet is as tough as was required for a 1940s working woman to be. Beneath her calm, I could feel the steel.

Eric Teeter, who also serves as Something Intangible's sound designer, is Leo, a diligent animator who tries to please his boss while withstanding his abuse. Teeter projects the loyal hangdog aura to a T. However, Leo is not a fall guy or comic relief, and Teeter makes Leo an earnest artist full of ideas. Many can relate to Leo, an employee who strives to make others look good, but instead of getting credit or a bonus, gets kicked in the teeth. I really wanted Leo to catch a break. I like to imagine that he did. 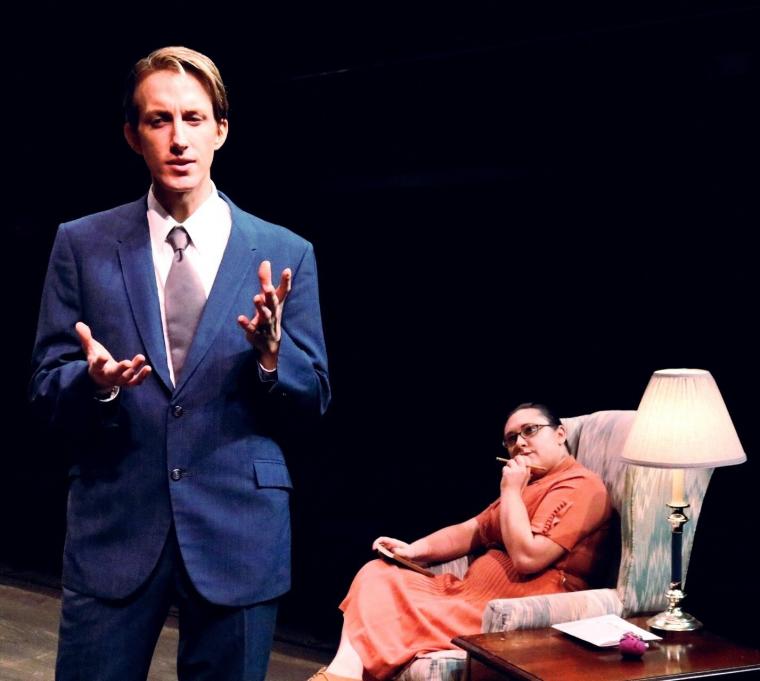 Bruce R. Duling plays both Doc Bartelli, a studio financier, and composer Gustav Von Meyerhoff, with whom Tony is collaborating on a major film project. Veteran actor Duling nails both roles, with his respective East Coast and German accents recognizable, but not impenetrable.

I saw the opening-night performance, which played as smoothly as if it had been running for weeks. This show must be a bear to stage, as most of it consists of flashbacks. How do you show flashbacks in live theatre given such limited space? Mike Turczynski did it superbly. He not only directed the show, but also designed and built the set. The upstage platform served mostly as Tony's office, and the downstage portion began as Dr. Feldman's office. However, the action was fluid, the actors using each half as other locations, and sometimes moving between both in the same scene. Yet throughout the show, it was always clear where and when we were. Lighting designer Maaz Ahmed and board operator Nolan Schoenle also merit praise, as lighting cues must be hit precisely in order for all of that to work.

Turczynski's show looks good, too. The furnishings are appropriate, and costume designer Heather Blair found nice items to evoke 1940s attire. If I'm going to be picky (and I usually am), there was a problem with the backdrop. It's a subtle line drawing of the studio backlot outside Tony's office, and it looked lovely – except when scenes took place in that office. In those cases, the window bars cast a distracting criss-cross shadow on the drop. This didn't degrade my experience, but it was something I noticed. Like I said, I'm picky.

You don't have to be a fan of a particular cartoon mouse or redheaded mermaid to enjoy Something Intangible. It's a vivid look inside the lives of people with needs and failings, caught in the chaos of creation. Turczynski noted in the program that their goal, like that of all artists, was to create a brilliant moment. They did so beautifully, and I urge you to bring your friends and enter their wonderful world.

Something Intangible runs at the Playcrafters Barn Theatre (4950 35th Avenue, Moline) through July 21, and more information and tickets are available by calling (309)762-0330 or visiting Playcrafters.com.