To Grandmother's House He Goes: “4000 Miles,” at the Playcrafters Barn Theatre through October 13 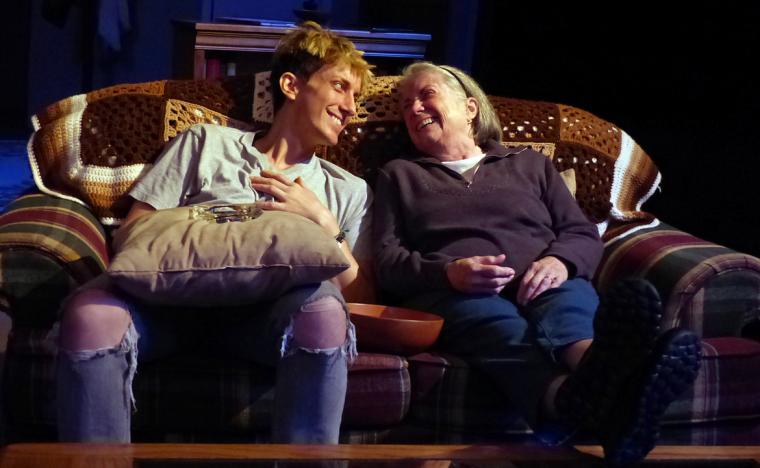 As an offering in the Playcrafters Barn Theatre's Barn Owl Series comprised of newer shows with lower ticket prices, 4000 Miles runs for only three days, so you can't put off seeing it this weekend. You also can't put off seeing it because … . Well, you just can't. With its compelling script by Amy Herzog and the talents of director Jennifer Kingry and her crew and cast, this particular production has the pedigree to be a must-see show, and it proves its lineage.

The small audience at Tuesday night's rehearsal was mostly composed of folks who couldn't attend the weekend performances because they're involved in other area shows. And though Board of Directors member Bruce R. Duling emphasized, during his welcome, that this was a rehearsal, I've seen many productions that weren't this polished on their final weekends.

Herzog's play debuted off-Broadway in 2011, and was a Pulitzer Prize for Drama finalist in 2013. The word "drama" traditionally has implied great seriousness, and these days has come to mean overblown emotional outbursts. This show is not grim, and there are no histrionics. Rather, the material is true-to-life, as are the portrayals. Some of its best moments are expressed with a look, or with quiet words in near-darkness. As in real life, there are both tragedy and laughs in the mix.

The set, a Manhattan apartment, is professional-level excellent; the designer is uncredited, but I suspect it's Kingry. She is the light and sound designer and operator, and I appreciated her expert use of levels and qualities of light throughout. 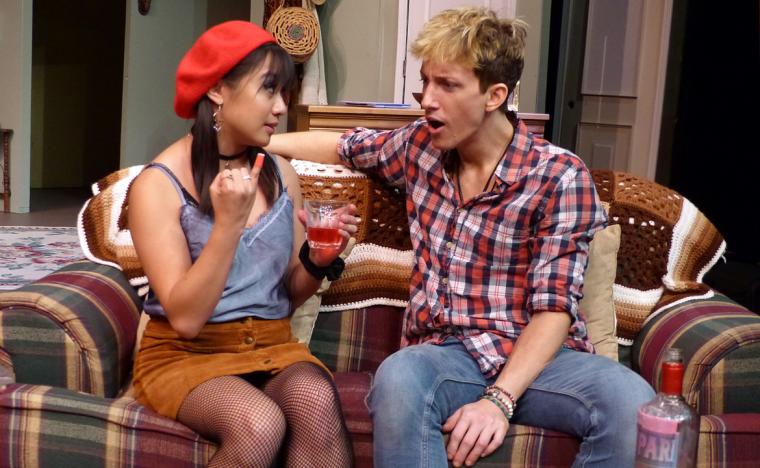 The always-wonderful Rae Mary plays Vera, who lives independently, her children and grandchildren far away. Mary's natural performance style led me to imagine I was spying on a real woman via security cam (and feeling a little guilty about it). Though capable, with a sharp mind, Vera laments that the worst thing about growing older is losing her words. The playwright gives Vera a lot of verbal floundering to do, and Mary pulls it off realistically without hampering the flow of the show – a tricky achievement.

Adam Cerny brings Vera's grandson to life with his eternal adroitness. I expected Cerny to infuse Leo with his own youthful energy. However, in this role his aura is even younger – he's a 21-year-old who much of the time feels he owns the world and knows it all, bestowing his tenets on how life should be led. There's pain behind the bravado, though. Few actors can match Cerny's skill at physical acting. His loose-limbed Leo casually slouches, sprawls across a chair, collapses onto a couch. At one point, while trying to read during Vera's attempts at conversation, he slides the book up to his face – and Cerny makes this simple, subtle move hilarious.

4000 Miles takes place during Leo's visit to Vera as he nears the end of a coast-to-coast bike trip, and their mutual fondness scuffles with awkwardness, at first. Leo has another fond/awkward connection with Bec (Elizabeth Melville) – one that has an entirely different tone. He tries to reignite their sporadic relationship, alternately trying to pick up comfortably where they left off and attempting to disarm her with his charm, but Bec's not biting. Melville, here, is another excellent actor playing younger than her actual age. Her voice and face display indifference, while her shifting from foot to foot and crossed arms show yearning, anger, and ambivalence. In her first scene, I felt exactly where she was emotionally before she even revealed the reasons for their falling-out. I saw Melville a couple of months ago in Playcrafters' outstanding She Kills Monsters, and was thrilled that I got to enjoy another of her performances so soon after. 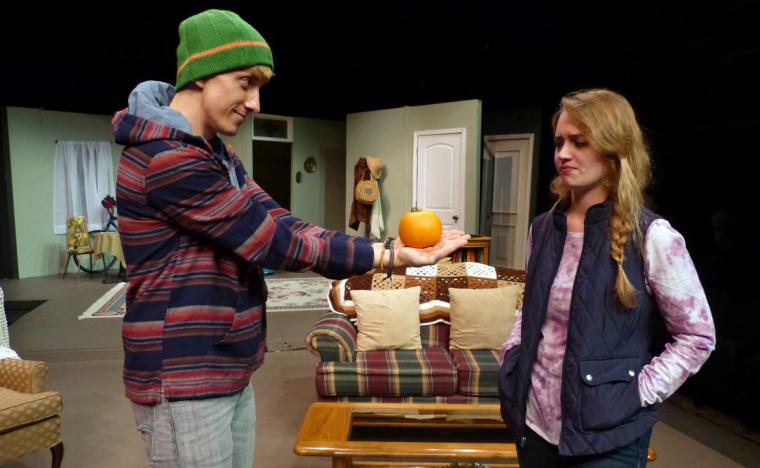 Right after intermission, Mary Sales, as Leo's new acquaintance Amanda, bounces in, relieving the tension of previous scenes with highly amusing adolescent exuberance. Like the rest of the cast, she is genuine. Though Amanda is a showoff, Sales is not – a critical distinction. The actor is in complete control of this character who knows what she wants and retains her sense of self even when vulnerable. Unfortunately for me, I missed the end of Amanda's exit line that broke up the house, as it was too quietly delivered for my ears. (Listen for it – it's a good one.) I saw Sales in Augustana's How to Succeed in Business Without Really Trying this past spring, and she handles this larger part adeptly. I hope to see her onstage again soon.

Vera's bond with Leo evolves satisfyingly as the play progresses. Too often, a show's characters merely carry out a plot, and at the end are just happier or sadder versions of themselves at the start. In this production, though, the performers manifest their characters' changes throughout.

Herzog based some of the 4000 Miles characters on her family members. Most writers incorporate real-world inspirations into their works, but not all can convey them so convincingly. Make it a priority to watch this absorbing story unfold. You may or may not feel like a voyeur, as I did, but relish it in your own way – you likely won't get more entertainment per dollar than you will at Playcrafters this weekend.

4000 Miles runs at the Playcrafters Barn Theatre (4950 35th Avenue, Moline) through October 13, and more information and tickets are available by calling (309)762-0330 or visiting Playcrafters.com.