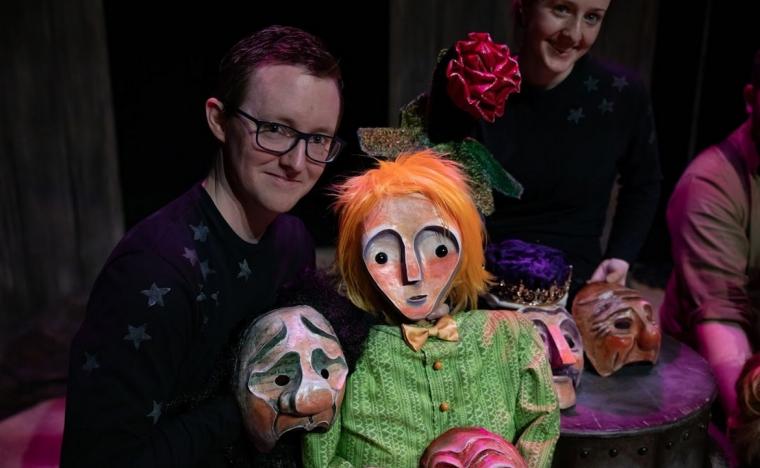 After its successful run at Davenport's QC Theatre Workshop this past spring, author Aaron Randolph III's new adaptation of the literary classic The Little Prince lands at St. Ambrose University for two performances on December 7 in a presentation boasting an expanded cast, plus direction and original puppet creations by the original production's “Little Prince” himself, SAU's theatre-department associate professor and chair Daniel Rairdin-Hale.

First published in 1943, Antoine de Saint-Exupéry's The Little Prince is the story of a pilot whose plane crashes in the Sahara desert, leaving him desperate to find a way home. During his trek, however, he inexplicably encounters a little boy who claims to be a prince exploring the cosmos and traveling from one world to the next. The pilot consequently comes to realize that there is perhaps much he can learn from this strange little boy, and what follows led to the book becoming one of world literature's most well-loved and universally popular works.

Since its publication, Saint-Exupéry's masterpiece has been translated into more than 300 languages and dialects and has sold nearly two million copies annually, and with its current sales of more than 140 copies worldwide, it is one of the best-selling books ever published. With The Little Prince's new, puppet-filled stage treatment written by Davenport playwright Randolph, whose student-performed comedies for Davenport Junior Theatre have included stage adaptations of The Emperor's New Clothes and 20,000 Leagues Under the Sea, the show's debut at the QC Theatre Workshop in April led River Cities' Reader reviewer Madeline Dudziak to praise its “expert puppetry” and call it “a show to remind you of love, friendship, and the effects of loneliness.”

Director and puppet designer Rairdin-Hale acted as puppeteer for the Little Prince character in the QC Theatre Workshop's springtime presentation of the show, and additional directing credits at St. Ambrose include Noises Off, Columbinus, and Commedia Dell'arte. For the university's Little Prince, the title character will be played and puppeteered by Joseph Lasher (Big Fish, Rumors), with the narrator role of The Aviator portrayed by Jeremy Mahr (the Prenzie Players' Macbeth, the Mississippi Bend Players' A Green River). Meanwhile, the show's ensemble cast of familiar Little Prince characters ranging from The Rose to The Fox to The Lamplighter is composed of Abbie Carpenter, Sarah Goodall, T.J. Green, Sam Lange, Luke Peterson, MaryRose Prosinski, Quinnie Rodman, and David Weaver.