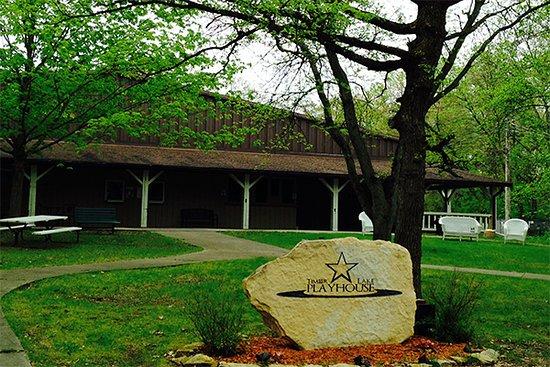 Dan Danielowski, executive director of the Timber Lake Playhouse in Mt. Carroll, discusses the theatre's operations during this period of social distancing. We spoke on Wednesday, May 20.

I had just signed all the contracts for our company members on March 12. Then the next day, I was working from home, and the kids came home from school and said, “Hey, we're not going back.” And all of a sudden, over the weekend, we started hearing some things [about Illinois closures], so I called the theatre quick and said, “Did those contracts get sent out?” They said, “No.” And I said, “Good.” (Laughs.)

I tell you what, that's the one thing in our overall plan that we accidentally did right, because we've never had a force majeure clause in our contracts. So we re-wrote all the contracts with force majeure, and then when it was becoming obvious that we weren't gonna start our season in May, we said to everyone, “Look, your offer still holds, but it's not looking good for May, and once we figure out what we're gonna do, we'll contact you.” And we've only had one person to date – and she was an intern, so not even a paid position – that had to say no to the contract, and it was because of family illness.

We've done about three Zoom meetings with all of them to kind of bring them up to date, and we've done e-mails about every two weeks letting them know what we're doing. And almost all of them right now are volunteering to do an online reading of our world-premiere show [What a Wonderful World]. Just having group meetings reading the script. They're on every night with Paul [Stancato, TLP's artistic director], and the writer and the songwriter are taking notes on what needs to change.

The bottom line is that everyone's in the same boat – no theatre in the country is running right now. Paul and I are on weekly roundtable meetings with about 85 theatre owners, or people that run not-for-profit theatres, and I would say half of them have totally canceled their seasons, and the other half are still hanging on to a hope that they can open. But you know, some of the top theatres in the country have canceled their whole summer seasons, and quite a few of the year-round theatres have canceled through the end of this calendar year. Even right now, with Broadway saying they're hoping for the first of September, they're just hoping that. They don't know.

And that's where the problem is. You see the stuff that Governor Pritzker has put out with his five-phase plan and you go, “Five phases, he's figuring 28 days at the minimum for each phase … “, and you count that up and go, “Oh, we'll be in phase five in August.” But then a couple days ago, he put out a statement that said, “You're not gonna like to hear this, but it's gonna be a long time before we ever hit phase five. We're gonna have to have a vaccine before we hit phase five.” And then you listen to the vaccine folks, and they're saying that's a year away.

All of which is to say it's very difficult to know how to plan. At Timber Lake, I use a four-phase plan: (1) Is this something the theatre should do?; (2) Do we have the manpower to be able to do it?; (3) Is it economically sound?; and (4) Will our patrons enjoy it? With that kind of plan, it's pretty easy to make decisions, you know? (Laughs.) But with this, there's no absolute there at all. There's nothing for us to make an absolute decision on. And then once we are open, are people gonna feel comfortable enough even to come?

We just did a survey that basically asked: When we do re-open, will you be back right away, will you wait a couple weeks, will you wait four to six weeks, will you wait two months or more, or will you not be coming back? So far, we've had about 250 responses, and 50 percent of the people said they were either coming back right away, that was about 36 percent, or within the first couple of weeks. About 40 percent of them said probably in a couple months, and only three, I think, said they weren't coming back. And 250 people is a pretty good-sized sample. So that's encouraging.

But of course, we don't know when this [re-opening] will be. The official plan that's still out there has us starting again in July and canceling or postponing everything through the end of June. But if we open in the fall, we would be doing a shorter version of this season, and an alternate version. We would probably be looking at three of the shows remaining the same, two of the shows being different, and then adding the Christmas show into the subscription series.

That's actually going really well! I think last week we had about 60 viewers on Facebook and 50 on YouTube. But afterward, we've had up to 2,500 views of the shows during the rest of the week, because they stay up online after they're recorded.

One of the things that is becoming a real benefit from me having 14 hours a day to sit at my desk (laughs) is that I'm really becoming more attuned to all of our marketing. And we are doing some incredible social-media marketing at this point, and TLP Live is one of those things. This weekend [on May 24], we'll have the writing team for What a Wonderful World as our guests, and then at the end of the show, our music director and one of the actresses are gonna do a little preview snippet of a song.

And we're gonna start doing reunion shows, too. The first one we're working on is a Mamma Mia! reunion. We've got the three couple couples committed to that. And we're working on a company reunion from 1984 – I think that's the company had [Tony Award winner] Jayne Houdyshell in it. I don't know if we'll be able to get her back, we've reached out to her, so we'll see.

It's becoming a real love fest when we bring them [TLP company members and alumni] on at night. I had someone say to me, “I think that's probably good for the people who are on the show, but maybe for the ones listening, they're getting a little sick of that.” (Laughs.)

We're gonna try to do videos, but that's a little more dicey, because we've got to get special permission from the licensing companies. A couple of them have just come out with a policy that basically says their entire books are available for you to do that, which means if you have archive videos, you can start showing them. The problem is, legally, all we can show is archive video, which means one camera in the back of the theatre. And I'm not sure people want to look at two-and-a-half hours of a rock musical that's gonna be recorded that way. Especially when they're used to seeing 16-camera shots on BroadwayHD. They're gonna look at this and say, “It looks like a high-school show.” (Laughs.) So I'm not really sure how we can do that.

But there are a couple other things that we are looking at, and one of the things we're actually in the process of working on right now is the education program. Our education director is starting work on this virtual-education program where we're going to have these great names … and I'm not at liberty to say any of them yet. (Laughs.) But very soon, we're gonna be able to say, “We've got so-and-so from this show, and you'll know this name from this show, and they're all doing classes for us.” We're hoping to be able to roll this out a week from Sunday.

We're looking at a way to hopefully broadcast the final reading of some scenes from the [What a Wonderful World] workshop that we're doing. And we're looking at a way of maybe doing a concert online, having some of our actors who have gone on to bigger and better things share a song, and put that together as a show. And try to monetize it in some way.

I mean, the theatre's not going to close or anything. I'm not predicting that this will be the demise of the theatre. There's no way in hell we'd let that happen. If [TLP founder] Andy Bro was able to handle the theatre burning down [in 1974], we can handle a pandemic, right? (Laughs.) But we're gonna have to find some creative ways to fund-raise, and to keep our contributing patrons – and even those who don't typically contribute – contributing to us.

How to Support TLP … and Each Other

People can help in ways from “I'm gonna donate the tickets I bought and not ask for a refund” to “I give you $5,000 every year – here's my $5,000 for this year, too.” And buying a season pass is absolutely something someone could do to help. You know, if you buy a season pass, you're gambling that we're gonna have something – but you will have options with that. People can donate it to us, they can move those tickets to next year's subscription series, they can ask for a refund.

People can also do gift certificates, and of course, straight donations are always good. We were able to receive the Payroll Protection loan, so we were able to keep our staff hired, and we're still answering phones. Our box office is answering our administrative phones, and they're answering 10 to 5 Monday through Friday.

In the meantime, we're getting all the cabins ready. We have two workers on-site for social distancing – one works on one side of the property, the other works the other side. And even if we're not open, people drive past the front lawns, so we've got to keep that mowed and looking nice, otherwise it's gonna start looking like we're not here anymore.