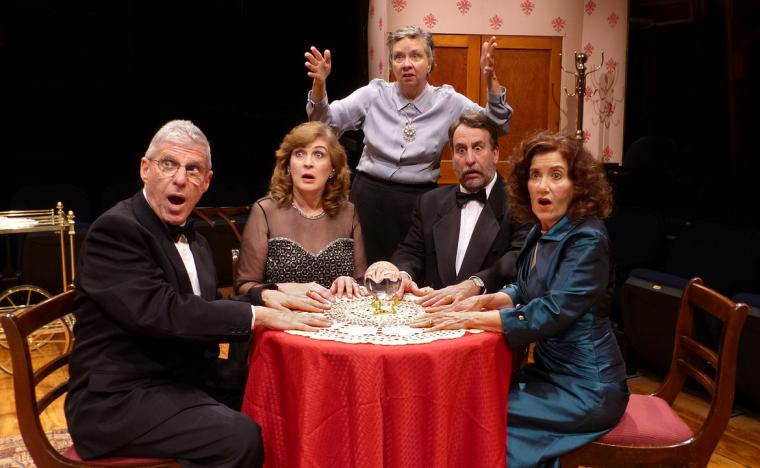 Is it a success or a failure when a ghost appears during a séance if you don’t actually believe in the occult? The Richmond Hill Players allow you to decide for yourself with their latest production: a delightful take on the ghostly comedy Blithe Spirit.

A Noël Coward classic, Blithe Spirit tells the story of skeptic novelist Charles (James Driscoll) who, while researching for his latest novel, decides to host a séance with the help of medium Madame Arcati (Lona Friedman) and his friends. But when the ghost of his first wife Elviria (Ann Keeney-Grafft) actually appears, Charles has to find a way to manage the mischief she causes.

During Friday’s performance, director Tom Morrow brought us into a world that was, dare I say, over the top. Right away, we meet Charles’ second wife Ruth (Diane Greenwood) as she instructs her new maid Edith (Elizabeth Shaffer) in how the evening ahead should go. Edith effortlessly became my favorite character of the evening with her hilarious sincerity in trying to please Ruth, and Schaffer’s gait, whether fast or slow, was always funny. Meanwhile, the bulk of the other actors portrayed a world that felt a bit like an over-dramatic and stereotypical telenovela, including exaggerated physical movements. While Blithe Spirit wouldn’t have to be overly stylistic, once I embraced the directorial choice, I found I rarely thought of it again. 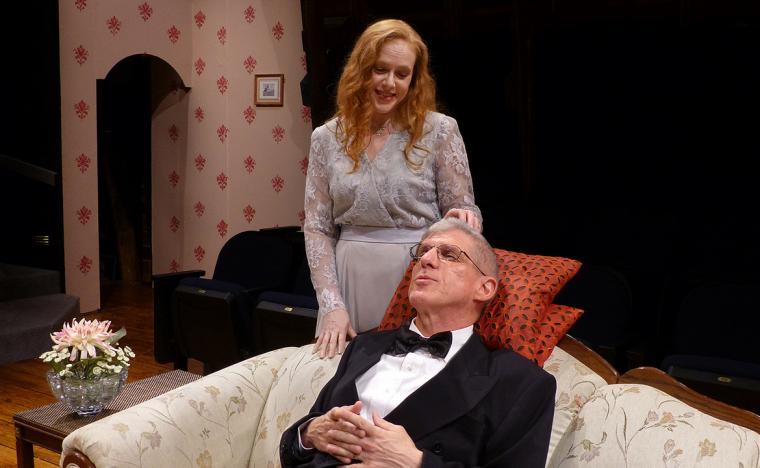 While Driscoll’s Charles had a tendency to bumble about the stage, never quite sure-footed, Driscoll handled his large role beautifully. Driscoll’s choices made it tough to believe that Charles was particularly fond of either Ruth or his late wife Elvira – which, as the night wore on, turned out to be not far from the truth. When his invited dinner guests arrive for the evening’s festivities, the dramatic flair amplified because Dr. Bradman (Gary Talsky) assumed an inflated-and-pompous mannerism only offset by his wife's propensity for outsize facial expressions. Talsky and Heidi Pedersen, who plays Mrs. Bradman, were well-matched, and their characters would have been quite annoying had the two not fully engaged in the ridiculousness asked of them. Luckily, they did, and this production is all the finer for it.

Meanwhile, when Madame Arcati arrives at the house, Friedman absolutely steals the show. As an eccentric clairvoyant going in and out of trances throughout the two acts, Friedman had every opportunity to lean into the ridiculous. However, while her physical demeanor was a bit silly, she was the least outrageous character on the stage. And had Friedman attempted to top the other characters’ ham, this production would have tipped toward unbearable. As it was, though, Madame Arcati’s appearance as the sanest person in the room brought depth to the story, especially since, clearly, she isn’t completely off her rocker, given that Elvira appears within minutes of the séance's start.

Coward can be wordy, and through no fault of Morrow's actors, some of the longer back-and-forth dialogues seemed to drag. But those moments were easily forgotten thanks to the triangular conversations between Ruth, Elvira, and Charles. Greenwood was brilliant in these moments, as Ruth couldn’t hear or see Elviria (even though Greenwood absolutely could). Ruth’s frustrations with hosting her husband’s dead wife’s ghost in her home were absolutely understandable and watching Greenwood get boiling mad and yell three feet in the wrong direction was marvelously comical. 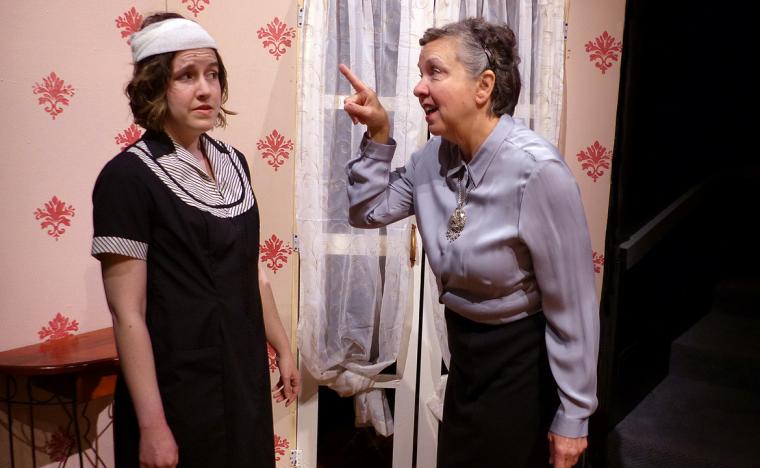 Meanwhile, Keeney-Grafft’s Elvira danced and swayed across the stage in a manner quite becoming of a ghost. As Keeney-Grafft flitted and floated around her former abode – with the set constructed by Justin Raver – she was clearly having a fantastic time with her supernatural role. The Barn Theatre felt elegant while still maintaining a sense of comfort; it wasn’t too formal, for instance, for a number of characters to put their feet up on the sofa. It was almost a shame when Elvira, attempting to convince Ruth of her presence, got a tad destructive with the set and it’s furnishings, but it was wonderfully shocking and raised the stakes of the evening when she did.

Noël Coward wrote the very specific song “Always” into the script, but I was completely impressed with sound designer Jennifer Kingry’s choice to not use a version with lyrics during the performance. While the tune became increasingly familiar as the night went on, if you weren’t paying too close attention at the end of intermission, you may never have actually picked up on the lyrics at all. Kingry also served as the production's lighting designer, and her effects were simple but effective, with the especially well-executed séances suggesting intrigue in a subtle way. The actors brought enough nonsensical energy to the stage that what subtlety we received was appreciated, and Suzanne Rakestraw’s tasteful costumes were also worthy of appreciation.

Throughout this production, Charles finds himself torn between past and present, but I was not torn one bit: Morrow’s shamelessly melodramatic Blithe Spirit is successful in nearly every way.

Blithe Spirit runs at the Richmond Hill Barn Theatre (600 Robinson Drive, Geneseo) through June 9, and more information and tickets are available by calling (309)944-2244 or visiting RHPlayers.com.