No Business Like Snow Business: “Miracle on 34th Street: The Musical,” at the Spotlight Theatre through December 15 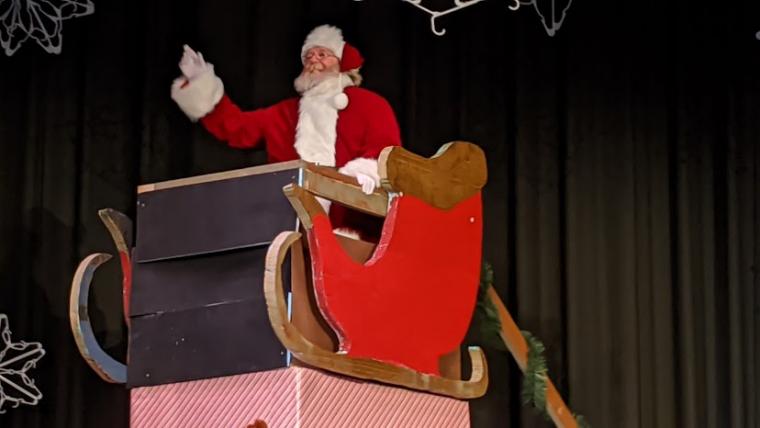 John VanDeWoestyne in Miracle on 34th Street: The Musical

If you need some inspiration to help you get into the holiday spirit, then you should check out the Spotlight Theatre’s current production of Meredith Willson’s Miracle on 34th Street: The Musical. I was lucky enough to catch a dress rehearsal on Tuesday night and it was delightful. Director Chris Tracy's production of this show I'd never seen before was already polished and ready to go with fantastic singing, dancing, and acting.

The musical version Miracle on 34th Street is based on the 20th Century Fox picture, its story by Valentine Davies and screenplay by George Seaton. This classic tale of Kris Kringle (John VanDeWoestyne) takes place during the annual Christmas celebration at Macy’s department store, where Kringle has been hired by department store manager Doris Walker (Kristen Marietta) and is consequently put on trial to determine if he is indeed the “real” Santa Claus.

Tracy's presentation featured beautiful, large, intricate snowflakes – compliments of the director and co-scenic designer Brent Tubbs – hanging from the ceiling against a black curtain, and the moving sets themselves were creative and slid around the stage effortlessly from scene to scene. At one point, we even find Santa high above a staircase in his sled as the cast members twirl him about for a great parade effect. 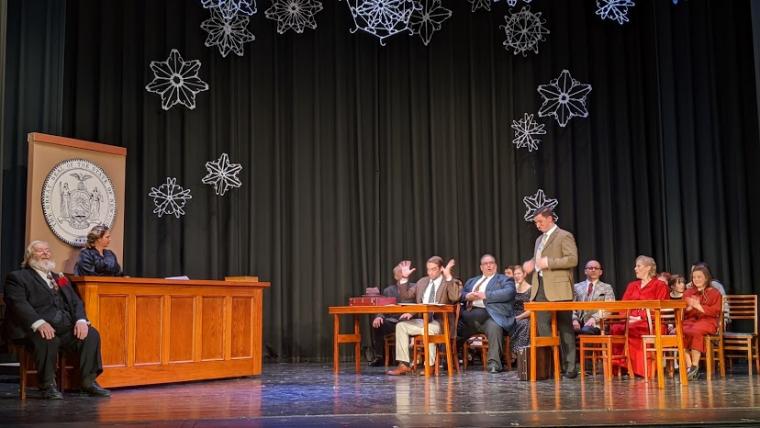 Alexis Lotspeich's costumes were spectacular, boasting a wide range of designs for a multitude of characters including a winged angel, a soldier, ballerinas, a police officer, a clown, and a lion. I was amazed at how colorful and vibrant everything was, as well as how neatly everything fit on the stage space. I especially enjoyed the little girls in the ensemble who wore bright green tutus with candy-striped stockings; they reminded me of the munchkins from The Wizard of Oz who came out as a trio to perform a festive dance. Speaking of dance, Becca Johnson put together some nice choreography that was entertaining and well-executed by the ensemble. The steps really lined up well with the music and flowed smoothly from one move to the next.

As for the actors, Van DeWoestyne was a regal-looking Kris Kringle with a full white beard and long hair. He had sort of an Orson Welles thing going on, as his demeanor was calm, cool, and collected, with very soothing vocals to match. Marietta seemed equally confident and relaxed on stage, which made her a good fit for the role of Doris. As the show's leading lady, Marietta has the look, talent, and voice to really pull this character off, and portraying Doris' daughter Susan, Avie Birdsell was outstanding, especially for such a young actress. She blew me away with the way she believably delivered her lines, making it all look easy.

Under the musical direction of Megan Warren, all the performers seemed to shine in their individual numbers, and Taylor Bley definitely crooned his way into my heart as the dapper lawyer Fred Gaily, who eventually wins the love and admiration of Doris. In my opinion, Bley tended to overact just a little bit, but when he started to sing, you could see him relax and get comfortable. And what a rich voice he has, demonstrating excellent breath control and intonation. 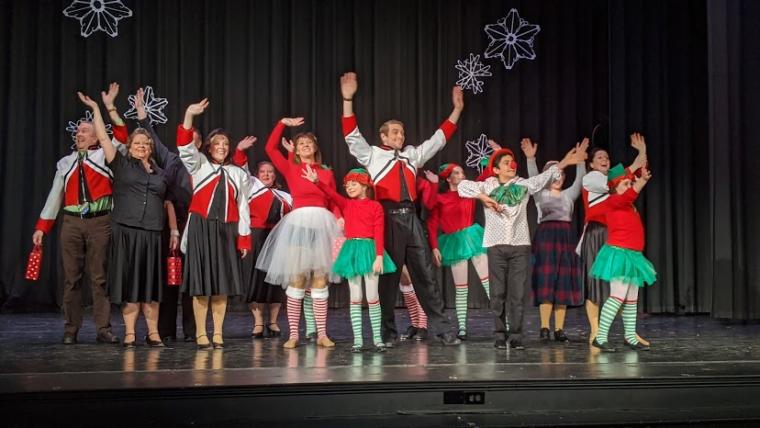 Kevin Moore was a jovial R.H. Macy and paired up great with his sidekick Marvin Shellhammer portrayed by the fabulous Brent Tubbs, who, at one point, was sporting an oversized trench coat, fedora, and rounded black glasses. He reminded me of Inspector Gadget as he chased a drunk Santa (Brandon Gale) down off the platform and through the audience.

But the performer who really stood out for me – and with a wonderful Jersey accent, to boot – was Amelia Fischer, whose character Mrs. Sawyer was a saucy, hilarious firecracker. This young lady is a natural, and I thoroughly enjoyed her performance. Meanwhile, the entire Tubbs family seems to be blessed with exceptional talent, as shown in the outstanding work by Taylor Tubbs as the little Dutch girl Henrika, Sara Tubbs as Henrika’s mother, and Cooper Tubbs as the adorable Tommy Mara, Jr.

Another of the show's impressive touches found cast members coming out amongst the audience during a song and tossing candy canes to patrons, but as a whole, the entire ensemble was a continual joy to watch. I left feeling lighter and excited about this magical time of the year, and the Spotlight Theatre’s Miracle on 34th Street: The Musical is sure to be a big hit for the entire family. What a wholesome way to spend time together enjoying local theatre at its best.

Miracle on 34th Street: The Musical runs at the Spotlight Theatre (1800 Seventh Avenue, Moline) through December 15, and more information and tickets are available by calling (309)912-7647 or visiting TheSpotlightTheatreQC.com.