“She Kills Monsters,” November 14 through 17 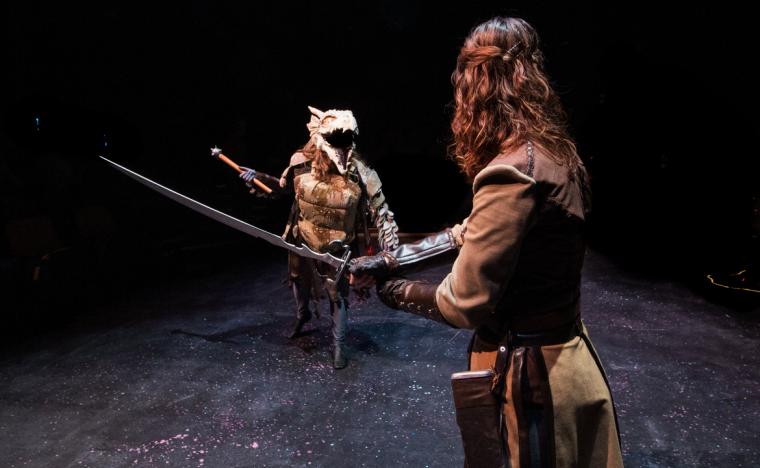 Elise Campbell and ??? in "She Kills Monsters" at Augustana College -- November 14 through 17.

Described by the Chicago Tribune as “clever, funny, moving, lively, and geeky,” and filled with what Time Out Chicago called “deliciously dorky references to the early days of the Internet,” the Dungeons & Dragons-fueled comedy-drama-action-adventure She Kills Monsters enjoys a new staging at Rock Island's Augustana College, its November 14 through 17 run guaranteed, according to the New York Times, to “slash and shapeshift its way into your heart.”

Written by award-winning playwright Qui Nguyen, She Kills Monsters tells the story of Agnes Evans, a young woman grieving for her deceased sister. The Evans siblings never were especially close, but after Tilly’s death, Agnes discovers a notebook containing a game scenario that her sister created. Tilly, it turns out, was a well-known and widely respected Dungeons & Dragons player passionate about online fantasy gaming, and in order to unlock more secrets about her mysterious young sibling, Agnes recruits the “dungeon master” Chuck to help her understand and grieve Tilly. Chock-full of supermodel elves, dominatrix warrior women, and nasty ogres, She Kills Monsters is also an unexpectedly sweet tale of friendship, loss, and acceptance that the New York Times labeled a “deceptively breezy and rather ingenious comedy” that's “kind of invigorating and kind of remarkable.”

“This is a different kind of production for us,” says director Jeff Coussens, Augustana's Professor of Theatre Arts whose recent productions for the college have included The Three Musketeers, The Madwoman of Chaillot, and Othello. “It's part fantasy, part drama, part comedy – with a heavy emphasis on the fantasy. The script presents unique challenges in having to create the two ‘worlds’ of the play: the Dungeons and Dragons world and the realistic 1990s world, neither of which are completely familiar for our students.” He adds, “This popular contemporary piece is not to be missed. It gives us an opportunity to highlight our technical talent through fanciful costumes and projected scenery and create a unique theatrical experience.”

She Kills Monsters will be staged at Augustana College's Brunner Theatre Center November 14 through 17, with performances at 7:30 p.m. on Thursday through Saturday and 1:30 p.m. on Sunday. Admission is $10-15, and more information and tickets are available by calling (309)794-7306 or visiting Augustana.edu.