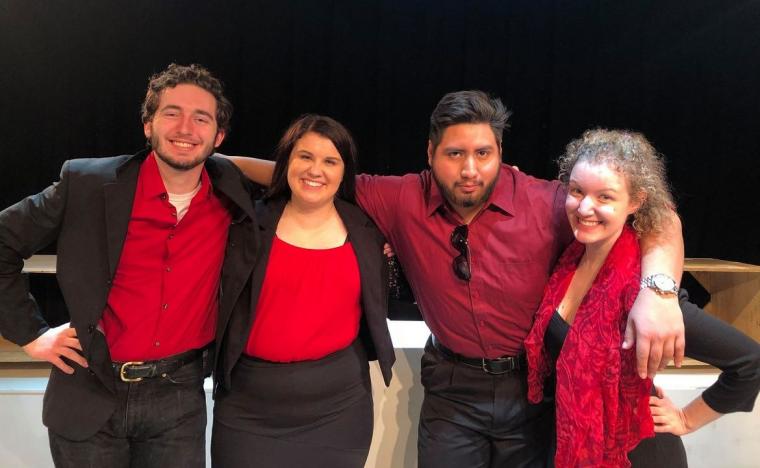 Tyler Hughes, Abigail Carpenter, Andres Garcia, and Jaren Schoustra in "The Shape of Things" at St. Ambrose University -- February 13 through 15.

Lauded by Theatre Mania as a “mean and marvelous” play that “has more surprises than a case full of Cracker Jack boxes,” author Neil LaBute's biting and evocative drama The Shape of Things serves as the latest student production in St. Ambrose University's Black Box Theatre, its February 13 through 15 run signifying why CurtainUp deemed it a “must-see” that “leaves the audience with much to talk about.”

With LaBute's theatrical résumé including Reasons to be Pretty, Fat Pig, and Some Girl(s), The Shape of Things finds its author asking – and inviting us to ask – such questions as: How far would you go for love? What concessions would you make? And what price would you be willing to pay? A modern day re-telling of the fall of man, The Shape of Things centers on Adam Sorenson, an English literature major at a fictitious Midwestern college. One day at a museum, Adam meets Evelyn Ann Thompson, an attractive graduate student in the art program, and his life takes an immediate and unexpected turn. Never having the best success with women, he's flattered when Evelyn shows an interest in him, and, at the young woman's suggestion, Adam soon gets a new hairstyle, begins a regular exercise regimen, eats healthier foods, dresses more stylishly, and begins acting more confident and dominant. These changes are well-received by Adam's friend Phillip and Phillip's fiancée, Jenny, and Adam has never been happier. But are Evelyn's intentions quite what they seem? A production that challenges deeply entrenched ideas about art and love, LaBute's stinging drama was described by The Guardian as a “tantalizing” work about “society's preoccupation with surfaces and the thin dividing line between genuine provocation and attention-seeking.”

Directing The Shape of Things is St. Ambrose junior Ellie Larson, whose performance credits at the university have included recent productions of Tartuffe, Rumors, and Rabbit Hole. And with Andres Garcia (from this past fall's Big Fish) and the debuting Jaren Schoustra portraying Phillip and Jenny, the roles of Adam and Evelyn are enacted by Tyler Hughes and Abigail Carpenter – the former a castmate in St. Ambrose's Time Stands Still and Picasso at the Lapin Agile, and the latter a co-star in The Little Prince and Speech & Debate.

The Shape of Things will be presented in St. Ambros University's Studio Theatre in the Galvin Fine Arts Center February 13 through 15, with performances at 7:30 p.m. on Thursday and Friday and 3 p.m. on Saturday. Admission is $7, and more information and tickets are available by calling (563)333-6251 or visiting SAU.edu/theatre.