Sesame Treat: “Avenue Q,” at the Playcrafters Barn Theatre through May 19 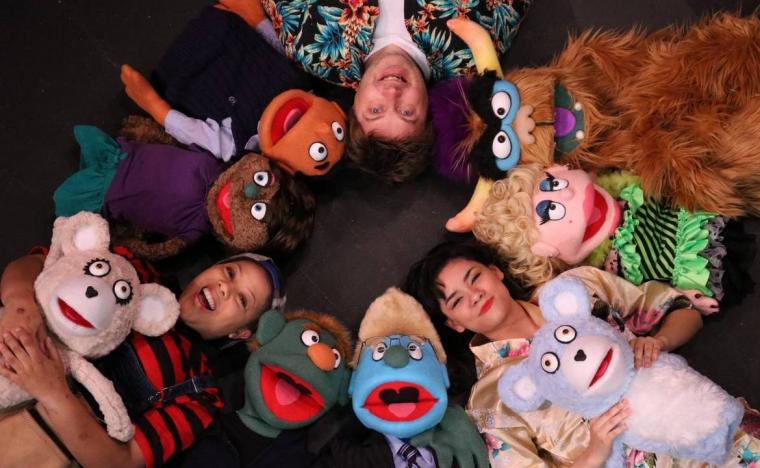 Though it expresses both the highs and lows of life, the Playcrafters Barn Theatre's Avenue Q – the three-time Tony winner with music and lyrics by Robert Lopez and Jeff Marx and book by Jeff Whitty – is an uplifting treat overall, packed with superb performances.

Directors Mike Turczynski and Callen Brown, with puppet director/creator Seth Chappell, have blended talented entertainers and crew to tell this story, with Brown – who's also musical director and percussionist in the three-piece band – doing a fine juggling job. The amount of preparation, effort, and teamwork on and behind the stage is clearly enormous, and this latest in Playcrafters’ ambitious 11-shows-in-11-months season is a polished one.

Stylistically, the presentation mirrors that of a particularly beloved children's-television program. As in its TV version, humans, human puppets, and furry monster puppets live in a less-than-privileged neighborhood. In each, there are songs about feelings and coping with life. Both shows are funny and sometimes sad. However, Avenue Q is for adults. There is profanity. And sex. And there are stereotypes on display ... although they also facilitate real talk about them.

In his program notes, Turczynski writes that this musical may be “over the top.” I didn't find it so. The material was not meant to shock for shock's sake – to titillate solely in the hopes of being edgy. Avenue Q was certainly intended to be candid and funny, and it succeeds. It's also touching and affirming, and if the “naughty” parts happened offstage or were cut entirely, the show would still retain most of its substance and spirit. (My opinion was validated when I found out that there's actually a school-approved Avenue Q Jr. edition of the script.) 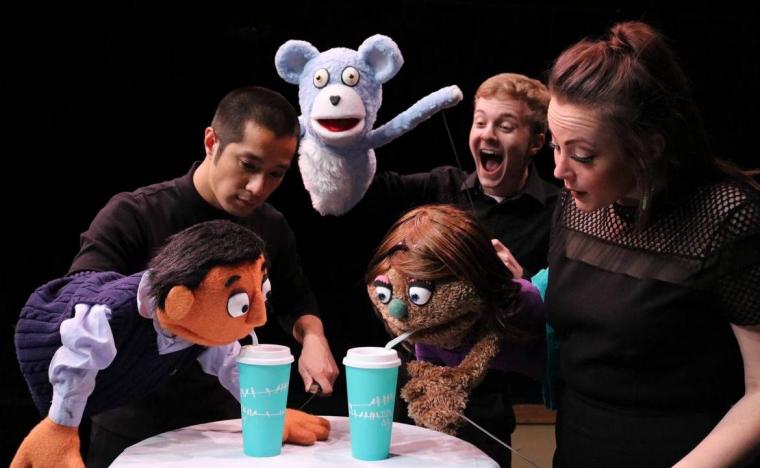 This musical is honest, and sweet at its core. Admittedly, there are songs here about glee in others' misfortunes and wanting to kill the one you love – but the show's message is ultimately positive. Many people can relate to one, if not more, of the characters' situations: being educated, but unemployed; working hard, but not achieving what you thought you should; having dreams and following them; wanting dreams and not finding them; yearning for, getting, and losing love and friendship.

The puppeteers, well trained by Chappell, met the incredible challenge of dual performances with aplomb. Each acted with face, body, and voice while simultaneously doing the same with one arm stuffed into a puppet's head and (usually) wielding a rod with the other hand to control its arm – a feat even Jim Henson didn't have to achieve. (Some puppets have another actor lending a hand, giving them two fully functional arms.) The cast accomplishes all this while singing and dancing, and without crashing into one another or falling off the set.

Every performance is also appealing and convincing, and though the actors have varying amounts of experience, the quality is high and consistent. Kory Cooper Bowers, who enacts Rod, lists puppetry and dance on his résumé, but I'd have guessed he'd been singing and acting his whole life, as well. Rod's roommate Nicky, played by Anthony Natarelli, proves that it's not that easy bein' green when his supportive friendliness is met with rejection.

Calvin Vo's Princeton and Madison Duling's Kate Monster were as appealing and energetic as leads should be. The multi-talented Vo is as fun to watch as his puppet (and much more expressive), while Duling's character is generally so cheery that her solo that closes Act I is jarring and especially affecting. Chelsea Ward is a joy as former child actor Gary Coleman, who stays chipper in spite of the neighborhood's collective conclusion that, out of all of theirs, his life is the worst. T.J. Green's Trekkie Monster is the neighborhood outcast, but the puppet pleased our opening-night Playcrafters crowd as ably as he pleased himself. And all nine of Chappell's puppets are gorgeous, crafted for this production in the distinctive style required. 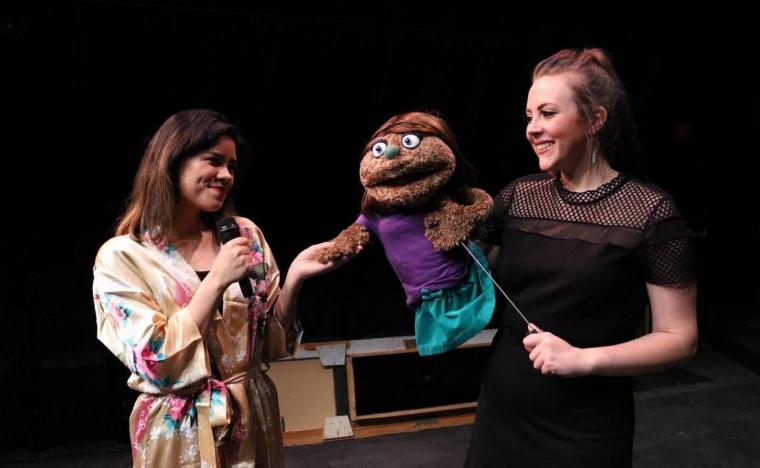 I do wish that the opening number – in which the cast was offstage with half of them behind the set and the rest behind the audience – had been staged differently. Not only were the performers' unamplified voices overwhelmed by the accompaniment, but those in back were a beat or two behind the backstage singers, making the lyrics largely unintelligible.

Unfortunately, there were other audibility issues on Friday. I missed a few too-quiet lines, and actors employing high-pitched voices needed to speak more clearly and a little more slowly to be understood. Plus, on the visual front, Turczynski's and Brown's performers at times stood shoulder-to-shoulder facing downstage, instead of standing staggered on a diagonal so that each could be seen from anywhere in the house.

These were just small hiccups, however, in Playcrafters' refreshing, satisfying performance, and a reassuring song about hope and endurance – accepting both what is and what may be – closes the show. I believe the creators of Avenue Q would give this production a standing O.

Avenue Q runs at the Playcrafters Barn Theatre (4950 35th Avenue, Moline) through May 19, and more information and tickets are available by calling (309)762-0330 or visiting Playcrafters.com.