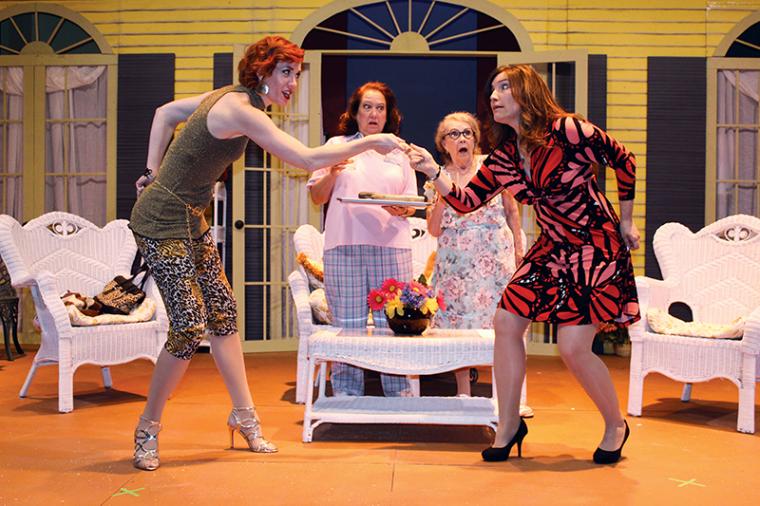 Sarah Hayes, Shelley Walljasper, Sherry Konjura, and Kim Kurtenbach in "The Savannah Sipping Society" at the Circa '21 Dinner Playhouse -- September 9 through November 7.

Returning with the venue's first mainstage production since theatres everywhere closed in mid-March, the Circa '21 Dinner Playhouse is set to bring audiences loads of laughs and warmth in the area debut of The Savannah Sipping Society, a new comedy of eternal friendship by the authors of such beloved stage works – and previous Circa '21 hits – as The Dixie Swim Club and Mama Won't Fly.

After a hot yoga class brings four “women of a certain age” together at the start of The Savannah Sipping Society, the ladies decide their sassy humor and Southern charms are better suited for solving life’s problems over cocktails. Over the course of six months and many hilarious misadventures, these middle-aged women successfully bond and find the confidence to reclaim the enthusiasm for life they’ve all but lost over the years. Together, they discover lasting friendships and a renewed determination to live in the moment – and most importantly, they realize it’s never too late to make new old friends. Written by the popular playwriting team of Jessie Jones, Nicholas Hope, and Jamie Wooten – whose other comedies performed in the area have included Dearly Beloved, The Red Velvet Cake War, Always a Bridesmaid, and Doublewide, Texas – the joyous and touching comedy The Savannah Sipping Society raises a glass to lasting friendships and the determination to live in the moment.

Due to the Phase 4 rules of Restore Illinois, capacity for each performance of The Savannah Sipping Society is limited to only 50 people in the 320-seat venue. For the safety of guests and staff members, temperatures will be taken when patrons arrive, and face masks must be worn to enter the theatre, when interacting with the staff, and whenever guests are away from their tables.

In addition to its preview performances on September 9 and 10, The Savannah Sipping Society will be performed September 11 through November 7 with performances on Fridays, Saturdays, and Wednesdays at 7:45 p.m.; Sundays at 5:45 p.m.; and Wednesday afternoons at 1:30 p.m. All shows will be preceded by meals and pre-show entertainment with the theatre's performing wait staff of Circa '21 Bootleggers, and more information and tickets are available by calling (309)786-7733 extension 2 or visiting Circa21.com.