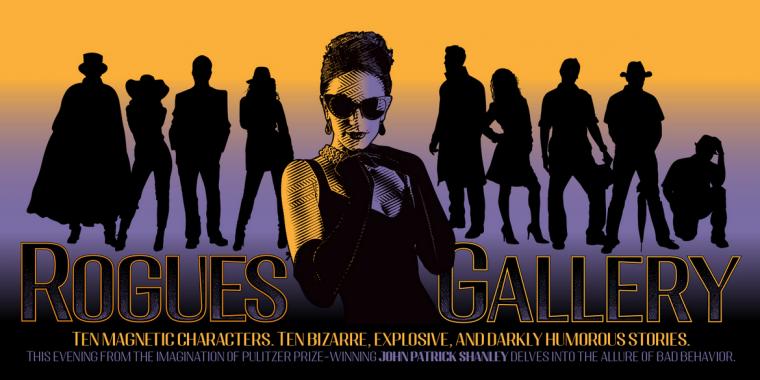 With the production's proceeds benefiting The Actor's Fund's COVID-19 emergency-relief efforts, students of Scott Community College will, from December 4 through 6, offer a virtual presentation of the darkly hilarious monologue collection Rogues' Gallery by playwright John Patrick Shanley, the Pulitzer Prize- and Tony-winning author of Doubt, and the Oscar-winning screenwriter of Moonstruck.

In Rogues' Gallery, 10 magnetic characters deliver 10 bizarre, explosive, and humorously offbeat stories that delve into the allure of bad behavior and the absurdity of being human. In “Unknown Caller,” a would-be fiancé wakes to a hangover and a missing engagement ring after a doomed proposal and night of heavy drinking, only to receive a phone call from a stranger who have hold the key to the ring's whereabouts. “Drive” concerns a cabaret singing struggling to find the authenticity in her performances before inspiration hits, while “Gaucho” finds an aggrieved descendant of the gauchos of Argentina seeking revenge on the man who seduced his wife. In “Artificial Leg,” a homeowner struggles to dispose of the prosthetic limb he discovered in the basement of his new townhouse, with the journalist of “Ditto” leaving her fiancé behind and diving headfirst into a new romance with someone holding an unsettling secret.

In “The Acupuncturist,” a patient switches medical professionals after the practitioner starts to believe he has magical powers, while in “The Clerical Line,” a wealthy bachelor collaborates with Burberry to create a wardrobe of priest's clothing – a uniform he deems most reflective of his soul and status. “I Was Right About Everything” finds a Bronx food-cart owner and teller of tall tales biding his time until the woman he loves realizes how exceptional he is; “The Choreographer's Hand” concerns a pianist prone to visions who begins to unravel the curious sequence of events that pushed him to kill. And in the most timely “Lockdown,” which is set during a global epidemic, a quarantined woman slips away from her boyfriend to make a phone call to her other lover.

Serving as director for the virtual Rogues' Gallery is SCC theatre instructor Kevin Babbitt, whose previous works for his department have included Gunplay, Sister Mary Ignatius Explains It All for You, and The Laramie Project, and whose on-stage area-theatre appearances include roles in the Richmond Hill Barn Theatre's The 39 Steps and the Playcrafters Barn Theatre's On Golden Pond and Tuesdays with Morrie. Ten SCC students, meanwhile, will portray Shanley's rogues' gallery of misfits, miscreants, and murderers, with the show's ensemble consisting of Sara Bolet, Arissa Constantino, Christian Gardner, Ben Herrington, Kassidy Holdridge, Samuel Knupp, Ethan Mason, Joseph Nguyen, Nicole Stocker, and Julian Totten.

Rogues' Gallery will be presented virtually from December 4 through 6, and $5 admission allows viewers a 48-hour rental of the production. The show is intended only for mature audiences, and can be screened by visiting ShowTix4u.com/event-details/42744.