On and Off the Rails: “The Boxcar Children,” at the Playcrafters Barn Theatre through February 16 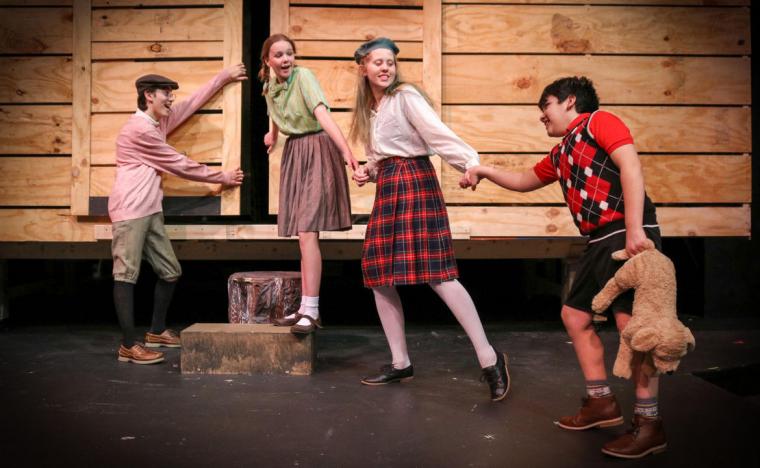 The Playcrafters Barn Theatre's presentation of The Boxcar Children opened on Friday with a simple, wholesome journey of four Depression-era youngsters and their adventures as recent orphans. Knowing that they will likely go to different foster homes, the Alden children escape into the woods and find a boxcar in which they begin to live, and while the set design was sparse, the actors, for the most part, were excellent – I found myself carefully listening to each character as they expressed their innermost thoughts and feelings. Like the old saying goes, "Less is more," and in this show, I found that to be particularly true.

Directed by Cynthia Taylor, with Barbara Field's adaptation based on the original book series by Gertrude Chandler Warner, this play, for me, felt a little bit like Little House on the Prairie minus the house, and adding the boxcar. Playcrafters' Boxcar Children required a lot of imagination to visualize the characters' outdoor surroundings such as the woods and the brook. At first, this kind of bothered me. But as the play went on, I totally forgot about the absent scenery.

Eventually, the boxcar itself was revealed to have been hidden behind a black curtain, and as the curtain was drawn, it was pushed forward and the set came to life. The builders did a particularly outstanding job with the distressed red color of this set piece and the greens of its surrounding foliage. At one point on Friday, as the youngest Alden child Benny (Abraham Gomez) tried to open the boxcar doors that were on sliding tracks, one door came partially unhinged and nearly fell off. Thankfully, however, he was able to navigate through the scene and get it back on track, much to the relief of the audience who gave the moment a round of applause. 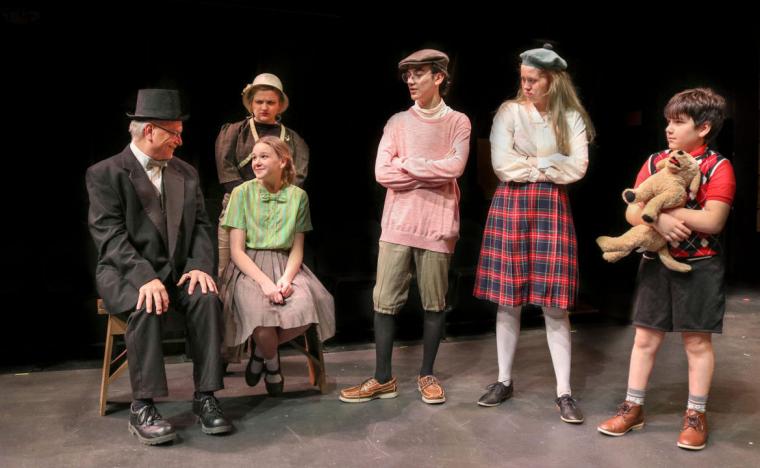 Coming to our area all the way from Nazareth, Palestine, as an exchange student, Ghazy Mahamid portrayed the oldest child Henry Alden, and the young performer was quite good in his role as the calm, hardworking, and humble protector of his siblings. I really enjoyed his subtle acting style and soft-spoken line delivery. Naoko Sambdman proved equally talented as Jessie, who is a motherly, bold, and fearless young woman of conviction. Isabella Belshause was also confident as the shy, sensitive sister Violet. And Gomez's Benny is adorable as he clings onto his stuffed animal, a doggy named Watch. This being his very first show, Gomez is a stage newbie, and the only critique I could give was he needed to speak more slowly and clearly when delivering his lines, as he was a bit hard to understand. That being said, for his first time acting in public, he did a great job. (These four youths, who will appear in The Boxcar Children again on February 14 and 16, alternate performances with the quartet of Thom Elliott, Chloe Hansen, Madalyn Roland, and Lennon Ross, who return to the show on February 15.)

Among the production's adults, all of whom play two roles each, Don Faust was hilarious as Cookie, a quirky hooligan from the streets who confiscated some apples from Jessie and did a little victory song and dance celebrating his thievery. Faust was also funny, in a Barney Fife kind of way, as Officer Banning. Meanwhile, one of my favorite actors of the evening was Nolan Schoenle, who played Dr. Sam Truman and Big Mike. Schoenle exuded charisma and charm in every scene he was in as he circumnavigated a cane with a limp, was very convincing in his demeanor, and left it all on the stage. 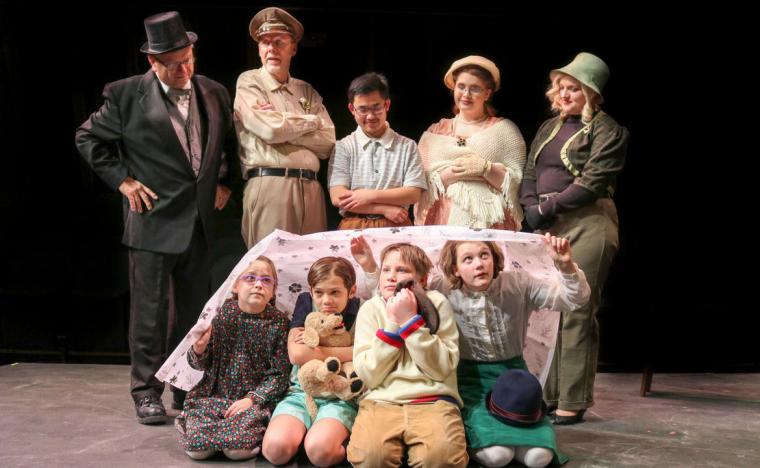 Rounding out the cast are Jenya Loughney as Mrs. Alberts and Mrs. Truman; Lauren Larson as Sarah, the hardworking social worker frantically trying to find the missing children; and Jim Strauss as the sheriff and Mr. Alden. Each member of the cast added his or her own personal flair to their characters, but at times the line deliveries were shaky – particularly those of Strauss, who, with his dialogue sounding very forced and overacted, seemed to be having an off night on Friday. But one of the things that really impressed me during the opening-night performance was how the actors covered for each other. When one of them forgot a line, or said the wrong line, another performer would quickly fill in the empty or awkward space, which the patrons appeared to appreciate.

As for the costumes, I thought designer Elle Winchester did an exceptional job with the basic skirts and dresses, accented by colorful hats, for the young girls, and social worker Sarah wore an adorable pantsuit with great accessories. Henry Alden, meanwhile, was decked out in pantaloons and suspenders suggesting something out of The Adventures of Huckleberry Finn.

Taken as a whole, Taylor's production was entertaining and refreshingly straightforward, and when unexpected difficulties arose, it became all the easier to appreciate the hard work that goes into pulling off a live stage show. Playcrafters’ presentation of The Boxcar Children was a lovely, family-friendly way to spend a relaxing evening at the theatre.

The Boxcar Children runs at the Playcrafters Barn Theatre (4950 35th Avenue, Moline) through February 16, and more information and tickets are available by calling (309)762-0330 or visiting Playcrafters.com.