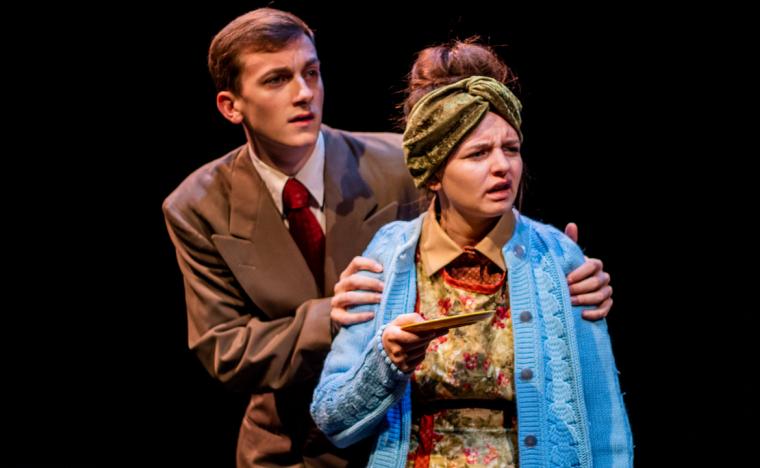 Peter Alfano and Amy Nicholson in Noises Off at Augustana College -- October 17 through 20.

A Tony Award-winning slapstick lauded by the New York Times' renowned theatre critic Frank Rich as “the funniest play written in my lifetime,” author Michael Frayn's Noises Off opens the 2019-2020 mainstage season at Augustana College, a rib-tickler that the New York Post called “the funniest farce ever written” and that Variety magazine praised for its “comedic brilliance” as “the kind of door-slamming, trouser-dropping, pratfall-prone, and utterly manic chaos that is pure farce.”

A Broadway smash in its 1984 debut, Frayn's Noises Off takes a fond look at the follies of theatre folk whose susceptibility to out-of-control egos, memory loss, and passionate affairs turn every performance into a high-risk adventure. This play-within-a-play captures a touring theatre troupe’s production of a melodrama titled Nothing On in three stages: dress rehearsal, the opening performance, and a performance towards the end of the show's debilitating run. Through this unique perspective, Frayn gives audiences a window into the inner workings of theatre behind the scenes, progressing from flubbed lines and missed cues in the dress rehearsal to mounting friction between cast members in the final performance. Brimming with slapstick comedy, Noises Off is a delightful backstage farce complete with slamming doors, falling trousers, and even flying sardines, and its three Broadway presentations to date have netted the play 10 Tony nominations, with co-tar Katie Finneran a 2002 winner for her role as loopy ingénue Brooke Ashton.

Noises Off will be staged in Augustana College's Brunner Theatre Center on October 17 through 20 with Thursday through Saturday performances at 7:30 p.m. and Sunday's performance at 1:30 p.m. Admission is $10-15, and more information and tickets are available by calling (309)794-7306 or visiting Augustana.edu.