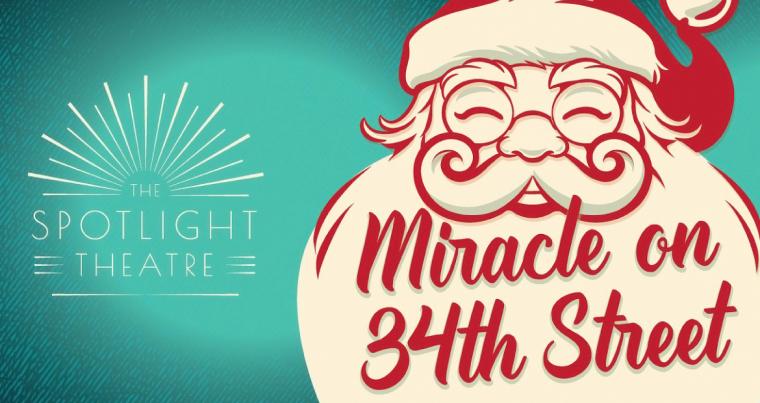 “Miracle on 34th Street: The Musical" at the Spotlight Theatre -- December 12 through 15.

Delivering what the Denver Post called “a sleighful of gifts” including “a minuet of the familiar and the special” and a “gentle, genial advocacy of the impossible,” the holiday spectacular Miracle on 34th Street: The Musical, running December 12 through 15, serves as the final production in the Spotlight Theatre's 2019 season, an adaptation of the beloved movie classic boasting music and lyrics by The Music Man creator Meredith Willson.

As in the iconic 1947 movie, the musical stage version of Miracle on 34th Street finds sensible single mother Doris Walker not wanting her six-year-old Susan's head filled with romantic notions. Such notions, however, are exactly what are on the mind of neighbor Fred Gailey as he tries to woo Doris by charming Susan and taking her to see Santa Claus at Macy's, the Manhattan department store in which Doris works. At first, practical-minded Doris is not impressed. But when she begins to think that this Macy's Santa may, in fact, be the real Kris Kringle, a wave of love spreads across New York City that begins to melt even the most cynical of hearts. Filled with humor, spectacle, and such beloved songs as “Pine Cones and Holly Berries,” “My State, My Kansas,” and the timeless seasonal tune “It's Beginning to Look a Lot Like Christmas,” this joyous, heartwarming musical is pure family entertainment by legendary composer and lyricist Willson, whose follow-up to The Music Man debuted on Broadway in the fall of 1963. The show finally closed after nearly a year and 334 performances, and continues to enchant audiences both new to its story and well-familiar with the film classic starring Natalie Wood, Maureen O'Hara, and the Oscar-winning Edmund Gwenn.

Miracle on 34th Street: The Musical runs at the Spotlight Theatre for five performances December 12 through 15, with performances at 7:30 p.m. Thursday through Saturday and 2 p.m. on Saturday and Sunday. Admission is $20, and more information and tickets are available by calling (309)912-7647 or visiting TheSpotlightTheatreQC.com.