The Mississippi Bend Players' “The Santaland Diaries,” December 12 through 15 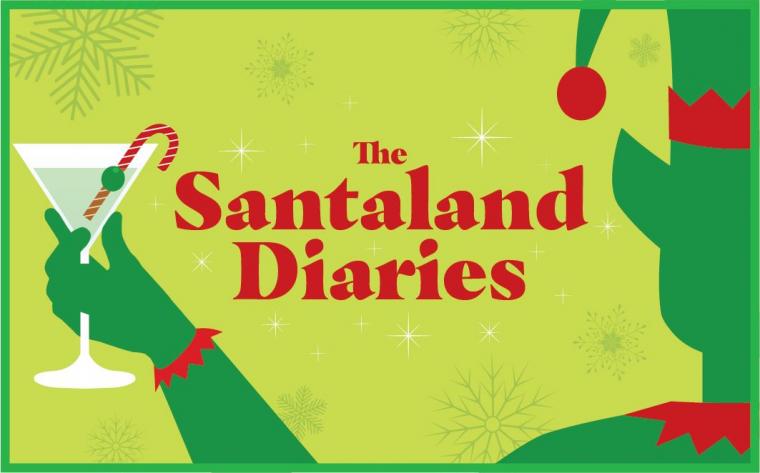 The Mississippi Bend Players' “The Santaland Diaries" at Augustana College -- December 12 through 15.

Described by the Chicago Reader as “a hilarious adult romp through the holiday season” and by the Chicago Tribune as “well-stocked with laughs and wry human commentary,” the stage version of David Sedaris' iconic The Santaland Diaries serves as the Mississippi Bend Players' first production outside its traditional summer seasons, the show's December 12 through 15 run at Augustana College sure to deliver what Broadway World deemed a “delightful and sometimes edgy holiday comedy extravaganza.”

In The Santaland Diaries, a down-on-his luck wannabe actor arrives in New York City at the end of the year with the only employment he can find at Macy’s department store – working in Santaland for the holiday season as a reluctant yet relentlessly cheerful elf. Newly christened “Crumpet,” our clever anti-hero consequently shares his observations of the mayhem in front of and behind the scenes during one chaotic December, from aggressive parents and drunken Santas to flirtatious actors, poor hygiene, and the racially charged hazards of being a “Pointer Elf.” Will Crumpet find a moment of pure Christmas spirit? Will he end up in Santa’s cottage with the adorable elf Snowball? And will he escape with his life on Christmas Eve before being torn apart by enraged customers?

Based on perhaps the most famous and beloved of author Sedaris' humorous autobiographical essays, The Santaland Diaries was adapted for the stage by Tony Award winner Joe Mantello and made its debut in 1996 with Timothy Olyphant in the role of Crumpet. A wry and witty look at one particular combination of retail hell and the theatrical spectacle of the holiday season, Mantello's sharp, hour-long comedy has emerged as the perfect Christmas treat for holiday-minded grown-ups – a one-man show that has been an annual tradition at theatres across the United States for the past 20-plus years.

Directing The Santaland Diaries for the Mississippi Bend Players is Augustana's assistant professor or theatre arts Jennifer Popple, whose previous presentations for the college have included The Crucible, Crimes of the Heart, and this past fall's slapstick farce Noises Off. And starring as Santaland's put-upon elf Crumpet is Augustana graduate Keenan Odenkirk, a Chicago resident who is an ensemble member of the Quicksilver Shakespeare Co. and the Valiant Theatre New Works Festival. Among Odenkirk's past productions for the Mississippi Bend Players are A Green River, The Glass Menagerie, Zombie Prom, and the world premiere of the comedy Beginner's Luck, and his credits include appearances as Bassanio and Gratiano in Invictus Theatre Co.’s The Merchant of Venice, as well as numerous characters in short films made at Columbia University, DePaul University, and Flashpoint College.

The Santaland Diaries will be staged in Augustana College's Brunner Theatre Center December 12 through 15, with performances at 7:30 p.m. Thursday through Saturday and 2 p.m. on Sunday. Admission is $20, and more information and tickets are available by calling (309)794-7306 or visiting MississippiBendPlayers.com.