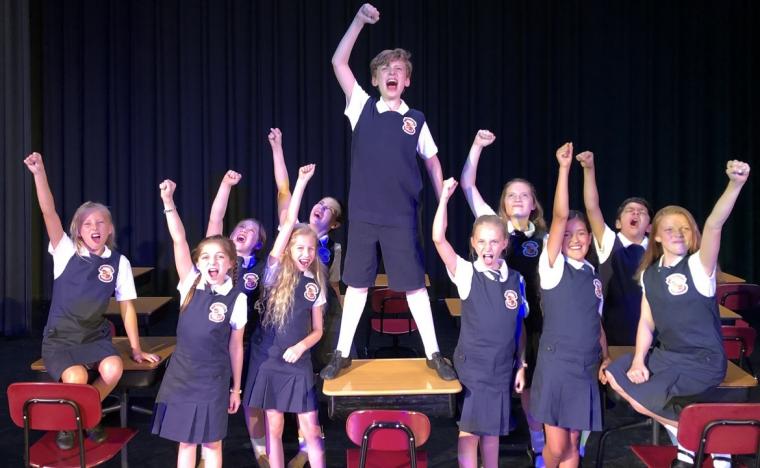 ensemble members in "Matilda: The Musical" at the Spotlight Theatre -- August 2 through 11.

Winner of five 2013 Tony Awards and the record-holder for the most Olivier Awards – the United Kingdom's equivalent of the Tony – ever won by a musical, the Broadway smash Matilda: The Musical makes its long-awaited area debut at Moline's Spotlight Theatre August 2 through 11, treating family audiences to a delightful entertainment for all ages, and a work the New York Times called “an exhilarating tale of empowerment” told with “astonishing slyness and grace.”

In the show, Matilda is a little girl with astonishing wit, intelligence, and psychokinetic powers who is unloved by her cruel parents but cherished by her endearing yet shy teacher Miss Honey. Over the course of her first term at school, Matilda and Miss Honey have a profound effect on each other's lives, as Miss Honey begins not only to recognize but also appreciate Matilda's extraordinary personality. Matilda's school life isn't completely smooth sailing, however – the school's mean headmistress, Miss Trunchbull, hates children and just loves thinking up new punishments for those who don't abide by her rules. But Matilda has courage and cleverness in equal amounts, and could prove to be her fellow pupils' saving grace. Inspired by the iconic children's book by Roald Dahl, the author of Charlie & the Chocolate Factory and James & the Giant Peach, the Tony-winning Matilda: The Musical is a captivating masterpiece that revels in the anarchy of childhood, the power of imagination, and the inspiring story of a girl who dreams of a better life. As stated in the Hollywood Reporter, “This funhouse fairy tale is by turns riotous and poignant, grotesque and menacing, its campy comic exaggeration equaled only by its transporting emotional power.”

Directing Matilda: The Musical is the Spotlight Theatre's co-owner Sara Tubbs, whose on-stage appearances at the venue include roles in this year's The Spitfire Grill, Big: The Musical, and A Gentleman's Guide to Love & Murder. Matilda is portrayed by young area performer Tate Sommer, while Miss Money is played by Olivia Lyman (the Black Box Theatre's Next to Normal) and the evil Miss Trunchbull by T.J. Green (the Playcrafters Barn Theatre's Avenue Q).

Matilda: The Musical runs at the Spotlight Theatre August 2 through 11, with performances at 7:30 p.m. on Fridays and Saturdays and 2 p.m. on Sundays. Admission is $20, and more information and tickets are available by calling (309)912-7647 or visiting TheSpotlightTheatreQC.com.