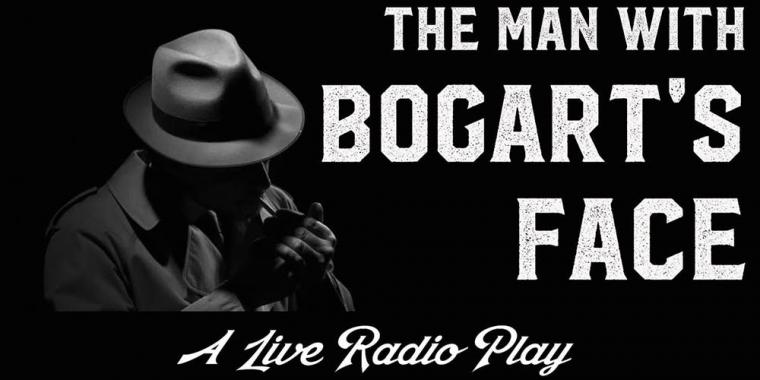 Described by Variety magazine as “a fast-moving story with action and staccato dialogue that literally bring Bogart to life,” author Andrew J. Fenady's The Man with Bogart's Face will be staged in radio-play format at Moline's Black Box Theatre October 11 through 19, the mystery-comedy praised by The Hollywood Reporter as “a loving tribute to the genre of hard-boiled detectives of the 1940s and the Hollywood movies that glorified their derring-do.”

Based on Fenady's Edgar Allan Poe Award-winning book and its subsequent 1980 film adaptation, The Man with Bogart's Face finds an amateur sleuth who calls himself Sam Marlowe having his features altered to resemble those of his idol Humphrey Bogart. With the facial surgery a success, Marlowe buys a trench coat and a big gun and opens a detective agency, and after hiring a breathless blond as his gal Friday, he sits behind his desk, pours himself a slug of rye, and waits for the clients to appear. And appear they do – bizarre ones, silly ones, and the deadliest ones somehow tied to the fate of a beautiful dame who happens to look just like Gene Tierney in Laura. A unique comedy noir presented in radio-play format, with the audience able to witness the presentation of sound effects as they're created live, The Man with Bogart's Face is both hilarious and suspenseful stage entertainment, resulting in a work in which, according to The Hollywood Reporter, “Fenady obviously has a strong affection for those tough private eyes and gorgeous women who both plagued and pursued them.”

Directing and designing The Man with Bogart's Face is the Black Box Theatre's co-founder and artistic director Lora Adams, whose additional directorial credits for the venue include the 2019 presentations of Silent Sky and Lady Day at Emerson's Bar & Grill. Three cast members from last fall's Black Box presentation of War of the Worlds: A Radio Play – James Driscoll, Mark Ruebling, and Scott Tunnicliff – return to radio-play duties for the venue's latest production. And joining them are fellow venue veterans Phillip Dunbridge (an actor in Sleuth) and Patti Flaherty (the director of It Had to Be You), plus a trio of gifted area performers making their Black Box debuts: Ashley Hanson, Lisa Kahn, and Susan Perrin-Sallak.

The Man with Bogart's Face runs at the Black Box Theatre October 11 through 19 with Thursday through Saturday performances at 7:30 p.m. and Sunday's show at 2 p.m. Admission is $16, and more information and tickets are available by calling (563)284-2350 or visiting TheBlackBoxTheatre.com.