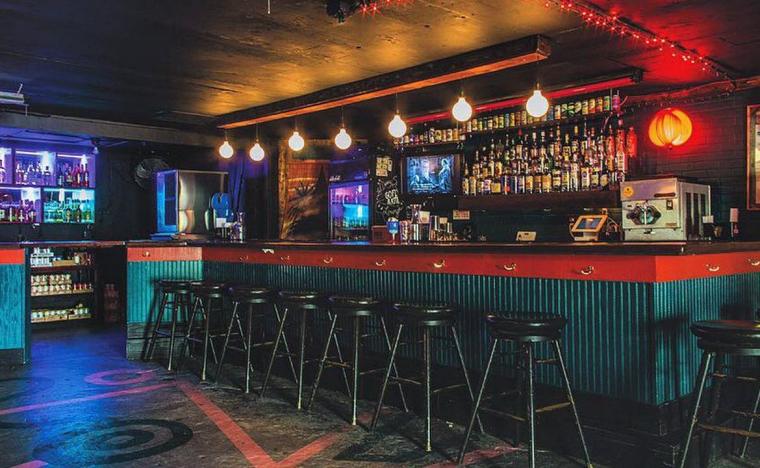 "Losers Bracket" at the Black Box Theatre -- November 15 through 24.

With the Chicago Reader deeming the work “a Preston Sturges comedy stranded at an I-94 truck stop” and “a wild, crotch-grabbing snapshot of life at the margins,” sibling authors Clay and Nate Sander's Losers Bracket makes its Quad Cities debut at Moline's Black Box Theatre November 15 through 24, its local run sure to demonstrate why the Chicago Tribune raved, “The play hums with the kind of quirky, blue-collar, sports-loving bravado that made Bleacher Bums a Chicago classic.”

In Losers Bracket, “Tiny” Willits and Ethan Banks spend most of their free time at Boo's Tavern in the working-class community of Downs Moor. The bar's co-owner is a know-it-all loudmouth named Gus “Hitch” Bigwood, a man with a noticeable limp due to a forklift accident that got him a massive settlement. Unbeknownst to Ethan and Tiny, however, Hitch has been faking his limp for the past decade to avoid paying back the insurance company, whereas Ethan and Tiny get laid off from their factory and are now desperate. To add insult to injury, Tiny has recently lost his girlfriend Trisha to the high-school principal Rick, and Ethan is being hounded by debt collectors.

Hitch, in the meantime, has grown weary of faking his limp, and along with the town's ineffectual sheriff Terry, the men hatch a scheme to "fake-steal" Hitch's antique automobile and collect the trumped-up insurance payoff. When Ethan and Tiny are tipped off to the caper, they join in, embarking on a “foolproof” plan that's anything but foolproof, and what results is a comedy the Chicago Sun-Times called “a beer lover's play … stocked with bad haircuts, Ditka accents, and a jukebox full of Dep Leppard's finest, making even the primmest teetotaler crave a cold brew.”

Directing Losers Bracket for the Black Box is Dave Bonde, who performs alongside the show's co-author Clay Sander in the area troupe Comedy Thingy, and who has directed such area presentations as A Doll's House, Part 2 for the QC Theatre Workshop, You Can't Take It with You for St. Ambrose University, and Glengarry Glen Ross for the Curtainbox Theatre Company. Black Box veterans Kelci Eaton (Baby), Emmalee Hilburn (Assassins), and Brant Peitersen (The Tin Woman) portray appear in the show's ensemble cast, and with Black Box co-founder Dave Miller serving as set designer, the Losers Bracket ensemble is completed by Kevin Keck, Mark Kulhavy, Mike Richards, and Tony Trulson.

Losers Bracket runs November 15 through 24 with performances at 7:30 p.m. on Friday and Saturday and 2 p.m. on Sunday. Admission is $13-16, and more information and tickets are available by calling (563)284-2350 or visiting TheBlackBoxTheatre.com.