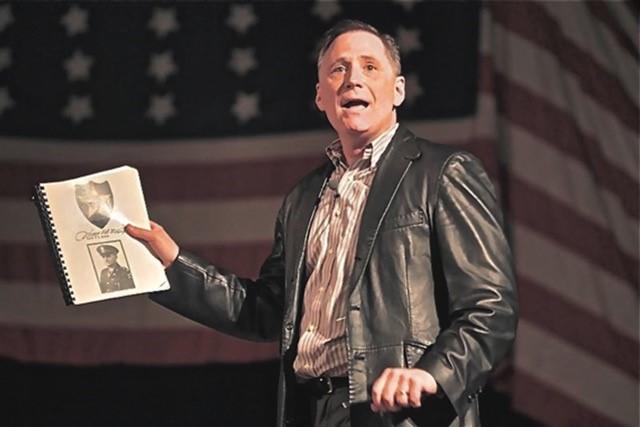 A lauded performer and playwright serves as the latest guest in the University of Dubuque's Live(stream) with Heritage Center series, with the virtual December 17 program boasting an interview with Patrick Dewane, who will also performs scenes from his forthcoming, holiday-themed sequel to his critically acclaimed one-man muli-media show The Accidental Hero.

In this true story of how DeWane's grandfather Matt Konop liberated the Czech villages of his grandparents, author Dewane – who also toured as the play's solo performer – brought archival material to life as an enthralling, humorous, and heartwarming tale of miraculous escapes and astonishing coincidences. When Konop returned from the war, he refused to talk about his service. Yet when he died, as Dewane shared, his basement yielded a treasure trove of typewritten accounts, photos, and rare film footage. The Accidental Hero consequently found Dewane assuming a dozen different roles as he recounted Konop's journey from Omaha Beach, the Battle of the Bulge, and the end of World War II, at which point the soldier discovered his lost identity and was embraced by family he never previously knew.

In the years since its 2010 debut, The Accidental Hero has been performed in more than 100 venues across the United States, including the New York Czech Center, The National WWII Museum in New Orleans, the George H.W. Bush Museum & Library in College Station, Texas, and the University of Notre Dame, and Minneapolis, MN. Since 2012, Dewane has also made annual visits to the Czech Republic in the first week of May, performing the play with Czech subtitles throughout Prague, Pilsen, Domazlice, Klatovy, and Klenci. The Smithsonian Institute's Daniel Freeman wrote: “Difficult to categorize, but impossible to forget – those are the best words I can find to sum up my reaction to a recent production of Patrick Dewane’s one-man show The Accidental Hero. Whether thought of as a monologue, docudrama, reminiscence – or some other creative designation that does not come readily to mind – its unique mix of narration with multi-media enhancements has more to offer prospective audience members than any could anticipate.”

With Dewane's sequel to The Accidental Hero, three true stories come to life in a heartwarming story of light appearing from darkness. One soldier finds pure Christmas peace in the middle of a battlefield. Another dresses as Santa Claus and, 30 years later, is a hero in Europe for it. Meanwhile, in Minnesota, a furry green cartoon character finds magic in a Mayo Clinic hospital visit. Dewane states that “the show illuminates the strange and wonderful things that happen out on the road when you’re away from home, including during Christmas..”

Live(stream) with Heritage Center: Patrick Dewane will be viewable through @UDBQMedia on YouTube, with the presentation starting at 7:30 p.m. on December 17. The event is free, though donations are greatly appreciated, and more information is available by calling (563)589-3432 or visiting Dbq.edu/HeritageCenter.