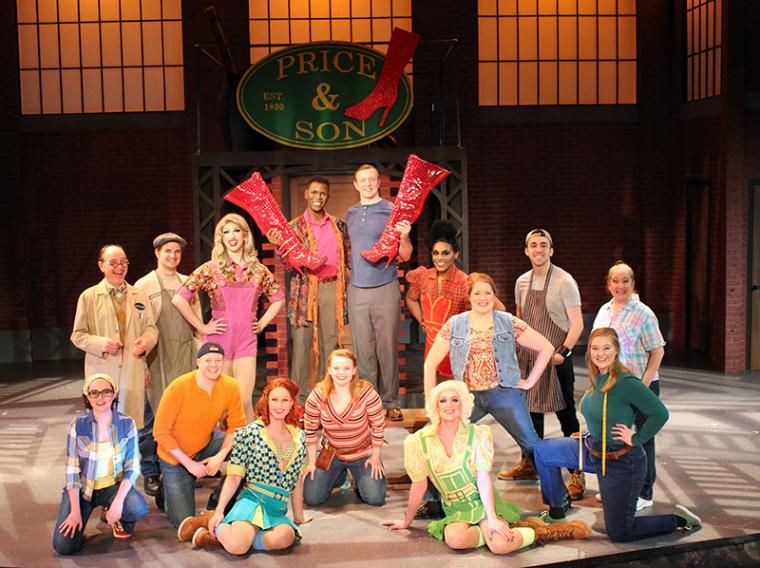 Kinky Boots at the Circa '21 Dinner Playhouse -- January 15 through March 14.

Winner of six 2013 Tony Awards including Best Musical and Best Score for pop icon Cyndi Lauper, the high-kicking musical Kinky Boots enjoys its first long-running area engagement at Rock Island's Circa '21 Dinner Playhouse January 15 through March 14, the show called “cause for celebration” by Entertainment Weekly and, according to Time Out New York, “the very model of a modern major musical.”

Based on true events and the 2005 film that earned a Golden Globe nomination for star Chiwetel Ejiofor, the bighearted Kinky Boots tells the tale of two people with nothing in common – or so they think. As the show begins, Charlie Price has reluctantly inherited his father's shoe factory, which is on the verge of bankruptcy. Trying to live up to his father's legacy and save his family business, Charlie eventually finds inspiration in the form of drag-queen headliner Lola. A fabulous entertainer in need of some sturdy stilettos, Lola turns out to be the one person who can help Charlie become the man that he's meant to be, and as they work to turn the factory around, this unlikely pair find that they have more in common than they ever dreamed possible.

Filled with elaborate costumes, exhilarating choreography, and a moving story with a book by multiple Tony winner Harvey Fierstein, Kinky Boots debuted on Broadway in April of 2013 and immediately charmed both audiences and critics, with the New York Times calling it an “inspired” musical entertainment “about finding your passion, overcoming prejudice, and transcending stereotypes.” With Lauper providing a score boasting 16 new compositions, the production earned a season-high 13 Tony nominations that resulted in six wins, with Lauper's victory marking the first time a woman won solo in her Best Score category. Kinky Boots' Broadway soundtrack, meanwhile, premiered at number one on the Billboard Cast Albums Chart and number 51 on the Billboard 200 – making it the highest-charting cast recording since The Book of Mormon – and went on to win the Grammy Award for Best Musical Theater Album.

Directing Kinky Boots is Circa '21 veteran and national guest artist Seth Reines, who previously helmed the theatre's fall production of Singin' in the Rain, and whose recent productions across the country have included Chicago for Florida's Broadway Palm Dinner Theatre and Aida for Arizona's Hale Centre Theatre. Making his Circa '21 debut, professional performer Malik Harris portrays Lola, while Charlie Price is portrayed by venue veteran Michael Penick, a castmate in such recent productions as Newsies: The Musical, Grumpy Old Men: The Musical, and Singin' in the Rain. Additional Circa '21 favorites such as Brittany Church, Noel Jean Huntley, Megan Opalisnki, Savannah Strandin, Tristan Tapscott, and Tom and Shelley Walljasper are also featured, with the rest of the Kinky Boots ensemble composed of Sean Jaenick, Kevin Korczynski, Weston Lundy, Bobby MacDonell, Mitchell Matyas, Cory Shorter, and Jacob Tarconish.

In addition to its preview performances on January 15 and 16, Kinky Boots will be performed January 17 through March 14 with performances on Fridays, Saturdays, and Wednesdays at 7:45 p.m.; Sundays at 5:45 p.m.; and Wednesday afternoons at 1:30 p.m. All shows will be preceded by meals and pre-show entertainment by the theatre's performing wait staff of Circa '21 Bootleggers, and more information and tickets are available by calling (309)786-7733 extension 2 or visiting Circa21.com.