“Invisible but Dangerous,” December 6 and 7 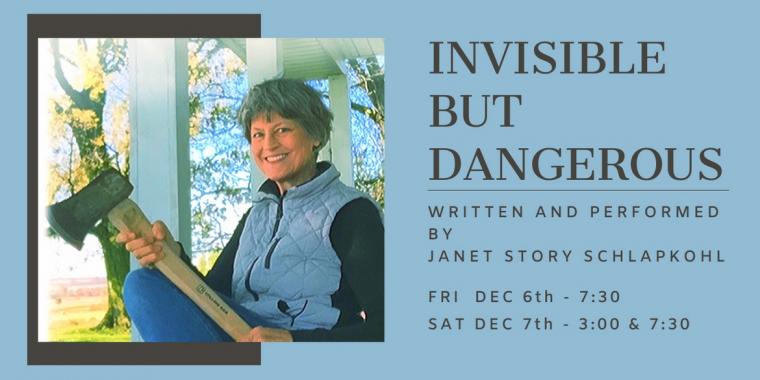 "Invisible but Dangerous" at the QC Theatre Workshop -- December 6 and 7.

A hilarious, cheeky, and thoughtful one-woman show making its Quad Cities debut, Iowa City playwright/actor Janet Story Schlapkohl's Invisible but Dangerous enjoys a special limited run at Davenport's QC Theatre Workshop December 6 and 7, treating audience to fraught, funny tales of everything from Midwestern politeness to mansplaining to those containers of spices that stay in your kitchen, unused, for decades.

Describing the content for her solo performance piece, Schlapkohl says, “The show is an irreverent but humorous look back at life from a small-town Iowa perspective” featuring reminiscences on “everything from La Leche to the Latch, from Lamaze to Epidurals, from land-lines to cell phones, from hands-on learning to 'apps.' From the evening news with Walter Cronkite to Fake news, from distrusting strangers to taking Ubers and staying at airbnbs – and all while being sandwiched between caring for Depression-era parents and parenting millennials” She adds, “I take swipes at Boomers (yup, I am one) along the way, and upend the options for older women becoming invisible – or becoming a 'Crone.'” From the embarassment of phones going off in theatre venues to the gradual acceptance of AMS – an acronym Schlapkohl coined meaning “Acculumalted Mistake Syndrome” – Invisible but Dangerous is sure to evoke both laughter and many silent nods of recognition.

A playwright, comedian, actress, director, and professor, Schlapkohl earned a BS in Biology from Iowa State University, an MS in Education from the University of Iowa, and an MFA in Playwrighting also from UI, where she is currently an adjunct professor. She has been the recipient of the Theatre Master’s Award, Visionary Playwright’s Award, the Isabelle Turner Human Rights Award, the Richard Maibaum Award, and the Human Rights Graduate Student Award, and also received commissions from the University of Iowa Labor Center, Iowa Women’s Archives, and University of Iowa Center for Human Rights. Her play My Sister, staged at the QC Theatre Workshop in 2014, was featured in the Los Angeles Times, Huffington Post, and Israeli Times, and in 2001, Schlapkohl founded Combined Efforts Theatre, a non-profit organization purposefully inclusive of actors with disabilities. In 1999, she also founded a children’s summer camp based on theatrical principles and focused on nature, and other recent works include the one-woman Chore Boots – staged at Iowa City's Riverside Theatre in 2015 – and a new adaptation of Shakespeare's A Midsummer Night's Dream.

Invisible but Dangerous will be staged on December 6 and 7 with performances at 7:30 p.m. on Friday and 3 & 7:30 p.m. on Saturday. Admission is “pay what it's worth” ticket pricing, and more information and reservations are available by calling (563)823-8893 or visiting QCTheatreWorkshop.org.