Holiday Cheer: “Elf: The Musical,” at the Circa '21 Dinner Playhouse through December 29 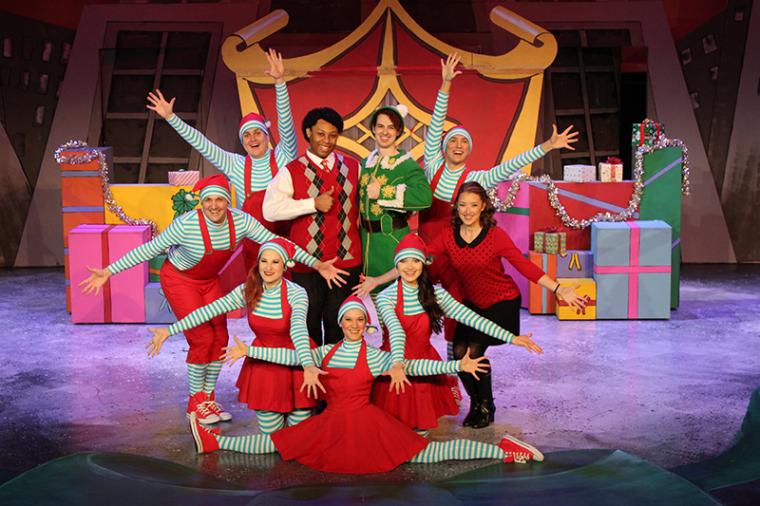 cast members in Elf: The Musical

I attended the Wednesday preview performance of the Circa '21 Dinner Playhouse's Elf: The Musical, and director Jeremy Littlejohn and musical director Travis Smith have clearly concocted a sweet, fluffy treat. The songs may be standard fare, but they're given freshness by the performers, as well as the beautiful costuming by Greg Hiatt.

Elf: The Musical's lyrics are by Chad Beguelin, with music by Matthew Sklar and a book by Thomas Meehan, and the show was adapted from the 2003 hit film starring Will Ferrell. In stage adaptations, scenes (and characters) are usually combined or removed – generally for time, clarity, and/or to condense the cast (thus saving on salaries) – and one key scene here that would have been problematic to stage was cleverly transformed with the reckless use of a paper shredder, a running gag nicely set up earlier. This scene consequently took a different path than the movie's did, but ended at the same plot point. (Well done, Meehan.) Anyway, if you're a fan of the film, you'll experience at least some of your favorite lines and scenes in its musical equivalent.

Stephen James Potter, as Buddy the human elf, is a tall drink of cocoa, as excitable and bouncy (most of the time) as you'd expect. Since everyone is familiar with Ferrell in this role, Potter has some big curly-toed shoes to fill, and he slips into them and makes the part his. Potter's extensive regional-theatre credits include several children's shows, and he clearly knows how to perform for young audiences. 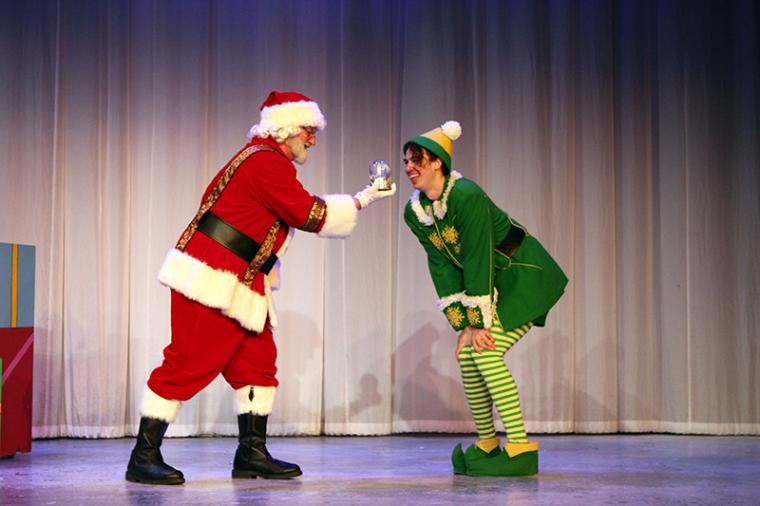 At the beginning of Circa '21's latest, Jovie (Brooke Myers) is as cold as an icicle, and almost as hard. Buddy's enthusiasm, however, eventually warms her, as it does the audience. Myers shines as genuine throughout, and I personally felt for her, knowing what it's like to care about someone who is extraordinarily odd. Jovie faces a rocky road as she struggles with doubt and conflicting feelings.

Tom Walljasper cranks up the cranky as Walter, the executive who pushes his family away, including the elf son he just found out about. Walljasper (who also played Walter when Circa '21 presented Elf in 2017) made me sympathize with the guy – a job can take a lot out of you – in addition to making me want to boo him. I didn't, though. It's not that kind of show.

Erin Churchill, also reprising her 2017 role, makes Walter's wife Emily lovable. Walter may bring home the dough, but it's Emily who bakes the cookies and keeps the family together. Like many moms, Emily is stretched thin but manages to keep up a cheery front, and Churchill and Julian Anderson, playing son Michael, really sparkle together in two wonderful duets. Anderson, who played an elf in the 2017 production and now has an adult-sized voice, is big here, but not too broad, always coming through as sincere. (Brennan Hampton, who alternates performance dates as Michael, is reprising his 2017 role.)

All of Elf 's youngsters impressed me, with every member of the ensemble superb regardless of age. Numbering around 14, these performers portray various characters throughout the show while handling a flurry of costume changes. That's some hard work. 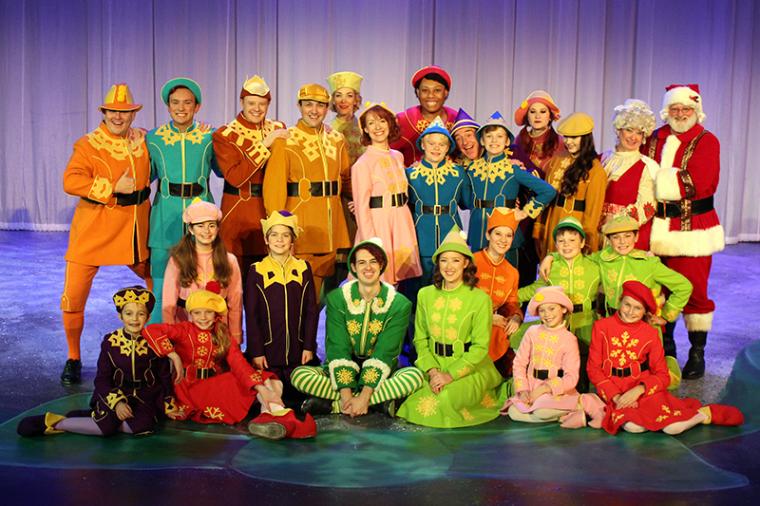 Among the show's musical numbers, "Nobody Cares About Santa," performed by a bevy of tired, jaded department-store Santas, is a highlight. And speaking of Santa, Janos Horvath is Santa. By which I mean he's so true-to-life that he might actually be the real Santa. (I'll be sending my list to Horvath.) Sarah Hayes, as Deb from Walter's office, shares some fun, convivial moments with Buddy, with the office numbers, in general, especially jolly. And the whole cast, all boasting powerhouse voices, pulled off "singing loud for all to hear," with the excellent dancing (hat tip to choreographer Sarah Philabaum) a bigger part of the show than I'd anticipated. (The big finale is a jaw-dropper.)

While I had no problem suspending disbelief about a human raised as an elf, a flying sleigh, and the like, the script's portrayal of the book-publishing process was way off, though I was probably the only one on Wednesday who laughed at the inaccuracies. (I do realize musicals are not documentaries.) Occasionally, too, some actors spoke so quickly that they were unintelligible, but that's certainly a fixable problem.

Kids will delight in Elf: The Musical, but actually, this would be a great first musical-theatre experience for patrons of any age. (Buddy doesn't get schnockered in this version – a welcome omission by my lights, as drunk scenes are generally a lazy writer's way to cheap laughs – and the film's physical altercations were also cut, with the sexual innuendos whittled down to two quick euphemized remarks.)

I suggest you make reservations soon for the festive frolic of Circa '21's Elf: The Musical. Buddy and Santa have come to town, but they can't stay forever.

Elf: The Musical runs at the Circa '21 Dinner Playhouse (1828 Third Avenue, Rock Island) through December 29, and more information and tickets are available by calling (309)786-7733 extension 2 or visiting Circa21.com.