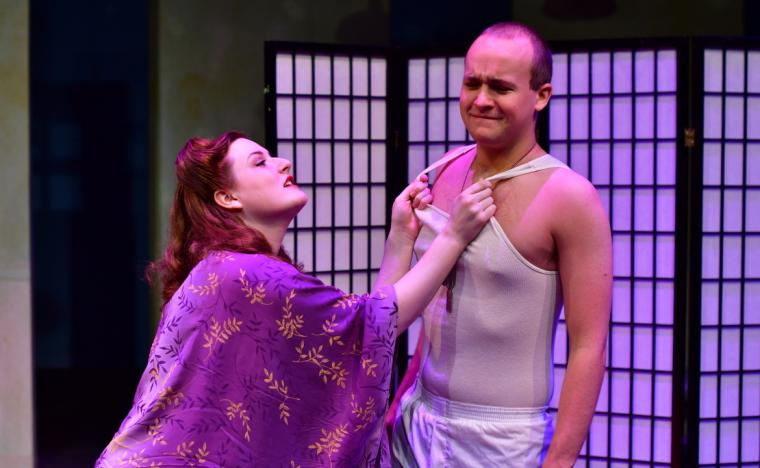 The Mississippi Bend Players' third season opened on Friday with Neil Simon's Biloxi Blues, a tribute to our military veterans and all the brave men and women who currently serve this great country. This second installment in Simon's semi-autobiographical comedic trilogy – one that begins with Brighton Beach Memoirs and concludes with Broadway Bound – had me rifling through my purse to find a tissue to dry my eyes, given that they were watering so much from laughter. Director and St. Ambrose University theatre professor Cory Johnson, who also gave us MBP's Brighton Beach in 2017, delivered a hilarious show that was not only extremely funny, but touched on some very serious subject matter.

Simon's comedy is narrated by aspiring Brooklyn writer Eugene Morris Jerome (Tristan Odenkirk), with Augustana College's Brunner Theatre brilliantly transformed into the barracks of a diverse mix of young soldiers who are completing 10 weeks of basic training while surviving the rigorously sadistic drill sergeant Merwin J. Toomey. The role is played by the company's producing artistic director (and Reader employee) Mike Schulz, and from the moment he stepped on the stage, Schulz had the audience in stitches. Laughter could be heard erupting throughout the auditorium as he delivered one of the best performances I've ever seen him give.

It's 1943, and in the opening scene we find our young World War II recruits aboard a train headed to Biloxi, Mississippi, for boot camp and a trip that would forever change their lives. I found the versatile set design by Susan Holgersson quite creative, with solid metal bed frames doubling as train seats and cots for the barracks. Holgersson's set is unusually fascinating and abstract, with another metal frame used as a door that separated two rooms, and, in the set's center, a wooden door that was slammed quite often with fantastic melodramatic precision. 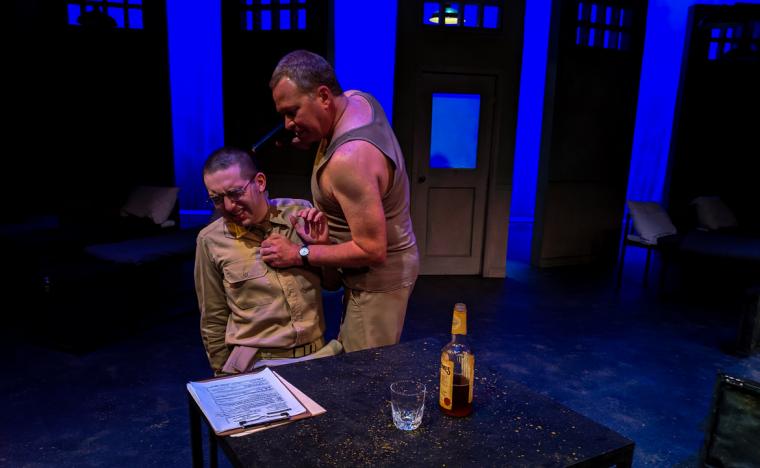 The lighting design by RaeEllen Walker is superb, with lamps that hang down from the ceiling and a scattered spotlight reflecting on the floor that appeared to take on a camouflage pattern. And the sound design by Calvin Vo was exquisite, echoing with the distant sounds of chirping crickets and the chugging of a train engine traveling down the tracks.

As for the incredible male actors in Biloxi Blues, each one of them has his own unique East Coast accent – aside from Schulz, who spoke in a phenomenal southern drawl that accented the craziness of his character. Meanwhile, Odenkirk's voice sounded a lot like Billy Crystal's Mike Wazowski from Monsters Inc., and the actor did an excellent job engaging the audience as Eugene unfolds Biloxi's story from his memoirs. (The voice just made Odenkirk's role even more fun for me.)

Eugene's fellow recruit Arnold Epstein has the kind of smarts and personality that continually get under Toomey's skin, and actor Tyler Hughes' overall stage presence and persona were a great fit for his nervously weird part, making him very believable. Joseph Wykowski is the alpha male of the platoon, with Cole McFarren seamlessly falling into this character with finesse and exuberant toughness, while Private Don Carney was more in touch with his softer side, singing and dancing as a wannabe music sensation. Max Moline was perfect for this role. 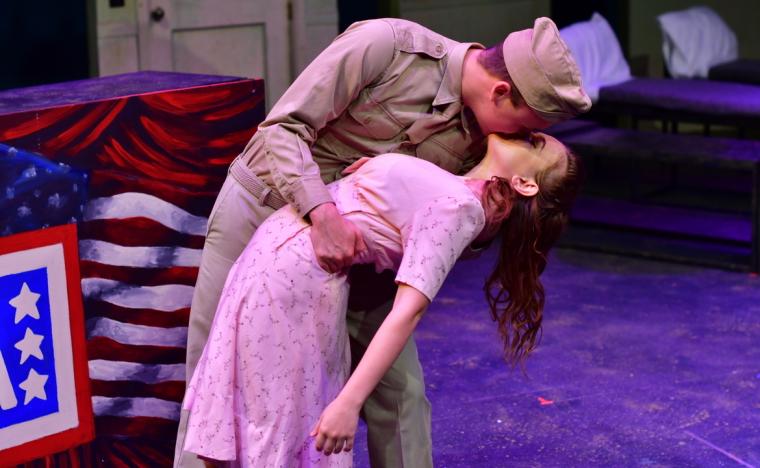 Roy Selridge seemed like the kind of easygoing recruit that has a great sense of humor, and the way Jordan Webster-Moore employed a little smirk on his face the majority of the time made his character very loveable, yet mischievous at the same time. James Hennesey (Jacob Pecaut) was a soft-spoken soldier who seemed to be looking out for the rest of the guys, but his character was initially hard to figure out – until a very poignant scene in which Pecaut showed off some serious acting chops that brought out raw emotion and really impressed me. And rounding out the cast were Sarah Goodall's Rowena, a local prostitute who schools the soldiers in the ways of pleasure, and Amy Nicholson's Daisy Hannigan, a young Catholic woman whom the Jewish Eugene meets, and falls in love with, at a USO dance. Both actresses complemented Johnson's production by adding feminine flair and unique personalities to their characters.

Although I did laugh hysterically during Biloxi Blues, I also found myself more aware of what new recruits go through in order to be trained for the somber matter of war, and just how much they sacrifice to provide us with freedom. The Mississippi Bend Players provided an opportunity to both laugh and cry – and feel a multitude of other emotions – while also enjoying a high-quality theatrical production. Very well done, MBP.

Biloxi Blues runs at Augustana College's Brunner Theatre Center (3750 Seventh Avenue, Rock Island) through June 23, with discounted $10 admission for all active, reserve, and veteran members of the military and their families. For more information and tickets, call (309)794-7306 or visit MississippiBendPlayers.com.