“The Goat, or Who Is Sylvia?”, October 25 through November 3 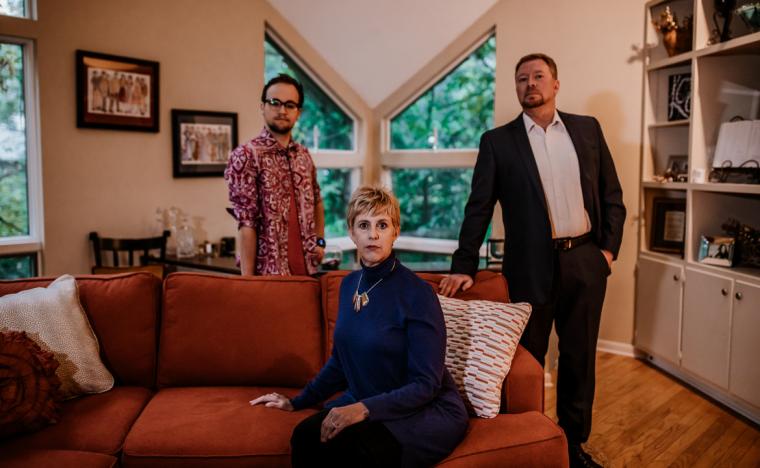 Tristan Odenkirk, Corinne Johnson, and Mike Schulz in "The Goat, or Who Is Sylvia?" at the QC Theatre Workshop -- October 25 through November 3. (photo by Shared Light Photography)

Winner of the Tony Award for Best Play and a finalist for the Pulitzer Prize for Drama, Edward Albee's dark comedy The Goat, or Who Is Sylvia? makes its Quad Cities debut in a October 25 through November 3 presentation at Davenport's QC Theatre Workshop, the New York Post calling the playwright's startling and hilarious meditation on love “as challenging, and as outrageously funny, as theatre gets.”

A Broadway hit from the legendary author of Who's Afraid of Virginia Woolf?, Albee's The Goat, or Who Is Sylvia? concerns Martin Gray, a middle-aged architect at the peak of his fame whose life is thrown into turmoil when he reveals to his best friend Ross that he is in love, spiritually and physically, with a goat named Sylvia. The shocking revelation consequently leaves the Grays' perfect family life in ruins as his wife Stevie and their 17-year-old son Billy struggle to understand Martin's former secret and come to terms with the man's actions. Can there be any return from this improbable, bestial love affair? With linguistic precision and fierce timing, Albee takes an unflinching look at the limits liberal society can be pushed to, and forces the audience to question their own beliefs and examine matters traditionally considered socially taboo. Described by the Seattle Times as “the edgiest, most fervently debated Broadway play of 2002,” The Goat inspired the Houston Chronicle to deem it “as fine a piece of theatrical art as any Edward Albee has created – and perhaps the boldest of them all.” 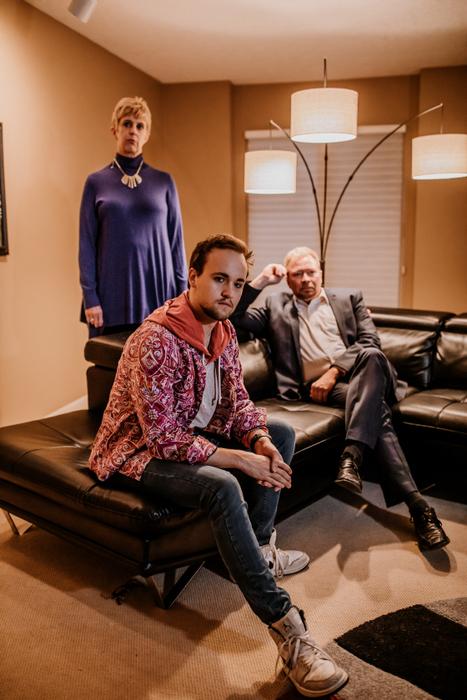 Making her directorial debut with the QC Theatre Workshop is Cait Bodenbender, a co-founder of area theatre troupe the Prenzie Players whose credits include directing the company's 2019 Macbeth and performing in Lear and Much Ado About Nothing, as well as playing Gertrude in Genesius Guild's summer presentation of Hamlet. Martin is played by Workshop veteran and Reader employee Mike Schulz, a castmate in the venue's A Doll's House, Part 2 and Dead Man's Cell Phone, while Billy is played by Tristan Odenkirk, an Augustana College senior who co-starred in the Workshop's recent Gruesome Playground Injuries; the actors also performed opposite one another in the Mississippi Bend Players' Biloxi Blues and Brighton Beach Memoirs. The director of those productions, St. Ambrose University theatre professor Corinne Johnson, makes her Workshop debut as The Goat's Stevie, her stage credits including directing St. Ambrose's Tartuffe and Cabaret and starring in the Curtainbox Theatre Company's Wit. And completing the cast is another first-time Workshop participant: Tracy Skaggs, a longtime member of the Prenzie Players and ComedySportz Quad Cities veteran who has enjoyed roles in such Shakespeare classics as As You Like It and Coriolanus and directed the Prenzies' Caesar.

The Goat, or Who Is Sylvia? will be staged October 25 through November 3 with performances at 7:30 p.m. on Thursday, Friday, and Saturday and 3 p.m. on Saturday and Sunday. Admission is “Pay What It's Worth” ticket pricing, and more information and reservations are available by calling (563)823-8893 or visiting QCTheatreWorkshop.org.