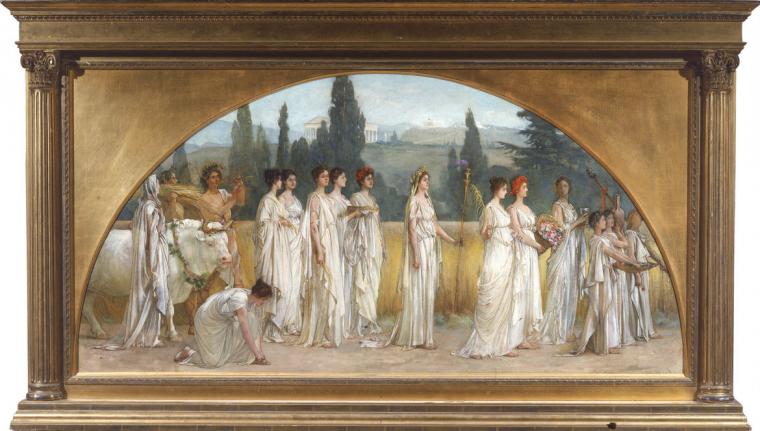 One of the most political of ancient-Greek comedies – and, in adapter Don Wooten's hands, one of the most nuttily satisfying – serves as Genesius Guild's traditional season-ending slapstick when the company presents Ecclesiazusae from July 27 through August 4, Aristophanes' one-act farce delivering laughs, commentary, and a madcap, Mack Sennett chase around Rock Island's Lincoln Park stage.

In Ecclesiazusae (also known by the title The Assemblywomen), a group of women led by the wise and redoubtable Praxagora has decided that the females of Athens must convince the men to give them control of the city, as they are convinced they can do a better job. Disguised as men, the women sneak into the assembly and command the majority of votes needed to carry their series of revolutionary proposals, even convincing some of the men to vote for it on the grounds that it is the only thing they have not yet tried. Once in power, however, Praxagora realizes that she has to come up with some novel and radical proposals. She and the other women consequently institute a communist-like government in which the state feeds, houses and generally takes care of every Athenian – a plan that winds up having serious, and hilarious, consequences for everyone in the Greek city.

What follows in this modernized adaptation of Ecclesiazusae is a rowdy and roaring burlesque of political themes, pop-culture (and area-culture) references, verbal comedy, physical slapstick, and even a song or a few, with Aristophanes' text from 390 B.C. cheekily updated by Genesius Guild founder Don Wooten. When the classical-theatre troupe last staged the play in 2010, the River Cities' Reader's Thom White wrote, “The show is certainly silly, but it's also witty and jovial, the entire production playing like a celebration after a summer of hard, serious work.”

Genesius Guild's Ecclesiazusae will be performed in Lincoln Park on Saturdays at Sundays at 8 p.m., and admission to the July 27 through August 4 run is free, though donations are encouraged. For more information, visit Genesius.org.