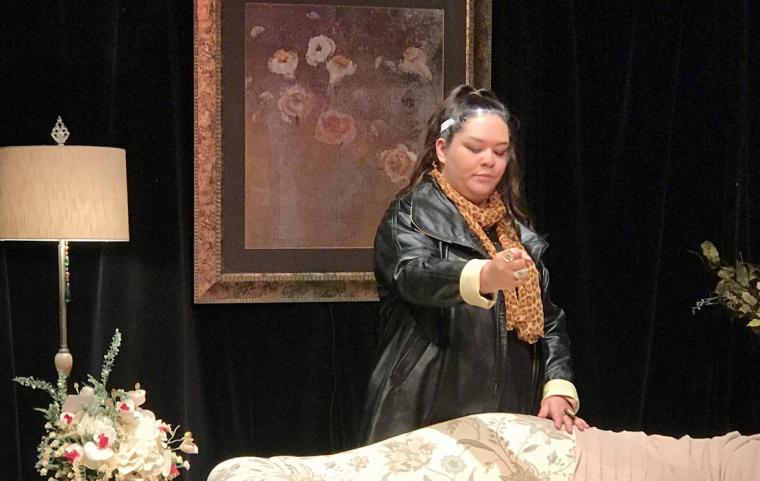 Family. Love. Money. Major occupiers of our time; continual goals and sources of both stress and joy. We want them and work for them, or in spite of them. They facilitate our dreams, or get in their way. We race toward our desires until Death, who always wins, tells us we're done.

The monologues in Jeffrey Hatcher's Three Viewings, now playing at the Black Box Theatre, are about struggles with one or more of the Big Three. The eternal constant is Death – so, fittingly, the play's three characters tell us their separate stories in the same funeral parlor. Though Death is the common denominator here, and there are some unsettling moments, there is plenty of levity throughout.

Lora Adams, the theatre's co-founder and artistic director, helmed this production admirably. She also designed the pleasing set, which, although it definitely has a funereal vibe, is more attractive than any mortuary I've seen. (She also inhabits that set, which I'll get to later.) Michael Kopriva constructed the set, and theatre co-founder David M. Miller took control of the light board.

Three Viewings premiered in 1994, and Hatcher also wrote the scripts for the Black Box Theatre's July production The Turn of the Screw and the theatre's inaugural play Murderers (a work also composed of three monologues). I've had the good fortune to see all these productions, and agree with Adams, who said in her opening-night pre-show remarks that Hatcher "has been very good for us."

James Driscoll kicks off the evening, in the monologue titled “Tell-Tale,” as Emil, the funeral home's director. He's in love, but the object of his affection doesn't know. Driscoll imbues Emil with endearingly childlike innocence, adolescent ardor, and a smidge of adult cynicism. If not for his sophisticated-sounding mid-Atlantic accent (think Frasier Crane), Emil might have come off as too simple a man to be able to manage a business. However, in Driscoll's portrayal, he is lively and engaging, clearly a competent, even debonaire adult – but a yearning one, with a passion he fears he can't express to his crush. He details Emil's increasingly daring yet subtle gambits with a sweet mixture of shyness, hope, and pride. I felt his delight and dismay as he scrutinized her every word and action for a clue about how she felt, and Driscoll matches his wonderful vocal expression with precise gestures and understated touches – quick glances and changes in stance – that make Emil a distinctive, real presence. 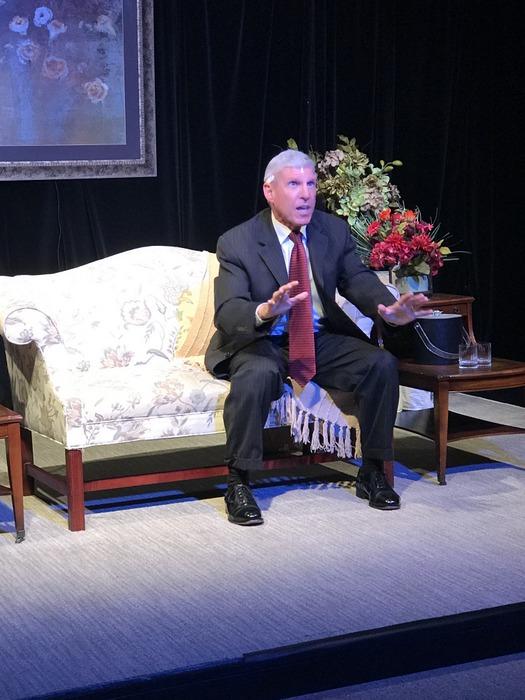 Kayla Jo Pulliam portrays Mac in “The Thief of Tears,” and I was happy to get another dose of the performer so soon – she was marvelous on the Black Box stage in The Turn of the Screw. Mac is a vagabond wild child, as well as the family's "black sheep" (as many wild children are so branded by their relatives). Sporting a black leather jacket and gaudy jewelry, she's not only a morning drinker, but also frequents the notorious, celebrity-haunted Viper Room at night. Mac has entertaining things to say, but Pulliam doesn't play her as a caricature. There's a genuine soul there, as Mac hides pain behind all that bluster.

Pulliam gives Mac a wonderful flair for mimicry – as she recounts her adventures, she briefly becomes other people in her life, as well as laying bare her own various personae (as we all show different faces to the world). When revealing her heartbreak, she almost cries, but doesn't flat-out bawl – which proves more effective than floods of tears would've been.

If the phrase “she's good in anything” hadn't already existed, Adams, who assumes the role of Virginia in “Thirteen Things About Ed Carpolotti,” would have inspired it. Virginia is filled with sorrow, but is also in crisis, as she is responsible for her late husband's substantial debts. She has no means to settle any of them, and none of the lenders are patient people.

Virginia is the oldest of Three Viewings' characters, and Adams projects that aura impeccably. Sitting, clutching her purse, speaking calmly, Adams gives her the exact right posture and tone of voice to convince us. (With the audience so close to the actors, age makeup wouldn't have worked.) Adams doesn't even have gray hair to aid in her portrayal – she wears a first-rate auburn wig. (I wouldn't even have known it was one had I not seen Adams herself at the top of the show.) Virginia is loveable, and Adams exhibits her grief and fear plainly, yet so subtly that we still see the upbeat person she is at her core.

Though the actors wear transparent face shields, everyone's faces and voices are clear. Patrons must wear masks, and temperature is checked quickly at the door via wrist. Seating is reduced, and the theatre urges reservations and advance no-touch payment. The show is just short of 90 minutes, with no intermission. And I found Three Viewings both entertaining and uplifting – with just a shade of creepiness. But we are talking about Death here.

Three Viewings runs at the Black Box Theatre (1623 Fifth Avenue, Moline) through October 3, and more information and tickets are available by calling (563)284-2350 or visiting TheBlackBoxTheatre.com.