Deemed “a stylish and funny whodunit” by the Chicago Tribune, the gumshoe slapstick Flemming: An American Thriller serves as the latest student-directed production in Augustana College's 2019-20 theatre season, with the play described by SDGLN.com as a “clever homage to film noir” that's “guaranteed to make you laugh.”

In Flemming: An American Thriller, title character Henry Flemming is finding himself bored by his privileged but mundane life. On a whim, Henry decides to sell his lucrative brokerage firm in order to become a private detective. And with his very first case – and to the horror of his wife Karen and crazy neighbors Suzy and Stan – the Flemming living room begins to pile up with dead bodies, one of them turning out to be Karen's father. Yet even though Henry keeps showing up at home every day more disheveled and beaten up, the man couldn't be happier. Henry is convinced that he has finally found his life's goal, and Westport, Connecticut, is all the safer for it. A delirious comedy peppered with suspense, Flemming: An American Thriller was written by Sam Bobrick, a Mystery Writers of America Award winner for his play The Psychic who is also credited as the creator of the iconic TV series Saved by the Bell. 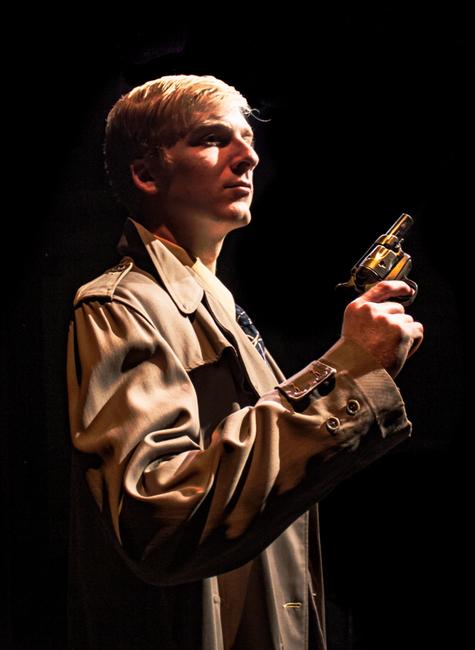 Augustana senior Maddie McCobb directs the production, her additional area credits including appearances in the college's The Crucible and Circle Mirror Transformation and New Ground Theatre's Elephant's Graveyard. Regarding her helming of Flemming, McCobb says, “My friends and I were browsing the Samuel French Store and one of them handed me this play and said, 'I think this was written for you.' I then bought it, read it, and then knew that I had to direct it. Flemming has been the best learning experience. It has given me the opportunity to grow as not only a director but also as a person, and I will be forever grateful.” Henry Flemming is portrayed by fellow Augustana student Jack Harris, previously featured in Circle Mirror Transformation and The Madwoman of Chaillot. And with Cass Karn serving as stage manager, the rest of the Flemming ensemble is composed of Scott Brick, Becca Casad, Sarah Elrod, Arturo Perez, Jonathan Quigley, Collin Schopp, and Olivia Smith.

Flemming: An American Thriller runs October 31 through November 3 at Augustana College's Heidi Honkamp Myhre Black Box Theatre in the Brunner Theatre Center, admission to the 7:30 p.m. performances is $5-10, and more information and tickets are available by calling (309)794-7306 or visiting Augustana.edu/tickets.