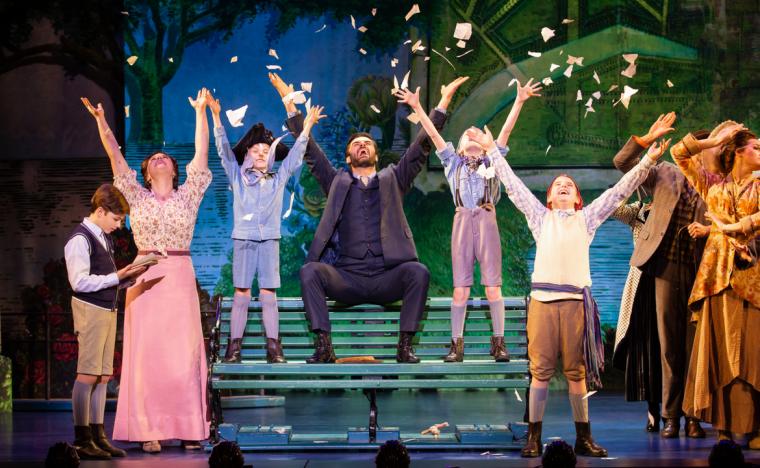 "Finding Neverland" at the Adler Theatre -- May 7. (photo by Jeremy Daniel)

With Variety magazine praising its “imaginative flair” and the Huffington Post calling the show “beautiful and wondrous” and “pure bliss,” the new stage musical Finding Neverland brings the joys of J.M. Barrie and Peter Pan to Davenport's Adler Theatre on May 7 – a touring production in the Broadway at the Adler series that Time magazine deemed “a spirited, tuneful, nimbly staged delight.”

As Finding Neverland begins, it’s 1904, and successful London playwright J.M. Barrie has a serious case of writer’s block. While he is working on a new play, Barrie recognizes that there is nothing original about it and the characters and plot are simply recycled from plays he’s already written. Despondent at the potential end of his career, Barrie meets the lovely and caring widow Sylvia Llewelyn Davies and her four sons – George, Jack, Michael, and Peter – in Kensington Park. They embark on adventures of imagination together … all except Peter, who is unwilling to play and still reeling from his father’s death.

As the author eventually helps Peter find his smile again, Barrie's writer’s block gives way to a new art form: children’s theatre. But the adults surrounding him are skeptical and unsupportive: Who will pay to see a play about children? Who will play these characters? And how will they make Peter Pan fly? Based on both the Oscar-winning 2004 film and the true events that led J.M. Barrie to create his seminal masterpiece Peter Pan, or the Boy Who Wouldn’t Grow Up, the Finding Neverland stage musical sings to the child in everyone's heart, and was described by NewYorkTheatreGuide.com as “full of magic, excitement, and imagination … a show that cannot be missed.”

Featuring original music and lyrics by Scott Frankel and Michael Korie, and a book by James Graham, Finding Neverland made its world premiere at the Curve Theatre in Leicester in 2012, with a reworked version making its subsequent world premiere in 2014 at the American Repertory Theatre in Cambridge, Massachusetts. Following completion of its Cambridge run, the production transferred to Broadway in March of 2015, though the musical had already garnered the interest of theatre fans the summer before, when Oscar winner Jennifer Hudson debuted its song “Neverland” on the 68th Tony Awards. Directed by Diane Paulus, a Tony Award winner for 2013's Pippin revival also nominated for her 2009 take on Hair, Finding Neverland went on to play Broadway for 17 months, its original production starring Matthew Morrison (TV's Glee) as Barrie and Kelsey Grammer (TV's Frasier) as the villainous character named Hook.