Everybody Hurts: “Gruesome Playground Injuries,” at the QC Theatre Workshop through October 6 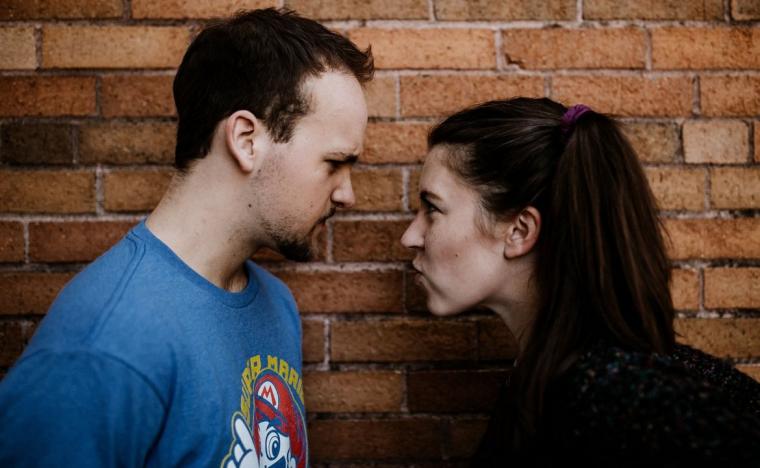 Move over Romeo and Juliet – there are new star-crossed lovers in town. The QC Theatre Workshop’s latest production, Gruesome Playground Injuries, explores both pain and possibility in a tale of lifelong friendship and love.

Written by Rajiv Joseph, Gruesome Playground Injuries follows two kids who meet serendipitously in the elementary-school nurse’s office. Doug (Tristan Odenkirk) was playing “Evel Knievel,” resulting in a fairly minor injury considering he rode his bike off the roof, and Kayleen (Joanna Mills) has tummy troubles. The two eight-year-olds bond nearly inexplicably, as Kayleen seems curiously overwhelmed by high-energy Doug, and Mills and Odenkirk brought a squirmy physicality to their third-grade selves on opening night; there was a sense of familiar joy in the theatre as the first scene concluded.

Joseph’s story then veers off into a time warp, as we next see Doug and Kayleen at 23. Again, Doug has done something stupid and Kayleen swoops in to help. And so the story goes as the pair ages and rewinds over a 30-year span, each incarnation providing a few more pieces to the puzzle of who these characters are. In this delicate dance directed by Max Moline, Gruesome Playground Injuries begs the question throughout: Which is more gruesome – a physical or an emotional injury?

Doug’s reckless boy-turned-man-child seems to have no fear of heights – or poor choices. Exactly none of Doug’s many injuries appear to faze him, as the only thing that seemingly grounds him is Kayleen. Odenkirk’s take on the character is absolutely intoxicating to watch. Whenever Odenkirk is on stage, he is solely focused on Mills, his eyes following her every move. No matter if he is playfully goading or pleading for her healing touch, Odenkirk’s passion, to the actor's credit, appears borderline-obsessive.

Doug certainly has the physical Injuries of this production all wrapped up … until he doesn’t. About halfway through, we find out how much Kayleen struggles, and even though she’s always been Doug’s healing angel, it turns out Kayleen depends on Doug just as much as he depends on her. Mills brings a quiet discomfort to Kayleen; there’s always a sense that she's internalizing something bigger than she lets on with words. Kayleen’s exasperation is understandable, and Mills finds a solid balance between anger and joy every time Kayleen reacquaints with her childhood friend.

As Doug and Kayleen are a pair connected by childhood memories, they have a special kind of friendship in which they feel strongly bonded, even after years of losing track of one another. Odenkirk and Mills depict a clear familiarity with each other, but in a tentative way that makes the relationship they personify completely believable.

Unfortunately, because of the non-linear timeline, the audience is stuck, during every scene change, literally staring at a brick wall and absorbing the implications of what just happened. (Scenic designer Matt Elliott gave us a minimalistic set – primarily the aforementioned wall and two benches – and, for better or worse, we got to thoroughly know these set pieces.) Yet while some of these scene breaks seemed long, I don’t personally see a way around the problem given the way this script is written, and appreciated this production’s excellent use of sound design (care of Odenkirk) to fill our senses while waiting for the actors to change. With a wide array of costumes care of Kelci Eaton, Doug is decked out, more often than not, in a variety of sports teams’ T-shirts, no matter what age he is. Kayleen, meanwhile, was the champion of neutrals, a wise costuming decision that really suited her emotional states. 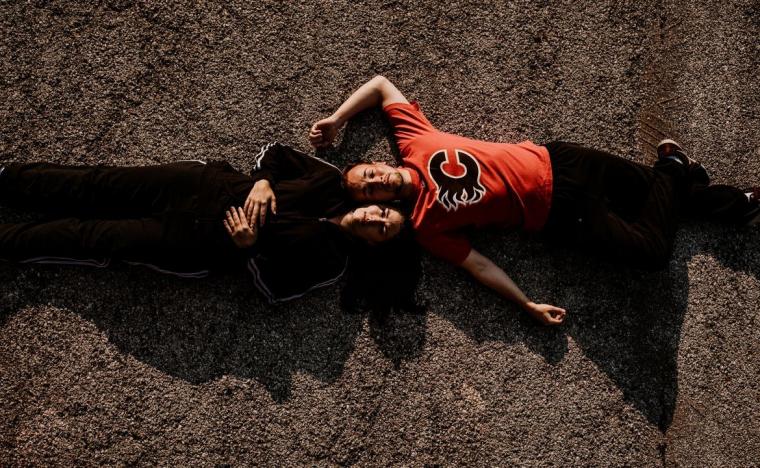 Gruesome Playground Injuries sandwiches some exquisitely horrific moments with more lighthearted connections; life, after all, isn’t all drama all the time, and Kayleen's and Doug’s friendship is based on more than wounds. The comedic highlight of Moline's production came when its characters found themselves back in the nurse’s office – this time while in junior high. Odenkirk isn’t afraid to throw himself around, even with a bum ankle resulting in a hilarious wobble, but it was horrifically funny when the disgusting, sloshing garbage can came into play. (During Friday’s performance, a rogue cricket also hopped its way across the stage during one of the scene changes, swiftly meeting its demise in Odenkirk's foot as the actor playfully entered the stage. Live theatre, folks: During each performance, you never know what you’re going to get.)

With this production, Moline finds a balance in each new chapter of the characters' relationship, and even when the pain in the theatre became palpable, there was beauty in it. A stillness descended on stage as Doug and Kayleen aged, which was contrasted by the exaggerated movements of their youthful scenes, and seeing Odenkirk and Mills portray a variety of ages both older and younger than their actual selves was fascinating, especially considering how often they ricocheted around.

The QC Theatre Workshop's latest presents an intimate look into enduring friendship, and whether or not you can relate to this non-traditional love story, you'll almost certainly respect it. A truly mesmerizing piece of art, Gruesome Playground Injuries is riveting, passionate, and as intriguing as it is heartwrenching.

Gruesome Playground Injuries runs at the QC Theatre Workshop (1730 Wilkes Avenue, Davenport) through October 6, and more information and tickets are available by calling (563)823-8893 or visiting QCTheatreWorkshop.org.