We Eat, They Drink, Everyone's Merry: "The Savannah Sipping Society," at the Circa '21 Dinner Playhouse through November 7 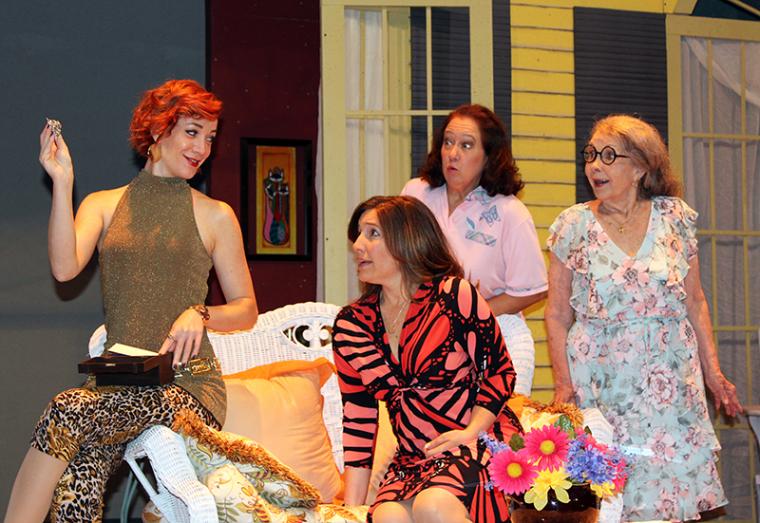 It’s been a painfully long wait, but I finally got to crack open my new notebook and fresh pen for Wednesday night's performance of The Savannah Sipping Society at the Circa '21 Dinner Playhouse. It felt really good to be back in the theatre, and even with new safety measures in place, there was a sense of normalcy – not to mention anticipation, as it had been roughly 180 days since the dinner theatre’s last mainstage performance. Written by Jessie Jones, Nicholas Hope, and Jamie Wooten, the comedy found its Wednesday matinée and evening shows sold out given the 50-guest state limit restriction for the Playhouse, and as producer Dennis Hitchcock said, “It is exciting to be back … . People really want to get out and just have some fun.”

(Regarding that guest limit, Circa '21 has been categorized during the COVID-19 pandemic as a theatre instead of a restaurant, which puts tight constraints on how many patrons are allowed in the doors. I, for one, would love to see the state fairly re-categorize the venue as a restaurant considering it is a dinner theatre and tables are set up restaurant-style. The space is certainly large enough for adequate social distancing without grossly stunting the 334-guest capacity.)

Circa '21 implemented the mandated safety measures by taking guest temperatures at the door and requiring everyone to wear masks to enter the theatre and while away from their tables. As far as the actresses go, they did not wear masks – except for in a short scene in which Dot is going to start hot yoga class and she walks in with a mask on and sanitizes her hands. During the rest of the show, the cast would bump elbows and remained six feet apart. The stage, meanwhile, is more than six feet away from the front row seating, and guests were seated at every other table to allow adequate distance from each other.

Directed by Warner Crocker, The Savannah Sipping Society's evening show was charming and heartfelt, and it appeared that everyone was enjoying themselves. The audience was welcomed by a beautifully warm and inviting porch set designed by scenic artist Susan Holgersson, and there was a gorgeous, lush veranda accented with a glowing blue backlight by lighting designer Heather Hauskins. She cleverly situated another rosy, orange light just inside the front porch that accentuated the well-designed wooden frame and windows of this elegant Southern home. 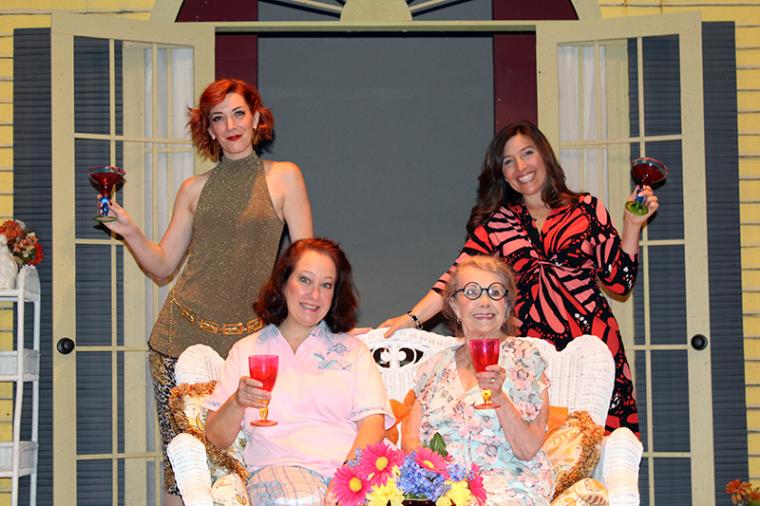 Brad Hauskins and Kirsten Sindelar were the only two members of the performing wait staff – the Circa '21 Bootleggers – on duty Wednesday night, and table service was provided. A well-deserved shout out is in order for Chef Tony and his right-hand man Austin for the delicious choice of evening entrées. Hauskins and Sindelar handled their duties like the seasoned professionals they are, shining in the minimized Bootlegger show that found Sindelar belting out “It’s All Coming Back to Me Now” Glee-style while Hauskins had a captivating moment with his song, Neil Diamond's “Cracklin’ Rosie.”

As for the main production, it was joyful and absolutely encouraging to watch four actresses do such a superb job. The Savannah Sipping Society storyline was easy to follow, as we witness their Southern women falling into new, middle-aged identities while sipping on Kentucky bourbon and eating cheese. The adorable characters begin their journey of unfamiliar adventures and life events as they also try to heal from past hurts and disappointments, and each actress – all of them collaborating very well and a pleasure to watch – brought a unique drawl and personality to the table.

Kim Kurtenbach, as the architect Randa who loses her job to a younger man, was absolutely delightful, making her character spunky and fun. Kurtenbach’s comedic timing was spot-on on Wednesday, delivering her hysterical one-liners with ease. Sherry Konjura, playing the soft-spoken widow Dot, was simply precious. I so enjoyed the actress, with her sweet spirit and ability to smooth over slight stumbles in her line deliveries. 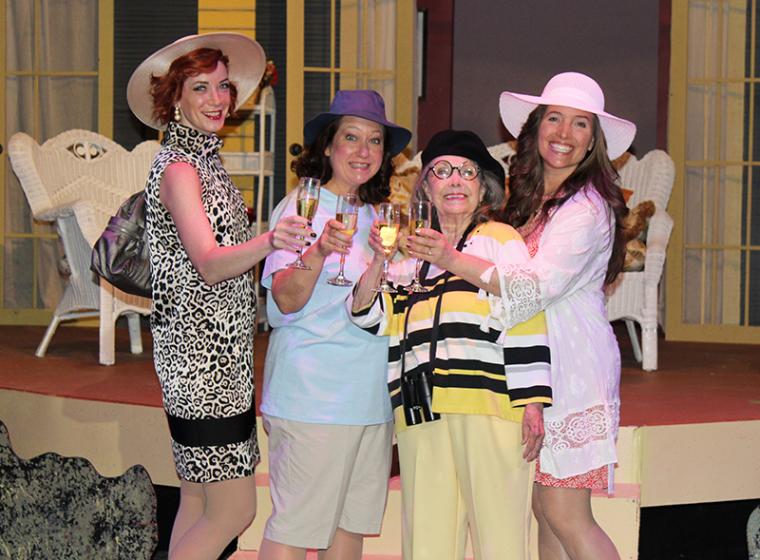 Rachelle “Shelley” Walljasper is a natural talent who makes acting look easy. Her role as Marlafaye, the jilted wife who is bitter about her divorce, was outstanding and hilarious. At one point, she was dressed up like a jester, and boy did Walljasper make that character come to life. Nicely rounding out the cast was Sarah Hayes as the life coach and sultry beauty Jinx. Hayes commanded the stage with her tall stature and soothing voice, displaying old-Hollywood charisma and charm.

As usual, Gregory Hiatt’s costume designs were exquisite, providing the characters with colorful dresses and gowns that also included full Renaissance garb. I was impressed with all the accessories as well, especially those belonging to Jinx, who was decked out in gold from head to toe sporting shiny sandals and delicate chain belts with lovely earrings and bracelets. Randa also had on a beautiful monarch-butterfly-looking dress that was extremely vibrant. The costumes alone were enough to brighten anyone’s spirit, and sound designer Tristan Odenkirk inserted authentic and well-done effects such as ambulance sirens and distant thunder that added to the evening's professional polish.

As a whole, and as an official reopening show, Circa '21's The Savannah Sipping Society is a perfect escape from the day-to-day ups and downs of the world we live in, offering hope in spite of adversity. I was personally moved by the uplifting theme of this production – one that inspired viewers to not let life beat them down, and to be fearless in the face of difficulty. What an appropriate “Welcome back!” that everyone can relate to during these unprecedented times.

The Savannah Sipping Society runs at the Circa '21 Dinner Playhouse (1828 Third Avenue, Rock Island) through November 7, and more information and tickets are available by calling (309)786-7733 extension 2 or visiting Circa21.com.