Bell and Whistles: “The Hunchback of Notre Dame” at the Spotlight Theatre through October 14 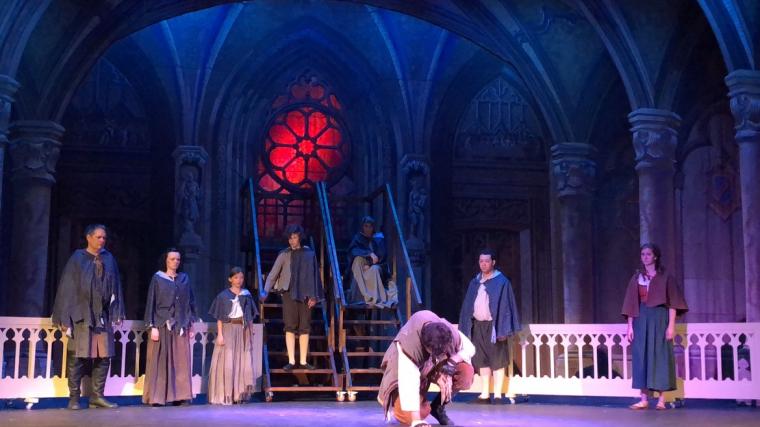 Adam Sanders and company members in The Hunchback of Notre Dame

There was a sanctuary in the sanctuary, and what a gorgeous venue: the Spotlight Theatre nestled inside the old Scottish Rite Cathedral in downtown Moline. Consequently, you could feel the excitement in the air for the opening night of co-owners and co-directors Brent and Sara Tubbs’ first musical, The Hunchback of Notre Dame. And boasting songs from the Disney film, music by Alan Menken, lyrics by Stephen Schwartz, and a book by Peter Parnell (based, of course, on Victor Hugo's novel), this production was the perfect opener for this magnificent site.

With its spacious stage and grand high ceilings that echoed a beautiful, robust sound, the acoustics were amazing, and when the majority of the cast was singing, the show was a rich experience. At times, however, Friday's sound system fell a little short, as certain members of the company could not be heard due to microphone issues or lack of projection. That being said, the show itself was outstanding.

Mr. and Mrs. Tubbs clearly wore many hats on this production, being co-directors, lighting designers, set designers, and costume designers, all of which they accomplished superbly. The natural design of the cathedral itself complemented the entire show – choosing The Hunchback of Notre Dame as their first musical was a very smart move on their parts – with a full choir positioned stage-right and in the balcony adding an additional element of melodic interest. 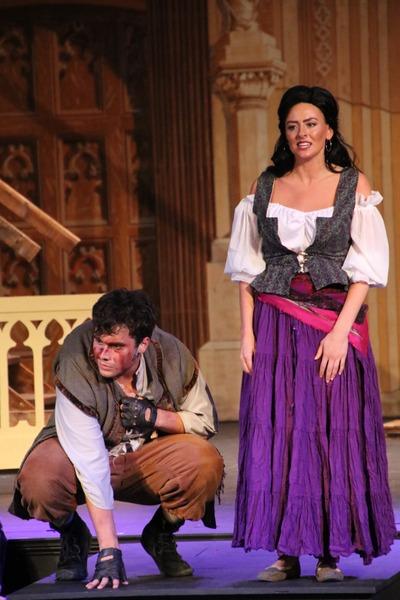 Adam Sanders assumed the leading role of Quasimodo, the deformed hunchback who is cursed to forever be a bell-ringer in the Notre Dame cathedral, and what an incredible performance he gave. At times, I completely forgot he was acting, because his transformation into his desperate character was pure genius. Sanders left it all on the stage, pouring out such passion with his entire body engaged at all times, and acting with his eyes in the most entertaining way. I could feel Quasi’s every emotion as the actor would lunge, jump, squat, and engage the audience with his whole persona while also delivering powerful vocals – which, in this performance, was just icing on the cake.

Christopher Tracy, who had no problem projecting, was believably pious and well-suited for his role as Dom Claude Frollo, the Archdeacon of Notre Dame. Tracy’s full-bodied voice and demeanor were perfect matches for his character as he lorded over Quasimodo, explaining to him the evils of the outside world. At times, Frollo would also enter and exit through a door built into the bottom of the stage, which was quite effective, and the Tubbs' employment of accompanying red glowing lights really added to the mood created by his character.

Heather Herkelman played Esmeralda, the beautiful yet caring gypsy known for her seductive dancing ability. Watching Herkelman, I occasionally felt like I was actually watching the Disney film, as the performer nailed her character while also being the epitome of a Disney princess. She was precise with Tommy Wallace’s choreography and really delightful to watch. 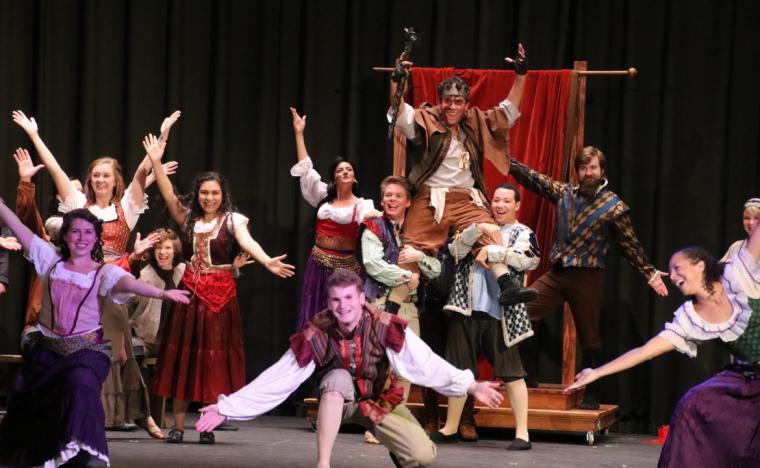 As captain Phoebus De Martin, Ian Sodawasser had such fabulous stage presence that it was hard to take your eyes off him. The actor’s natural good looks, charm, and excellent vocals made for a very well-rounded character as the womanizing captain with whom Esmeralda falls in love. While his tall stature was really noticeable, the height difference between Sodawasser and Herkelman worked well, and the stage chemistry between the actors was palpable. In his role as Clopin Trouillefou, Andy Curtiss played the leader of the gypsies conservatively, with his long beard and mustache a perfect look that made a huge impact on his character.

But Hunchback features so many additional performers worthy of praise that I couldn’t possibly mention every one of them here. I will say, however, that the younger actresses that stood out were Emily Winn, who shared her lovely singing voice as a gypsy, congregant, and gargoyle had a lovely singing voice, and the talented Wrigley Mancha, who also portrayed a gypsy and a congregant.

Meanwhile, the Hunchback of Notre Dame props assembled by Cherie Lyman were phenomenal, and I especially liked the authentic-looking torches that were glowing with realistic fire effects. Set builder Jason Passini and the design team also did a great job with the bell's huge rope that dangled from center stage and reminded us of Quasimodo’s torturous burden.

All told, the Spotlight Theatre's cast and crew hit it out of the park with Friday's Hunchback, and I look forward to seeing many more shows at this unique theatre. I’m also excited for the Tubbs and their new adventure – the journey is going to be fun.

The Hunchback of Notre Dame runs at the Spotlight Theatre (1900 Seventh Avenue, Moline) through October 14, and more information and tickets are available by calling (309)912-7647 or visiting TheSpotlightTheatreQC.com.