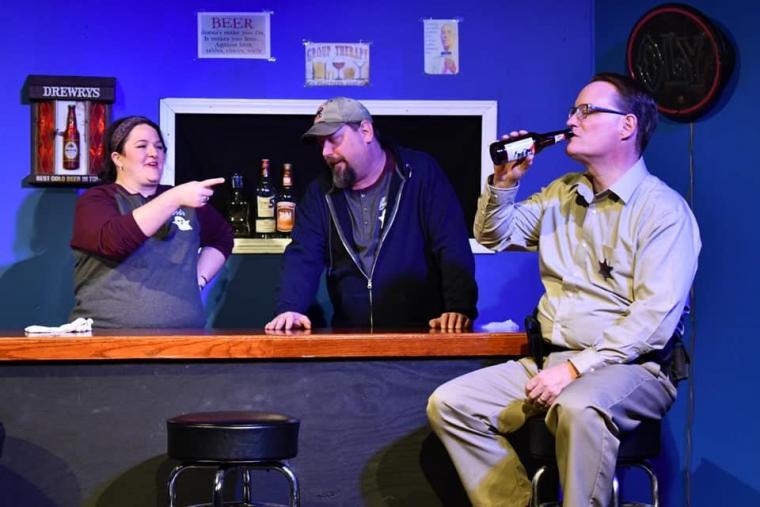 The Black Box Theatre’s current show, Losers Bracket, isn’t exactly like the '80s sitcom Cheers, and Saturday’s theatrical barroom brawl was rife with profanity and strobe light effects that, for me, were painful. This tale of insurance fraud, dysfunctional relationships, and greed that all unfolds in a Chicago tavern known as Boo’s featured a few one-liners that I found funny – but other than that, I'd have to say, “Not my cup of tea.”

Written by playwrights Clay and Nate Sander and directed by David Bonde, Losers Bracket is a fundamentally raunchy story that glorifies deception and bullying, which I found quite off-putting and mean-spirited. The show did have a few redeeming qualities, however, among them the talented actors who, in my opinion, took a lemon and made lemonade. Michael Richards, the triple-cast performer who played Rick Potts, Lance Mangler, and Executive Tom, was particularly phenomenal in his ability to go from nerdy insurance representative to self-absorbed yuppie. I loved the way he changed his voice and exaggerated his facial expressions to completely transform himself into each character, and on Saturday, Richards seemed to be the most relaxed and confident member of the cast.

The Sanders' plot revolves around Hitch Bigwood (Brant Peitersen), a man who has a noticeable limp due to a forklift accident at the town factory 10 years prior that got him a massive settlement. Later in the play, however, we learn that Hitch has been faking the limp for quite some time to avoid paying back the insurance company for the fraudulent claim. Meanwhile, bar owner Boo Koontz (Emmalee Hilburn) and Hitch have a love/hate relationship, and while both characters are rough around the edges, Peitersen and Hilburn were at least cute together, and definitely shared some stage chemistry. 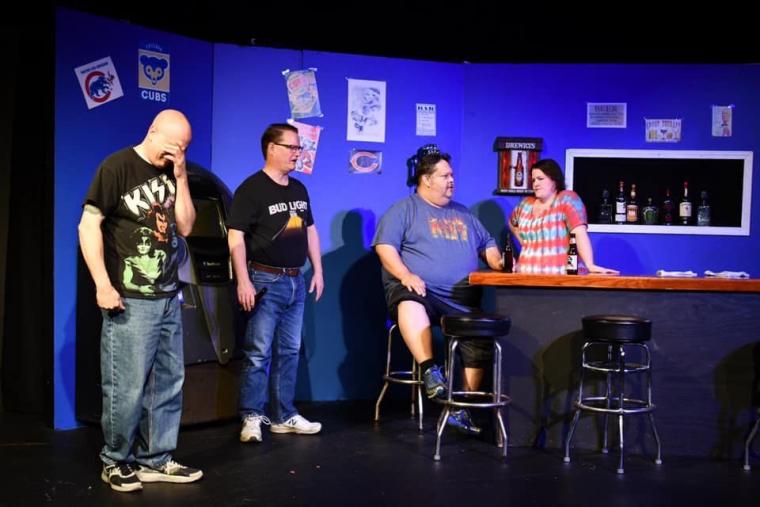 Meanwhile, “Tiny” Willits (Tony Trulson) and Ethan Banks (Mark Kulhavy) spend most of their free time hanging out at Boo's Tavern in the small, working-class community of Downs Moor. Tiny and Ethan are similar to Tweedledee and Tweedledum; although they're not identical twins, their density and dumbness are equal. Trulson, the kind of actor who just grows on you, displayed evident comedic timing, while Kulhavy tended to run his lines together without much expression and came across a bit flat.

Kevin Keck portrayed the inept and corrupt Sheriff Terry Edwards who frequently sat at the end of the bar drinking a beer and chomping on a hamburger. Through his quirky body movements and gestures, Keck had a way of drawing my attention even when he wasn’t speaking. And rounding out the cast was Kelci Eaton, whose voice was quite funny as Madge, the older woman on a walkie-talkie who was hard of hearing and requested Sheriff Edwards to pick up her mail. Eaton also played Tiny's ex-girlfriend Trisha and the insurance representative Anne, performing both roles with enthusiasm. 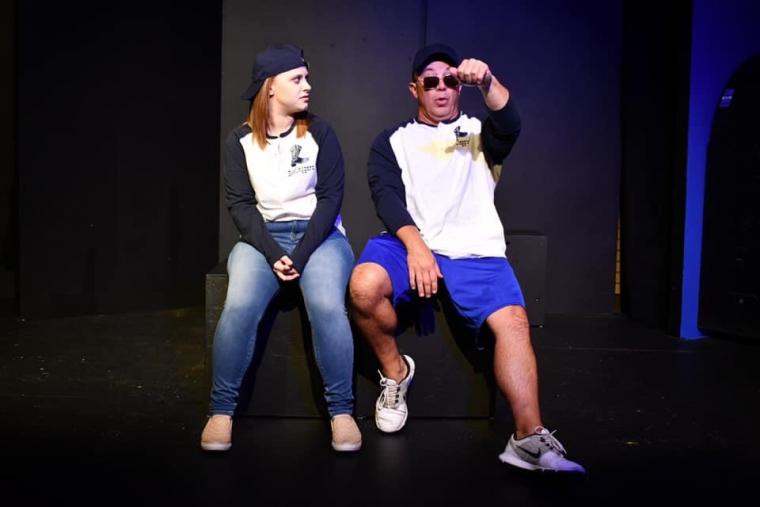 The scenic design and lighting by David M. Miller made Losers Bracket look like it was taking place in an authentic tavern, with the set consisting of an old-fashioned wood bar, antique-looking jukebox, and various Cubs memorabilia all glowing beneath overhead lights. The costumes by Lora Adams entailed an assortment of old T-shirts for most of the men advertising old movies such as Jaws and Batman, as well as the legendary rock group KISS. Richards' characters and costumes were the most creative, with the actor wearing a brown corduroy jacket and green bow tie as the nerdy insurance man and then changing into turned-up collars, visors, and golf shoes for his yuppie persona.

Bonde often staged his Losers Bracket actors so they simply sat on small black boxes placed in the center of the stage as they mimed imaginary fishing poles and steering wheels, which I found refreshing, as it reminded me of childhood make-believe. (This actually prompted me to look up the history of black-box theatre, where I found out that the idea was part of an experimental-theatre upsurge that began in the 1960s and was designed to give productions more neutral settings that allowed for a wide variety of design and staging choices.) And in fairness, I am a big fan of Moline's own Black Box Theatre … just not a big fan of this particular production. There was a lot of dead air between Losers Bracket scenes, and for those of you who may also be adversely affected by strobe lights and a lot of profanity, you may want to take a pass on this one.

Losers Bracket runs at the Black Box Theatre (1623 Fifth Avenue, Moline) through November 24, and more information and tickets are available by calling (563)284-2350 or visiting TheBlackBoxTheatre.com.