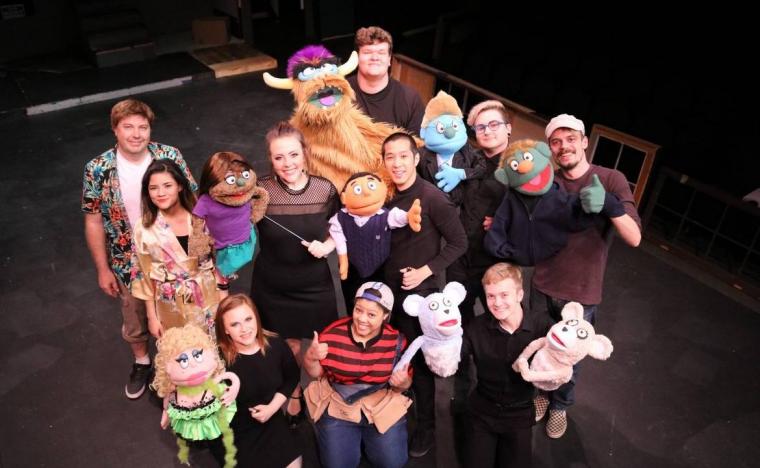 Lauded by the New York Times as a “breakthrough musical” that's “savvy, sassy, and eminently likable,” Broadway's puppet-filled smash Avenue Q brings hilarity, unforgettable songs, and loads of sweetly filthy material to Moline's Playcrafters Barn Theatre May 10 through 19, its blend of modern snark and old-fashioned charm described by The New Yorker as “an ingenious combination of The Real World and Sesame Street.”

Winner of the Tony Award "Triple Crown" for Best Musical, Best Score, and Best Book in 2004, Avenue Q is part flesh, part felt, and packed with heart. This laugh-out-loud musical tells the timeless story of a recent college grad named Princeton, who moves into a shabby New York apartment all the way out on Avenue Q. He soon discovers that, although the residents seem nice, it's clear that this is not your ordinary neighborhood, and together, Princeton and his new-found friends – among them the adorable Kate Monster, the odd-couple roommates Nicky and Rod, and former child star Gary Coleman – struggle to find jobs, dates and their ever-elusive purpose in life.

Filled with gut-busting humor, and a delightfully catchy score, Avenue Q's long Broadway run of more than 2,5000 performances made it the 24th longest-running show in the history of the Great White Way. And although the show addresses humorous adult issues, it is similar in style to a beloved children's show – a place where puppets are friends, monsters are good, and life lessons are learned.

Avenue Q will be staged at the Playcrafters Barn Theatre from May 10 through 19, with performances Fridays and Saturdays at 7:30 p.m. and Sundays at 3 p.m. Admission is $10-13, and more information and tickets are available by calling (309)762-0330 or visiting Playcrafters.com.