All the Newsies That's Fit to Print: "Newsies: The Musical," at the Circa '21 Dinner Playhouse through February 23 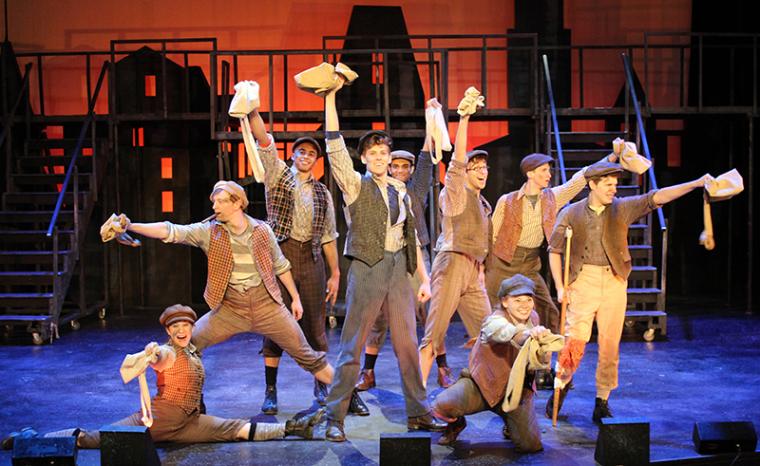 Noah Lindquist and company members in Newsies: The Musical

Extra! Extra! Read all about it: The Circa '21 Dinner Playhouse is currently presenting Disney’s popular Broadway adaptation Newsies: The Musical! A high-energy entertainment loaded with incredible dancing and brilliant singing that packs a solid punch, the January 17 preview performance was already polished and didn't disappoint, and felt more like an opening-night performance as the cast delivered an exceptionally enjoyable show.

Based on the 1992 film musical, Newsies is set in 1899 New York, where Manhattan's charismatic teenage newsboy Jack Kelly (Noah Lindquist), his friend Crutchie (Derrick Bertram), and their ragamuffin team sell copies of the New York World newspaper. After the prices of the paper are unfairly hiked up by the greedy and powerful publisher Joseph Pulitzer (John Payonk), however, the poor newsboys, many of them homeless orphans desiring a better way of life, take on the powers-that-be. A strike ensues, and the underdog newsies come out swinging in an effort to fight injustice.

With its music by Alan Menken, lyrics by Jack Feldman, and book by Harvey Fierstein, Newsies was the recipient of Tony Awards for Best Choreography and Original Score, and director/choreographer Jay Cranford did an outstanding job of creating a visually engaging, exciting show that captivated my attention and inspired my heart. And Erica Zaffarano's scenic design consisted of a silhouetted New York City skyline and sparkling starry sky that made a fantastic backdrop to Cranford's talented company of actors. Mobile high-rise platforms with multiple staircases were utilized so the performers were perched high enough for even those of us seated furthest from the stage to easily see everything going on from scene to scene. 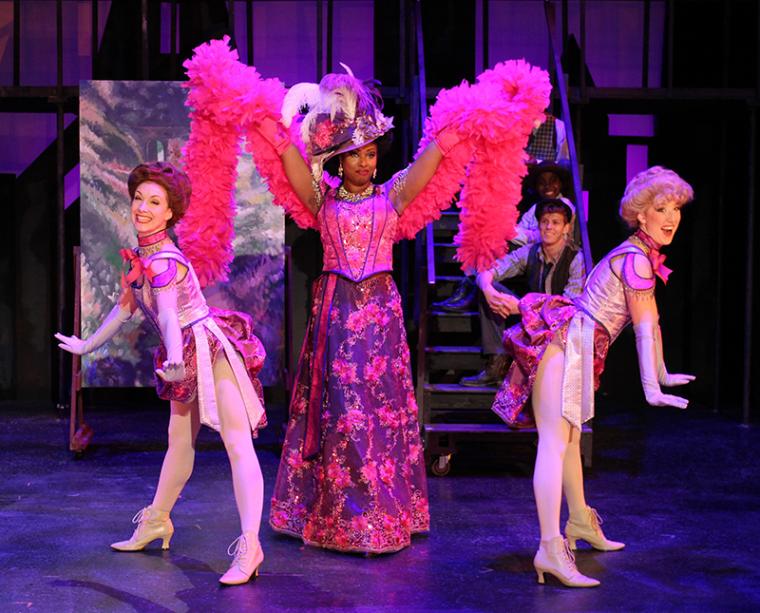 Lindquist’s boy-next-door good looks and charm really added to Jack’s likeability; even though his character has a tough exterior, his heart is soft. I particularly enjoyed the rich quality of Lindquist's voice while he sang fantastic songs such as “Santa Fe,” “Carrying the Banner,” and his beautiful duet “Something to Believe In” as Jack falls in love with Kelly Urschel’s Katherine Plumber. A reporter for the New York Sun, Katherine takes an interest in the newsies while trying to write a riveting story so as to earn respect from the men in her field, and Urschel, who makes acting look easy, gave a flawless performance. I especially loved her in the tap-dance sequence at the opening of Act II in which she and the rest of the ensemble belt out the tune “King of New York.”

The gorgeous Antoinette Holman-Nebinger was dazzling as Medda Larkin, a big-voiced saloon singer (inspired by the vaudeville performer Aida Overton Walker) who offers her theatre as a safe haven, is a good friend to Jack, and supports the newsies in their fight for justice. Holman-Nebinger carried herself like a true pro and wowed me with her sassy solo “That’s Rich,” and was also decked out in a hot-pink gown, long silky gloves, huge feather hat, and magnificent jewelry by costume designer Gregory Hiatt. As for the newsies themselves, they were clad in tattered pants, caps, and vests that were worn out and dirty-looking, with their faces smudged in dark makeup that added to their convincing street look.

There are so many talented actors in Newsies' cast that I don’t have words enough to write about all of them, but a consistent scene-stealer who I found absolutely delightful was Trey Gordon. In his rendition of Les Jacobs, a precocious younger newsie with a natural ability to sell papers, Gordon's stage presence, animated facial expressions, and large, communicative eyes reminded me of a young Ben Vereen. Les’ bright big brother Davey, meanwhile, becomes the brains of the resistance, and Darrington Clark’s presentation of the role was crisp and clean as he delivered a stirring performance that was both believable and inspiring. 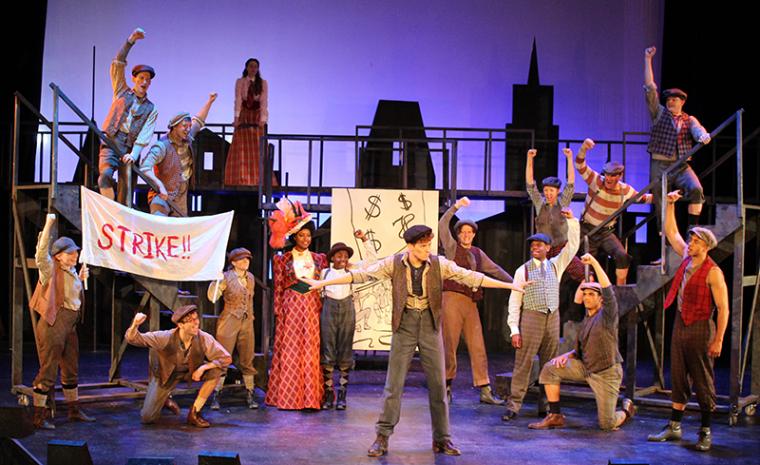 Tom Walljasper portrays Wiesel, or rather “Weasel” – the nasty man who runs the distribution center for the New York World newspaper and is assisted by the intimidating Delancey Brothers (Brad Hauskins and Tristan Tapscott) who keep order by any means necessary. Walljasper always goes the extra mile in his character development, and I loved how he incorporated a strut for Wiesel as he walked about the stage exhibiting various exaggerated tics and body movements that made the character even more disgusting.

As for the highly skilled dancers led by dance captain Danielle “Dee Dee” Fattore, they pulled off their complicated leaps, turns, steps, and formations effortlessly in this production; I was exhausted just watching them. All of the actors also pitched in when it came time to transition platforms as they were frequently moved about, and in the end, the audience rose up in a standing ovation awarded to the entire Newsies company for a job very well done.

Newsies: The Musical runs at the Circa '21 Dinner Playhouse (1828 Third Avenue, Rock Island) through February 23, and more information and tickets are available by calling (309)786-7733 extension 2 or visiting Circa21.com.