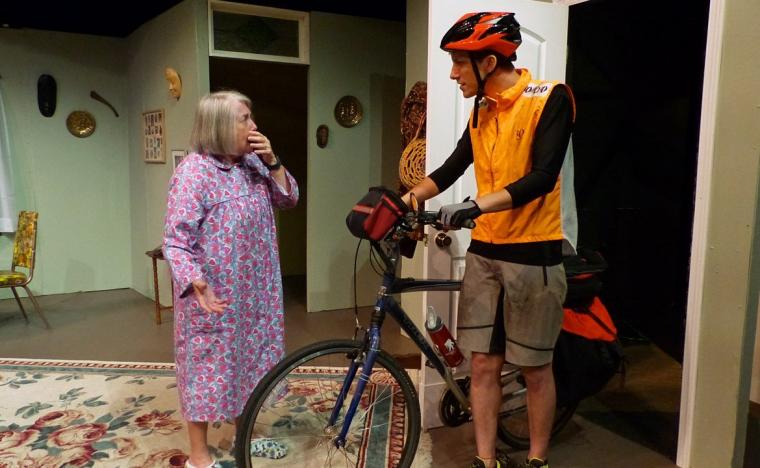 Lauded by Time magazine as a “family drama that really sticks with you” and “easily the best play of the season,” 4000 Miles enjoys an October 11 through 13 run as the final production in the Playcrafters Barn Theatre's 2019 Barn Owl Series – a work whose off-Broadway run inspired the New York Times to rave, “Plays as truthful and touching and fine as Amy Herzog's 4000 Miles come along once or maybe twice a season, if we're lucky.”

The winner of the 2012 Obie Award for Best New Play and a 2013 nominee for the Pulitzer Prize for Drama, 4000 tells of the complicated relationship between family members separated by seven decades. After suffering a major loss while on a cross-country bike trip, 21 year-old Leo seeks solace in the form of his feisty, 91 year-old grandmother Vera in her West Village apartment in New York. Over the course of a single month, these unlikely roommates infuriate, bewilder, and ultimately reach out to one another as 4000 Miles looks at how two outsiders find their way in today's world. After its successful off-Broadway run and a series of additional productions in the United States, Herzog's play traveled to England and then to Australia, where 4000 Miles earned two Sydney Theatre Award nominations and completed a national tour. As John Shand wrote in his Sydney Morning Herald review: "If your heart is sick or just needs warming, go and see this play. If you are a baby boomer who doesn't understand your grandchildren or are from Gen Y and, like, really weirded out by your grandparents, go and see this play. If you simply love theatre, go and see this play.”

Directing and lighting designing 4000 Miles for Playcrafters is area-theatre veteran Jennifer Kingry, a frequent director and designer for Geneseo's Richmond Hill Barn Theatre whose recent credits include helming the venue's productions of The 39 Steps and Scapin and, as a performer, appearing in the May presentation of Silent Sky at Moline's Black Box Theatre. Portraying Leo and Vera in 4000 Miles are Playcrafters favorites Adam Cerny and Rae Mary, the former a castmate in The Woman in Black and Deathtrap, the latter a co-star in On Golden Pond and Driving Miss Daisy. And completing Kingry's 4000 Miles cast are Elizabeth Melville, who appeared in this year's Playcrafters productions of She Kills Monsters and (a work in progress), and Mary Sales, featured in Augustana College's presentations of The Children's House and Elegies for Angels, Punks, & Raging Queens.

4000 Miles runs at Playcrafters Barn Theatre October 11 through 13 with performances at 7:30 p.m. on Friday and Saturday and 3 p.m. on Sunday. Admission is $5-8, and more information and tickets are available by calling (309)762-0330 or visiting Playcrafters.com.