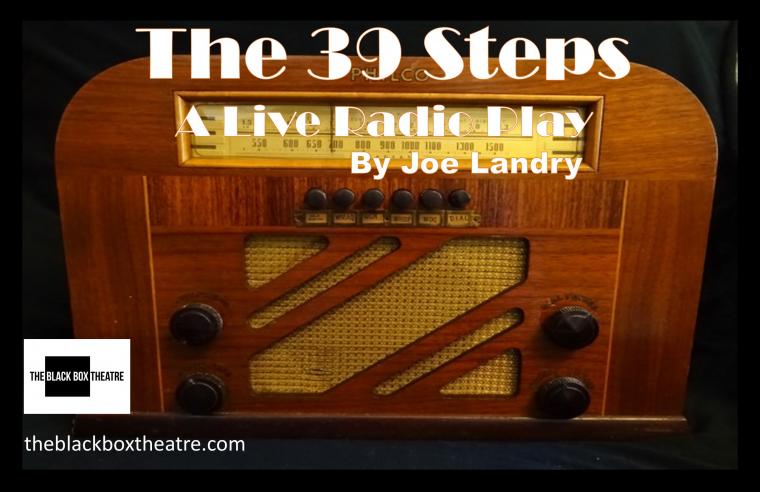 After delivering the Quad Cities' first live theatrical production in five months with the July thriller The Turn of the Screw, Moline's Black Box Theatre is set to deliver more summertime chills from August 20 to 30 with The 39 Steps: A Radio Play, author Joe Landry's unique take on Alfred Hitchcock's classic suspense film.

Performed as a live radio presentation of the period, this romantic thriller is a fast-paced ride through the signature world of cinema's master of suspense. In The 39 Steps: A Live Radio Play, Richard Hannay is visiting 1930s London when he meets Annabella Smith – a woman on the run from foreign agents – after a disturbance at a music hall. Later that night, Annabella is murdered and Hannay must then try to break the spy ring and prove his innocence. From this fast-paced thriller's epic train chase to its feisty love interest, Hannay clearly has his work cut out for him as he searches for the truth about “The 39 Steps.”

Directing the Black Box's latest presentation is the venue's co-founder and artistic director Lora Adams, whose most recent productions for the company include The Man with Bogart's Face, Lady Day at Emerson's Bar & Grill, I Never Saw Another Butterfly, and last month's The Turn of the Screw. Adams also designed the thriller's set and costumes, with Black Box co-founder David Miller serving as lighting designer.

The 39 Steps: A Live Radio Play will be staged at the Moline venue from August 20 through 30, with performances Thursday through Saturday at 7:30 p.m. and Sunday at 2 p.m. As the theatre is abiding by Illinois' Phase 4 restrictions, patrons will be required to wear face masks, and only certain seats will be available in order to conform to social-distancing guidelines. Temperatures will be taken before entry, and the theatre has hand sanitizer available and will be disinfecting every seat before each show. Advance purchase of tickets is highly recommended in order to avoid the handling of money, and more information and reservations are available by visiting TheBlackBoxTheatre.com.