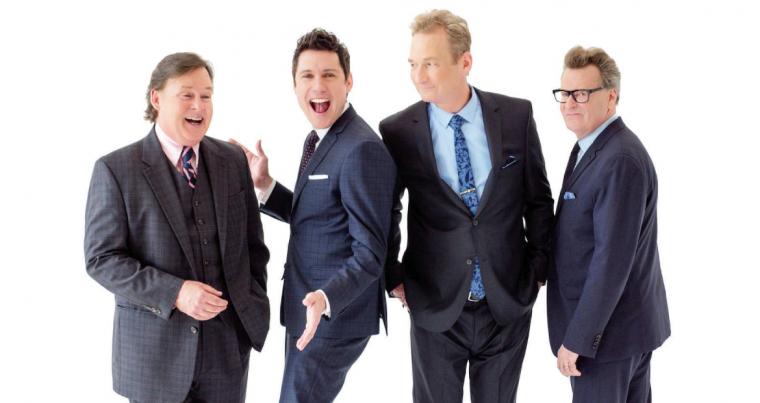 Whose Live Anyway? at the Adler Theatre -- October 9.

Quick-witted improvisation, audience participation, and loads of laughs will be on hand when Davenport's Adler Theatre, on October 9, hosts an evening with the nationally touring comedians of Whose Live Anyway? – the hilarious stage show inspired by TV's Whose Line Is It Anyway?, and boasting famed stand-up and improv comedians Ryan Stiles, Greg Proops, Joel Murray, and Jeff B. Davis.

With its rotating roster of games including such audience favorites as “Scenes from a Hat,” “Irish Drinking Song,” “Sound Effects,” and “Hollywood Director,” Whose Live Anyway? finds its four comics working together, and sometimes pitted against one another, to create the funniest scenes based on randomly selected themes, lines, and props, as well as suggestions from off-stage (and occasionally on-stage) audience members. An adaptation of the British show of the same name, the United States' Whose Line Is It Anyway? Aired on ABC and ABC Family from August of 1998 to December of 2007, while a revival of the comedy program began airing on The CW in July of 2013. In 2003, the show won a Primetime Emmy Award for co-star Wayne Brady in the “Outstanding Individual Performance in a Variety or Music Program” category, and 339 episodes of the series have aired to date.

Ryan Stiles, of the Whose Live Anyway? touring company, was also Emmy-nominated for the series, and is also known for playing Lewis Kiniski on The Drew Carey Show and Herb Melnick on Two and a Half Men. Stiles' credits also include the film comedies Hot Shots! and Hot Shots! Part Deux and the TV sit-coms Dharma & Greg and Reno 911!, and his documentary Out of Nothing received the Audience Choice Awards as the Knoxville Film and Music Festival and All Sports Los Angeles Film Festival. Greg Proops is a veteran standup comic who has recorded eight comedy albums and voiced the title character on the animated children's show Bob the Builder from 2005 to 2009. Comedian Joel Murray has enjoyed prominent roles in TV series including the Emmy-winning Mad Men, The Big Bang Theory, and Shameless, with his film credits including One Crazy Summer, Scrooged, and the Oscar-winning Best Picture The Artist. And Jeff B. Davis has been a recurring performer on Whose Line Is It Anyway?, has appeared on TV's The Jamie Kennedy Experiment and The Sarah Silverman Program, and made his Broadway debut at age 11 in a production of The King & I with Yul Brynner.