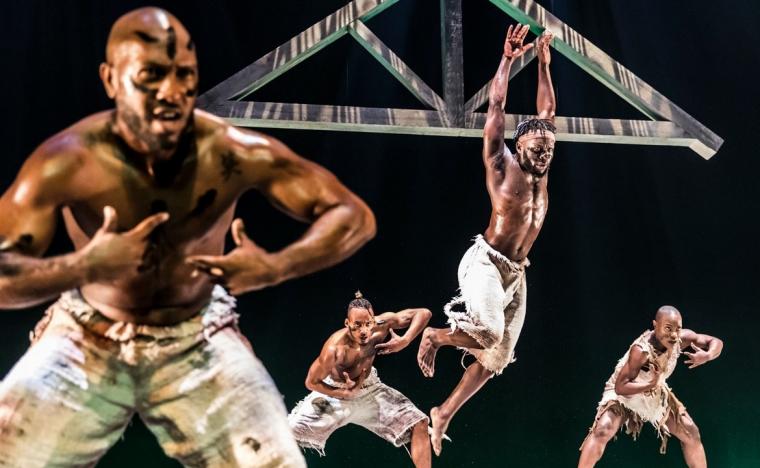 Lauded by the New York Times as an “excellent company” whose “versatile cast ably draws on West African dance and Alvin Ailey-esque motions of struggle and striving,” the gifted Washington D.C. performers of Step Afrika! deliver a world premiere in the virtual presentation Stono – a movement- and music-filled September 9 event hosted by Iowa City's Hancher Auditorium, and one sure to demonstrate why DC Theatre Scene writes of the ensemble, “Arrive in anticipation. Leave in exhilaration.”

On September 9, 1739, the largest insurrection of enslaved Africans in North America began in South Carolina on the banks of the Stono River. Twenty Africans marched south toward a promised freedom in Spanish Florida waving flags, beating drums, and shouting “Liberty!” This extraordinary act of rebellion in colonial America predates the famed Boston Tea Party of 1773, the first significant act of defiance to British rule over American colonists. And although the Stono Rebellion was suppressed, this little-known event in American history forever changed African American life and culture.

When Africans lost the right to use their drums through the Negro Act of 1740, they began to use their bodies as percussive instruments in response. This act of survival and activism earned them the name of “Drumfolk,” coined by famed folklorist Bessie Jones. Their percussive movement gave rise to some of the country’s most distinctive art forms, including the ring shout, tap, hambone, and stepping. Step Afrika's Stono highlights the spirit of resistance and activism that remains a critical part of American freedom, and the virtual premiere will be immediately followed by a live panel discussion moderated by Lesli Foster (evening anchor for WUSA) and joined by such participants as C. Brian Williams (Step Afrika's founder and executive director), Dr. Aimee Meredith Cox (Associate Professor of Anthropology and African American Studies at Yale University), and Iowa City mayor Bruce Teague. The panelists will explore the Stono Rebellion and its relevance to issues regarding political protest and structural inequities that dominate American conversations today.

Dedicated to the African-American dance tradition of stepping, Step Afrika! is a non-profit organization that tours nationally and internationally, presents residencies and workshops worldwide, and uses their fusion of South African gumboot dance and African American stepping as an educational tools.

Step Afrika!'s performance of Stono will be streamed on Hancher Auditorium's Facebook page and YouTube channel at 7 p.m. on September 9, registration for the free event is encouraged, and more information is available by visiting Hancher.UIowa.edu.