The State of Things: Hauberg Estate Mansion and Gardens 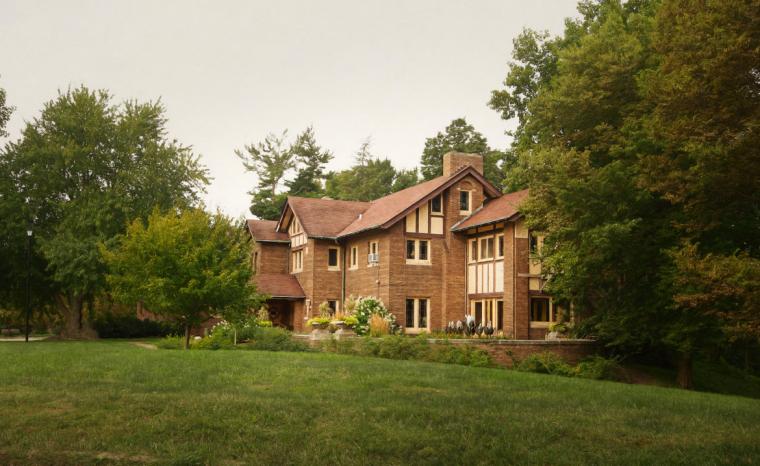 Deb Kuntzi, executive director of the Hauberg Estate Mansion and Gardens in Rock Island, discusses the venue's operations during this period of social distancing. We spoke on Tuesday, May 19.

A lot of people don't know that even though the mansion is closed, the grounds are still open. People can still walk around and enjoy the gardens, and there's a drive behind the house that they can walk on. It's quite peaceful behind there, and it's easy to socially distance on 10 acres. (Laughs.) That doesn't seem to be a problem. I'm out working in the Carriage House a lot, because right now we're trying to get all the windows in the auto house done. All the windows on the first floor of the Carriage House are plexiglass and haven't been painted in 60 years, probably. So we're taking all the old paint off and getting the windows ready to get new glass, clear glass, put in, and so I see people keeping their distance from each other. It's been really friendly here.

We've also started scavenger hunts. One of our board members – Jane Simonsen, who's an Augie professor – and her daughter painted a bunch of rocks and hid them all over the place. We put out a box with fliers explaining what to look for, and people can come and get them and do the scavenger hunt whenever they want. I thought it would attract more, like, kids and families, and it has. But I even had some teenagers come up and grab the treasure-hunt clues and off they went. That was nice to see.

We ask people not to take the rocks, and just hide them somewhere else so people can find them. But that doesn't always happen. I wasn't there, but Todd [Linscott], the chairman of our board, said there was a little girl who was about three years old, and she found one of the rocks and just put it in her pocket. (Laughs) And I'm sure that's happened more than once or twice. But that's fine – they're just rocks, and kids are kids. (Laughs.)

Plans for Reopening the Mansion

We have weddings scheduled for September and October, but your guess is as good as mine on when we can reopen. And we don't know what will happen when we can reopen. Like, the Tulip Room will normally hold 50 people … but not with social distancing. And so we have to ask, “What do we need to get down to in order to social distance?” Because if it's 10 people, none of our events are really fit for 10 except tours. And last Saturday I did a tour with [musician] Freddy Allen, and realized how hard it is to give a tour with a mask on. (Laughs.) Because you're talking constantly.

Like I said, we're working on the Carriage House, and that will probably hold about 120 people – again, not with social distancing. But if we can have 40 people, events are doable. We are planning an Oktoberfest with the German American Heritage Center for the first Saturday in October, and we were also gonna have vintage football games on the same day. But I don't know. Everything is just up in the air.

And a lot of our volunteers are older. I've already had a couple say “I can't volunteer now,” and of course I understand. But we are so volunteer-based. I mean, last year we had 5,900 volunteer hours. So there are a lot of things that we're not going to be able to get done this year. But that goes for everybody. I'm not wah-wah-ing by any means. (Laughs.) Everybody's in the same boat, and our main concern is that people are safe. If I can't keep people safe, I'm not going to do this.

Virtual Tunes in the Tulip

Freddy Allen did a virtual concert for us in the Tulip Room on Saturday, which was wonderful. I was the only one in the actual audience. (Laughs.) He does a lot of '20s, '30s, and '40s music, and he came over and just fell in love with the house and volunteered to perform. I told him, “I'll give you half of what we make.” But he said, “No, I want it all to go to Hauberg.” So we live-streamed it on Facebook and people really enjoyed it – the house is made for music.

And we'd absolutely like to do more. I have contacted a few other musicians, but I haven't had much luck in getting them to commit, because a lot of them are just working out of their homes. It might be a little easier now that some of Iowa opened up.

So if someone wants to play for us, I have no problem with that. I don't even care if the musicians give it [the proceeds] to us, because I know they're all hurting financially, and it's so important to let them play. So please get in touch! (Laughs.) It's a beautiful room and the acoustics are wonderful!

How to Support the Hauberg Estate … and Each Other

We put out a letter to our members and our donors, and we've raised about $10,000 with that so far. We pretty much exist because of our donors, our memberships, and all the events that we do, and since we can't do the events … .

So we're kind of surving right now on donors and membership. We had two people who had birthdays recently and said “Donate to Hauberg,” and one of them raised like $900 and the other raised $700. And Royal Neighbors has a program – if you have 250 volunteer hours, they give you $700 every quarter. So things like that will help. They're not huge amounts of money, but every little bit helps.

We also had a plant sale recently, and the three nurseries that were involved actually said they made the most money that they've ever made, and we get a percentage of that online ordering. We went to their cars and put everything in for them, and it all went really, really well. We'll have another one in the fall, too.

We always need volunteers, though. I did put something out on our Facebook page yesterday asking for help with our windows. We have 12 windows in the auto house that need to be stripped, and then we do the repair and sand them and get them primed and ready to go. You do have to have a certain amount of expertise to do the windows, though, because it takes about eight to 10 hours to do one window, and … . You know, they're 150 years old. (Laughs.)

But we always need help with gardening. I mean, we had four people pulling garlic mustard the other day. And there's so much painting to be done, and you can social-distance while doing that. This is the new normal, and we're gonna have to learn how to live with it and work with it. So things like volunteering would help us a lot, because it takes a lot. It's a big estate. (Laughs.) I mean, it's a big estate.