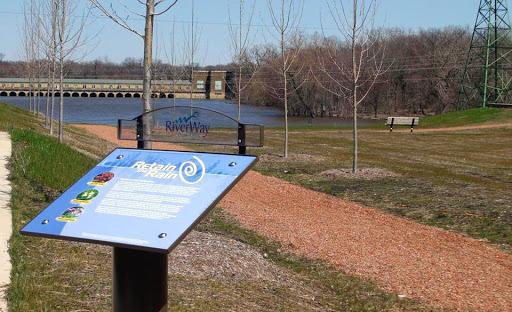 Kathy Wine, executive director of River Action in Davenport, discusses the organization's operations during this period of social distancing. We previously spoke on May 12, and again on Friday, August 28.

Our attendance for those was cut way back the first month because of the guidelines for groups and so on. It opened up, then, in July, so attendance went up accordingly. We had fewer people in June, but we've had a lot more in July and August. So yes, we've had a good response – maybe not what it always is, but I think people enjoy it. I think that's also because it's an outdoor, in-the-sunshine, on-the-riverfront kind of recreational experience.

We do require masks – and what I have noticed is that we've had really good response when we've asked people to observe the protocols. Whether it's for that or for Ride and Seek or when we did Floatzilla, it was imperative that people follow the protocols. And they did. And it kind of gave me new faith in the public-health message that the counties are putting out. That people are understanding it and following our requests.

Ride and Seek! Scavenger Hunt (held, in place of the annual Ride the River, throughout June)

Oh yes, that went really well. In fact, we had so many good responses that we're considering doing it again. (Laughs.) I mean, it lasted a month, everyone could do it on their own time, they could do it with the people they were quarantining with, their families – we found it very interesting, and it was very successful.

And it accomplished another mission besides having use of the bike trails that we support and raise money for. It also was about teaching people the history, and the culture, and the natural resources of the river, because we had clues tied to signage or art pieces that was about those kinds of things. So it was a cultural experience, as well.

And the other thing we all noticed is that there's more useage of the trails this summer, and so as a result, bike shops are busier. So those shops were very happy about giving us prizes in the way of gift cards or apparrel or helmets or whatever. That was another aspect of Ride and Seek that we liked. And people like prizes. (Laughs.)

We cut it off at half of what we usually have. We usually have over 1,600 people involved, and we cut it off at 810 weeks beforehand so we could keep the crowds down. Our plan involved keeping boats six feet apart – we put up flags where people should put their boats – and we also had a window much larger than usual for launching so that no one was crowded at the launch site. And then our buses ran all day starting at 10 a.m., so that when you got out, you could get back to your vehicle easily.

So the whole thing was different, but it went well. And again, we noticed how well people were responding to our safety guidelines, keeping their masks on when they were on the shore, and things like that. But I think if we don't have the pandemic safety concerns anymore (laughs), we'll go back to what we were doing – having a large float and taking a picture and hoping to break a record. Hopefully next year. (Laughs.)

Registrations are good for that so far, and once again, we decided that it was imperative that we rent just a single cart to people. They can choose to have someone, a spouse or whatever, on the cart with them, but no one will get out of the cart when we're doing the tours. We'll keep the distancing that way, and not expose people beyond what they would ordinarily do in their homes.

So selling the single carts is going well – we have six different tours closed already because we've reached the maximum number of people that can take part. We still have a lot that we can offer, but it's going really well.

Taming of the Slough Adventure Triathlon (September 12 at Sylvan Island)

That's still happening, because we're combining it with a workshop for youth that will correspond with a youth video competition, and that deadline is in December So we wanted to go ahead with that, and that'll give them a chance to see some of the activities that have been awarded. We're also going to have two showings of that at the Figge – at 2 and 4 p.m. – so we'll be able to accommodate everyone.

I hope that works as well as we think it could! (Laughs.) Again, we couldn't put any large groups in the Figge like we'd done in the past, and with the Environmental Film Fest, we've had standing-room-only for those in the past. So we were looking at large groups for the festival, and we have large numbers of season-ticket-holders, so we said, “Let's see if we can pack the drive-in!” So that's what we're trying to do.

Unfortunately, though, we can't have any kind of talk-back after the screenings [of Honeyland on September 20 and Anthropocene: The Human Epoch on September 27]. We're putting together a short PowerPoint so that the organizations that are sponsoring it – that's Nahant Marsh along with River Action and the Sierra Club [Eagle View Group] – can do a little promotion of upcoming things. But no, we just can't quite see how we could do that [talk-backs] at the drive-in. It gets to be a longer and later night, too – I mean, it doesn't start until it gets dark, and that's about 7:30 – and then people have another drive home. And Blue Grass isn't, you know, right around the corner. (Laughs.) But we hope people will enjoy the films.

We've tried really hard to find creative ways, this year, to do things we've done before, but differently. I think now, more than ever, people really do need to be outside. And they also need to be doing things that feel somewhat normal. (Laughs.)