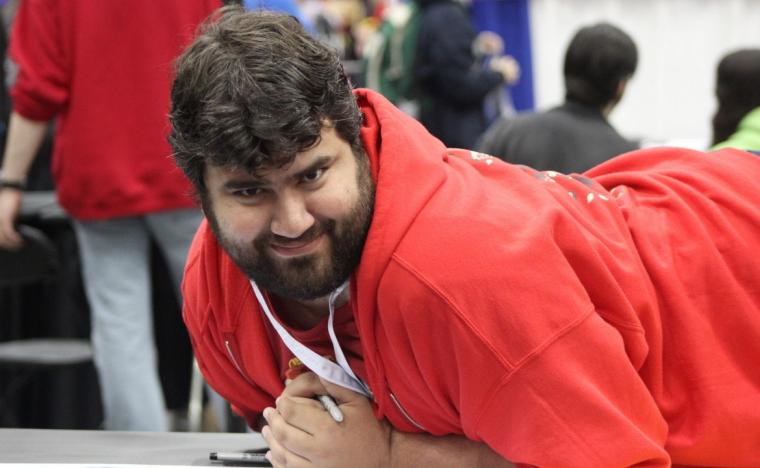 Jirard the Completionist at the Rust Belt -- November 19.

Internet gaming celebrity and YouTube personality Jirard the Completionist takes the stage at the Rust Belt on November 19 to “share several stories from his childhood to the beginning of his career.” He will also be appearing in person at an after-party at Paradigm (320 East Second Street) in Davenport.

I went into this piece of writing guessing that Jirard the Completionist was some kind of nerdcore rapper like MC Chris or something – a man with a surgical flow who populates his bars with references to video games and high fantasy. Maybe he’s goes by “The Completionist” because, I don’t know, he has a collection of every hip-hop album ever made? Well, turns out I was right about one thing: This man loves his video games. As a cultural commentator and gamer-slash-“influencer,” Jirard Khalil has amassed a giant fan base with over a million subscribers on YouTube and follower counts over one hundred thousand on such services as Twitter, Instagram, and Twitch, the live-streaming platform focused most heavily on video-game videos. He has become a trusted fountain of gaming knowledge, and his opinions on various franchises and modern games continue to steer a large demographic of fans one way or another. Far from the average influencer who might make you wonder, “What does this person actually do, and how on earth is he famous?” Khalil built his name, and indeed selected his moniker, based on his ceaseless work ethic when it comes to beating games. He makes it a point to beat one video game every week, aiming for 100-percent completion beyond the point of casual play, and often streams live game play on his channels. As I was writing this, I tuned into Twitch and there he was playing video games right before my eyes, commenting on his progress with wry observations that made him out to be a pretty charismatic guy.

Like YouTube before it, the advent of Twitch was a game changer in the way that the dreaded C-word – “content” – reaches its audience. Creators can post videos on their own time lines independent from typical avenues of publicity, racking up fans in real time and existing one click away from their audiences. As the entertainment industry continues to veer toward the streaming model, we’re reaching the point where YouTube celebrities and their millions of fans have more cultural cachet than many movie stars or artists that still exist in the infrastructure of the major studios. While these celebs are often singled out with the epithet “YouTube famous” by people of older generations, kids in Generation Z make no distinction between the platforms where people came to fame. To them, being a successful YouTuber has just as much if not more inherent worth and clout associated with it than, say, being on a TV sitcom. After all, where do those kids spend more of their time?

Since starting around eight years ago, Jirard the Completionist has earned his audience over the course of hundreds and hundreds of videos posted to his channel, which constitute an untold menu of options for game fans. He plays everything from old school NES games to the newest first-person shooters to curious gems from the 16-bit and Playstation/N64, and tackles them all with the same thirst for knowledge and total completion. His videos regularly rack up over a million views, while even the less popular entries in his channel tend to bottom out at around three hundred thousand views. What’s the draw here, you might ask? Well, it turns out that Jirard the Completionist is just a generally fun guy to spend some time with. His voice is lively and expressive, he makes funny observations and includes plenty of gags in his videos, and most importantly, he is not afraid to hold strong opinions about the games he plays.

This is how cultural commentators make the most direct impact in today’s increasingly hot take-filed world: They tell their audience what’s good and what isn’t, and back it up with direct evidence. They have no time for middle-of-the-road assessments – they need to take a stand on one side or the other, and inspire some ardor in their viewers. Maybe the people watching at home can’t afford to sink money into every hot new video game, or just don’t even feel like playing through them themselves. With someone like Jirard there, they can learn all about the game, experience it to the point that it seems like they played it themselves, and walk away with some real opinions delivered by a professional about what to think about it. In conversation with their friends, they can say “Yeah, that game sucks” or “Wow, that one looks amazing” and they won’t be lying, because they saw it with their own two eyes.

So what does a live “performance” of Jirard the Completionist look like? Akin to a book tour by a author or an intimate storytelling night with a musician, Jirard is going on tour primarily as a way to directly connect with his fans – to bridge that gap between the box of the YouTube video and the real world. He’ll presumably detail how he got where he is today, how he started off, and what it takes to be a gaming influencer. My guess is some live video games will be involved, but I can’t be certain. For die-hard Jirard fans, it looks like he’ll be showing up to the after-party at Paradigm, so you can shake his hand and tell him how much he means to you there.

Jirard the Completionist lands in East Moline on November 19, admission to his 7 p.m. show is $12-17, and more information and tickets are available by visiting TheRustBeltQC.com.