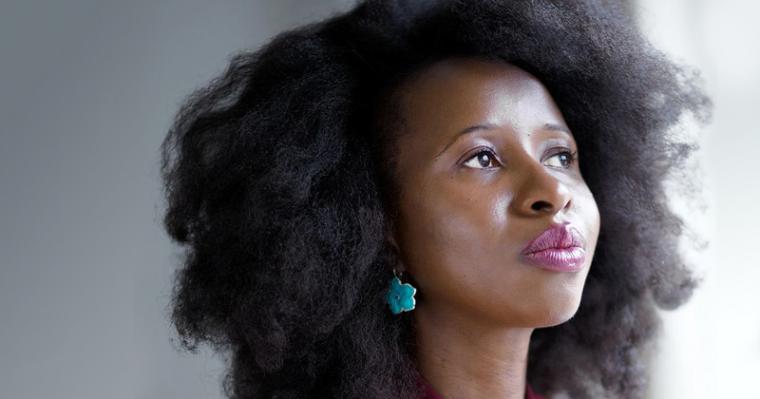 Imbolo Mbue and the Virtual Discussion “Empathy in Times of Crisis" -- November 13.

Presented by the Stanley Center for Peace & Security

Hosted by Eastern Iowa Community Colleges and Muscatine's Stanley Center for Peace & Security, the virtual discussion Empathy in Times of Crisis will gather community members for a conversation on some of the most pressing social issues of our times, with the 90-minute presentation boasting insight and opinion from author Imbolo Mbue, whose novel Behold the Dreamers garnered her the PEN/Faulkner Award for Fiction and the Blue Metropolis Words to Change Award.

As stated on the Stanley Center's Web site, “In 2020, Iowans are living in a time when the public health and economic shocks of COVID-19 are further fracturing our already polarized society. Political misinformation, xenophobia, and racism choke our collective capacities for seeing the common humanity in one another. During such times, when even the threat of political mass violence lingers over the country, Americans are reflecting on ideals such as the “American Dream” and seeking opportunities for reconciliation with our neighbors. As part of the Stanley Center’s work to promote empathy and global citizenship in our local Iowa community, we, with our partners, are organizing a virtual discussion with Imbolo Mbue, award-winning author of the New York Times bestseller Behold the Dreamers.”

A native of Limbe, Cameroon, Mbue came to the United States in 1998 to study business management as an undergraduate student at Rutgers University. After graduating in 2002, she went on to complete her M.A. From Columbia University in 2006, and began to work in the corporate sector in New York City before losing her job, along with millions of Americans, during the 2008 recession. In 2014, Mbue signed a million-dollar deal with Random House for her debut book Behold the Dreamers, which was published in 2016. The novel garnered critical acclaim for, according to NPR, the way it "depicts a country both blessed and doomed, on top of the world, but always at risk of losing its balance. It is, in other words, quintessentially American." According to the Washington Post's Ron Charles, the novel brought to light the “vast bureaucracy designed to wall off the American Dream from outsiders,” and in 2017, the novel was selected by Oprah Winfrey for her national book club. Mbue's writing seeks to explore topics regarding the complexity of American immigration policies and achievements, and overall, the pursuance of the American Dream. According to Mbue, the novel connects the characters' experiences and feelings with those of her own: financial struggles, hopelessness, reevaluation of one's goals, and struggles as an immigrant. She has stressed the importance of literature providing empathy, which she feels is lacked in immigration policies and politics.

The virtual discussion Empathy in Times of Crisis will begin at 6 p.m. on November 13, and more information and registration is available by visiting StanleyCenter.org.