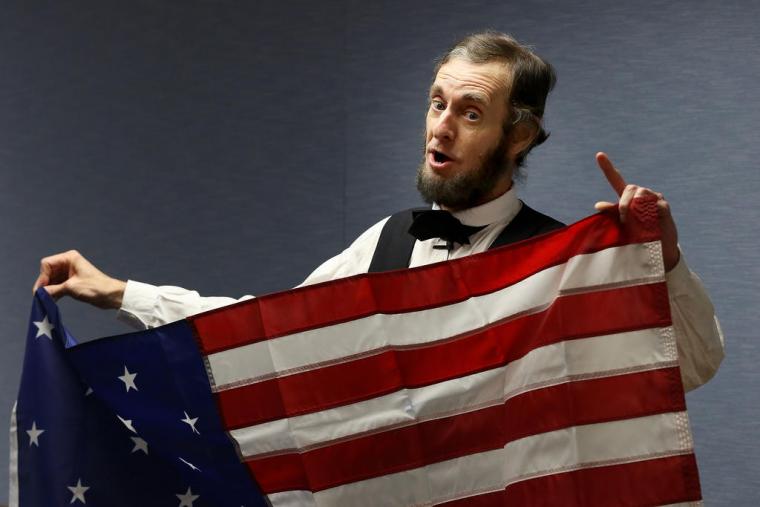 Presented by the Bettendorf Public Library

Those who have always wanted to enjoy an audience with one of world history's most famous figures will soon have an entire week to do so, with the Bettendorf Public Library hosting online October 19 through 25 presentations of actor Kevin Wood in The Political Lincoln: Honest Abe on Campaigns & Elections, the latest presentation in the library's popular Virtual Community Connections series.

This special online performance will find Lincoln, as portrayed by Wood, discussing his experiences with political campaigns and elections. In the performance lecture, Lincoln describes his many interesting campaign and election experiences over a long and eventful career, and during a time of political intrigue and tumult, when the very destiny of our nation was at stake. From 1832, when a humble 23-year-old political newcomer sought his neighbors’ vote to be one of their state representatives, to 1864, when a politically savvy, incumbent President – beloved by some and hated by others – strove to unite a fractured nation, our 16th president's campaign and election history provide the makings for a program that's equal parts educational, entertaining, and inspirational.

Among the many fascinating factoids revealed in the latest Community Connections presentation: that Lincoln once faced an opponent who slandered him as an infidel; that Lincoln only lost once in nine direct elections by the American people; that in his famous Senatorial defeat to Stephen Douglas, he actually won the popular vote; that in a previous Senatorial attempt, he sacrificed his own chance at victory for the sake of principle; that at the 1860 Republican convention in Chicago, his supporters employed trickery to improve his chances at the nomination; and that in the 1860 general election, he received less than 40 percent of the popular vote. Viewers of The Political Lincoln will learn about all of this and much more as “Honest Abe” dishes on campaigns and elections, and shares some of the lessons he learned along the way.

Kevin Wood is a professional Abraham Lincoln presenter who not only bears a remarkable resemblance to “the Great Emancipator,” but who is extremely knowledgeable about the president's life and times. Wood has been portraying Lincoln since the year 2000, during which time he has made over 1,100 appearances in 23 states plus Washington D.C. and countries abroad. As Wood states at his Web site MrLincoln.com: “As a young man, my height reached six feet three includes, and I also grew a beard. It was then that my resemblance to President Lincoln first began to come out. Still, it didn't occur to me until some years later to combine my love for history, my interest in Lincoln, my experience in public speaking, and my natural resemblance to 'Honest Abe.' Today, I get great enjoyment out of bringing one of our nation's most cherished historical characters to life.”

A pre-recorded video that will be available for viewing only from October 19 to 25, The Political Lincoln: Honest Abe on Campaigns & Elections can be found through the library's social-media accounts, the video is free to view, and no registration is required. For more information, call (563)344-3175 or visit BettendorfLibrary.org.