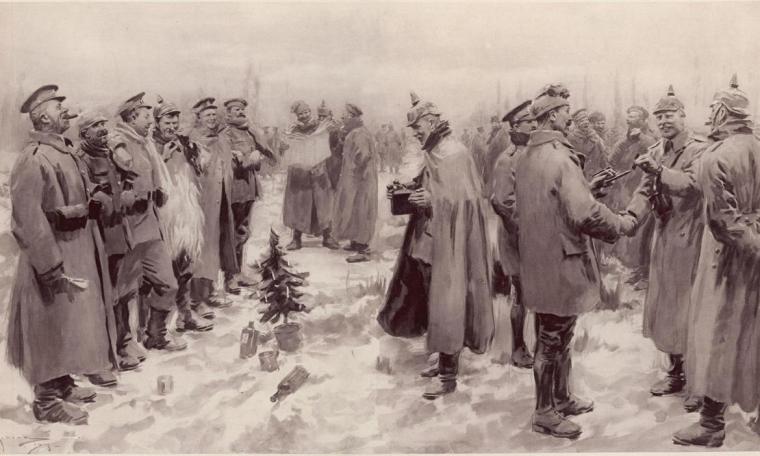 Presented by the Davenport and Rock Island Public Libraries

A special, holiday-themed presentation in the Davenport and Rock Island Public Libraries' World War I lecture series, the virtual program The Christmas Truce of 1914 will, on December 16, invite viewers to learn more about the inspiring event that found roughly 100,000 British and German troops involved in informal cease-fires along the Western Front.

The truce occurred only five months into the war. Hostilities had lulled as leadership on both sides reconsidered their strategies following the stalemate of the Race to the Sea and the indecisive result of the First Battle of Ypres. In the week leading up to December 25, French, German, and British soldiers crossed trenches to exchange seasonal greetings and talk. In some areas, men from both sides ventured into no man's land on Christmas Eve and Christmas Day to mingle and exchange food and souvenirs. There were joint burial ceremonies and prisoner swaps, while several meetings ended in carol-singing. Men played games of football with one another, creating one of the most memorable images of the truce. Hostilities continued in some sectors, while in others the sides settled on little more than arrangements to recover bodies.

With an estimated 100,000 troops taking part in the cease-fires overall, the Germans placed candles on their trenches and on Christmas trees, then continued the celebration by singing Christmas Carols. The British responded by singing carols of their own. The two sides continued by shouting Christmas greetings to each other. Soon thereafter, there were excursions across No Man's Land, where small gifts were exchanged, such as food, tobacco, alcohol and souvenirs, such as buttons and hats. The artillery in the region fell silent. The truce also allowed a breathing spell where recently killed soldiers could be brought back behind their lines by burial parties. Joint services were held. In many sectors, the truce lasted through Christmas night, continuing until New Year's Day in others. On Christmas Day, Brigadier-General Walter Congreve, commander of the 18th Infantry Brigade stationed near Neuve Chapelle, wrote a letter recalling how the Germans declared a truce for the day. One of his men bravely lifted his head above the parapet and others from both sides walked onto no man's land. He described how officers and men shook hands and exchanged cigarettes and cigars, and how one of his captains an 18-year-old who was considered “the best shot in the German army.”

The Christmas Truce of 1914 will be presented by Kevin Braafladt, the Army Sustainment Command Historian at the Rock Island Arsenal, and the virtual program starts at 6 p.m. on December 16. Participation is free, and more information is available by visiting DavenportLibrary.com and RockIslandLibrary.org.