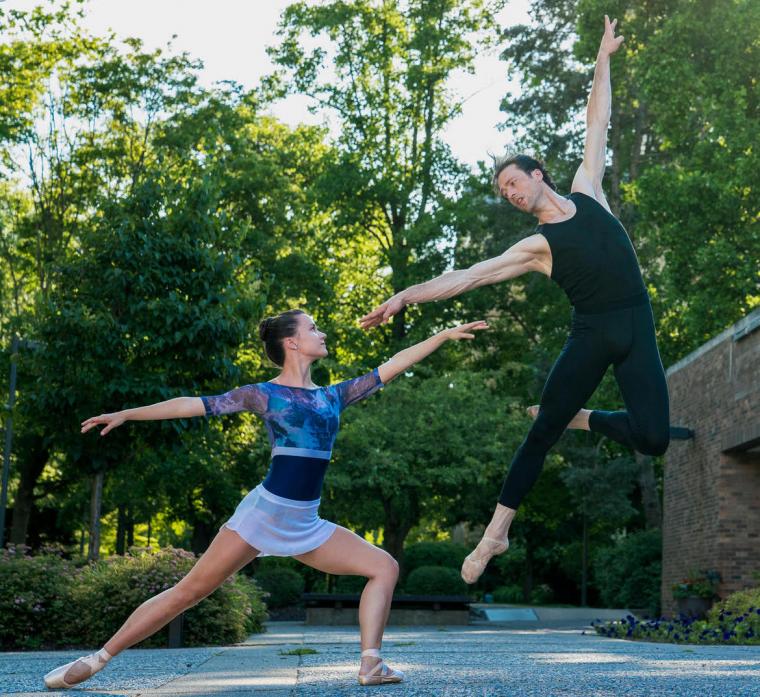 Ballet Quad Cities' 2019-20 season will open with three performances of the debuting presentation MusicMoves, a joyous collection of dance vignettes being staged September 13 through 15. But the start of a new season isn't the only thing new about the professional dance company's latest production, which will also boast all-new choreography, a new venue (Augustana College's Brunner Theatre Center), and, in the piece “Shake the Muse,” even a new approach to creating a dance.

Courtney Lyon, Ballet Quad Cities' artistic director, says the overarching theme for MusicMoves came from composer Igor Stravinski's “Dumbarton Oaks,” a concerto that Lyon set to choreography and her dancers performed in Iowa City and Cedar Rapids with Orchestra Iowa this past spring. “It's a really beautiful piece,” says Lyon. “It was commissioned by this couple for their 30th wedding anniversay – they just asked their friend Stravinsky to write a piece of music for them – and then they invited Stravinsky to play his new composition in their living room for a few of their friends.

“I knew I wanted to bring 'Dumbarton Oaks' to our audience in the Quad Cities because it's really fabulous. But because it's a 1939 score by Stravinsky, it also got me leaning toward the idea of a ballet that was entirely 20th Century music, which is a little bit different from what people sometimes associate with ballet.”

Although “Dumbarton Oaks” and a few of the other MusicMoves pieces will feature recorded music, Lyon says that about half of the program will be performed live, courtesy of flute player Jeiran Hasan and clarinet player Rob Miller, both of whom participated in Ballet Quad Cities' presentation of Paris en Pointe last September. “We had a really good working experience with both musicians,” says Lyon, “and they were both eager to do another collaboration with the dancers.”

And Lyon adds that everyone is eager to perform for the first time on Augustana's Brunner Theatre stage – a three-quarter-thrust playing area far different from the proscenium-stage arrangements at such venues as Davenport's Adler Theatre and Moline's Spotlight Theatre.

“People will have the experience of being around the dancers on three sides,” says Lyon, “and with that in mind, we picked pieces of music that could be a little more intimate, because the experience will be so much more intimate than it would be for people used to seeing us at the Adler. In some pieces, the audience will be mere feet from the dancers. And while the dancers are still projecting to reach every person in the theatre, they don't have to overdo it. They can be more subtle in some of their interpetations, and in a way, that means the whole performance can become more honest and immediate.” 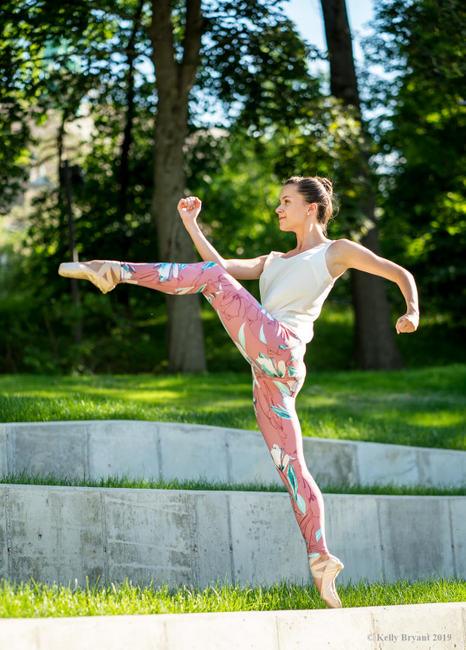 Among the additional vignettes on the MusicMoves program are an opener choregraphed by returning dancer Meghan Phillips (Lyon calls it “a really fun, joyful, playful piece that'll put the audience in the mood right away”), a sonata for solo clarinet played by Miller and choreographed by Emily Kate Long (“that one is really rhythmic and bright and cheerful”), and Long's dance piece Murali, a showcase for musician Hasan that tells the tale of the harvest moon and the flute belonging top the god Krishna.

But for sheer novelty, nothing might top Ballet Quad Cities' vignette titled “Shake the Muse,” which is being based on, of all things, a phone app.

Designed by Chuck Morris, the artist husband of fellow artist Rose Frantzen, the app, says Lyon, “was created for visual artists to help them and challenge them to make something new. You literally shake your phone, and there are over 20 billion possibilities of combinations of art elements that this app will give you, and you have to somehow put those elements together and make a new piece of art. So I met Chuck this summer and said, 'I love this idea – can I use it to make a dance piece?' He said, 'Well, I don't know. Do the elements of creating art translate to dance?' And I said, 'Absolutely.'

As the “Shake the Muse” app features such prompts as “surrealism,” “realism,” “expressive action,” and dozens of others, says Lyon, “We're still working out the bugs of how to do it. But the idea is to give the dancers some simple choreography, and an audience member will shake the phone and come up with the elements, and the dancers will have a few seconds to match their moves to the artistic elements they're given.

“I think it'll be this great opportunity to break down the mystery surrounding ballet. You know, sometimes you see things so polished and perfect on stage, and it's sometimes hard to appreciate if you don't understand all the elements that went into it. So this is a way to help give our audience insight into how the pieces get put together, and the different things we have to think about, and how things are not always perfect at the start of the creative process.

“Did you ever see Whose Line Is It Anyway?” asks Lyon with a laugh. “It'll hopefully be like that. And I told the dancers, 'I'm not going to let you hear the music 'til opening night.' I was kidding, but they were like, “No-o-o-o-o...!'”

Ballet Quad Cities' MusicMoves will be performed at Augustana's Brunner Theatre Center September 13 through 15, with performances at 7:30 p.m. on Friday and Saturday and 2:30 p.m. on Sunday. Admission is $15-25, and more information an tickets are available by calling (309)786-3779 or visiting BalletQuadCities.com.