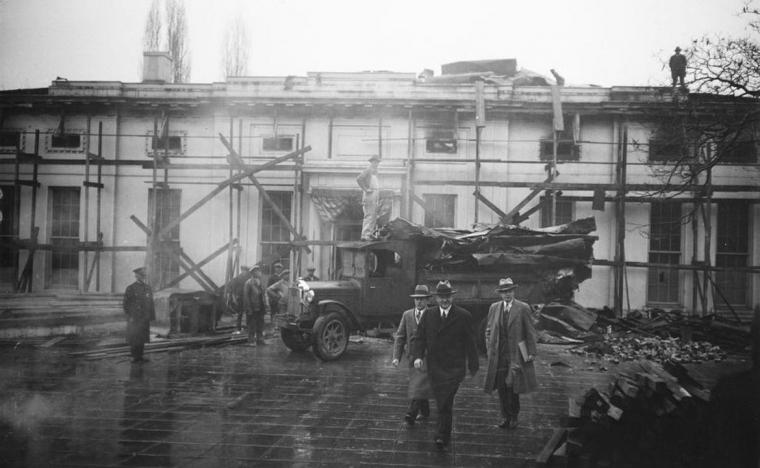 Presented by the Davenport Public Library

Delivered as part of the Davenport Public Library's virtual 3rd Thursday at Hoover's Presidential Library & Museum programming, the museum's archivist Craig Wright will present the December 17 Zoom webinar The 1929 Christmas Eve White House Fire, telling of the four-alarm emergency that led to dozens of engines and ladder companies working to extinguish the inferno.

As explained in a Herbert Hoover-themed blog at the National Archives, “The source of the fire initially was reported as an overheated chimney flue but later was determined likely to have originated from defective wiring in the attic. Smoke was noticed by a White House telephone operator who sounded the alarm. The fire was thought to be contained when the first engines arrived. But flames suddenly appeared in areas outside of the fire zone. In the end, it became a four alarm fire with dozens of engines and ladder companies working to extinguish the inferno.

“Although most of President Hoover’s important papers were saved, the Executive offices were destroyed. A number of miscellaneous documents littered the White House lawn in the aftermath. Hoover’s friend and Secretary of InteriorRay Lyman Wilbur, picked up some of the letters from the lawn as souvenirs. [And] despite the commotion, Mrs. Hoover continued a party for the children of their good friends in the main portion of the White House which was unaffected by the fire.”

The 1929 Christmas Eve White House Fire will be delivered via Zoom webinar at 6 p.m. on December 17, the event is free to the public, and registration is available through the Davenport Public Library Web site. For more information on Craig Wright's presentation and the monthly 3rd Thursday at Hoover's series, call (563)326-7832 or visit DavenportLibrary.com.