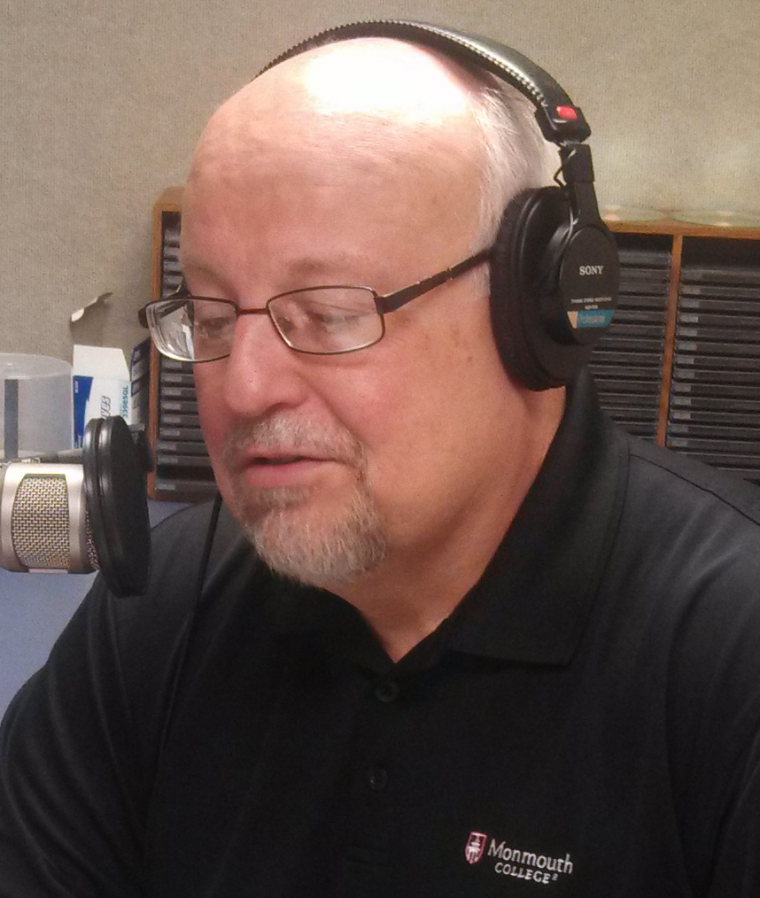 MONMOUTH, ILLINOIS (November 4, 2020) — Monmouth College faculty member Robin Johnson typically has the inside scoop on what is happening in the world of politics, but as Election Day rolled into the morning of November 4, he was like everyone else — uncertain of what the result of the presidential election would be and drinking large cups of coffee to counteract a long night in front of the TV.

"I was up late," said Johnson. "It was just fascinating to watch."

And still too close to call.

"It's hard to give a lot of analysis this morning, because there's just so much we don't know at this point," said Johnson at a time when CNN was showing a 224-213 electoral vote lead for former Vice President Joe Biden over President Donald Trump.

That left nine states without a projected winner, including three states — Michigan, Nevada, and Wisconsin — where the margin between Biden and Trump was less than 1%, with Biden leading in all three.

"If he holds onto those margins in those states, he wins," said Johnson. "I have no idea how soon we'll know the outcome. There are different deadlines for counting the vote in different states. For example, Pennsylvania couldn't even start counting the mail-in votes until Election Day. Hopefully by the end of the week, they'll know something."

In 2016, Trump won three key states by less than 1% — Michigan, Pennsylvania and Wisconsin — en route to his stunning upset of Hillary Clinton.

Biden is hoping to flip at least two of those states — with Michigan and Wisconsin being the most likely — and he also made a small but perhaps fairly-significant flip in Nebraska, winning one electoral vote from a congressional district, including Omaha.

"In most states, including Illinois, if you win the state, you win all the electoral votes," said Johnson. "Nebraska and Maine are the only two states that apportion electoral-college votes by congressional district rather than statewide. Trump will win the other electoral votes in Nebraska, but Biden gets the one vote. That single vote is going to be critical. It could wind up preventing a 269-269 tie."

Johnson knew the COVID-19 pandemic would provide additional drama this election cycle, but he's surprised by some of the other problems securing timely results.

"We've certainly seen inefficiencies in our election system," said Johnson. "You'd hope those would've been addressed after 2000 (when George W Bush won a disputed presidential election over Al Gore), but here we are 20 years later, and we're still seeing some of the same problems."

The same problems, along with some new ones.

"A national election in the middle of a pandemic has upset the normal course of voting," said Johnson. "It's going like a lot of people thought it would with the results not being available yet."

What Johnson can say with a high degree of uncertainty is that determining the outcome of the election will only be a first step in a long process for the nation.

"Our country is so divided right now between urban and rural and between people of color and whites," said Johnson, who hosts the political talk show Heartland Politics on WVIK-FM in the Quad Cities and joined the faculty at his college alma mater in 2000. "No matter who ultimately wins the election, we've got a lot of work to do as a country to listen to and understand each other better. Thank god we have small liberal-arts colleges like Monmouth that bring vastly-different people together to meet and get to know each other better."

That urban-rural divide is sometimes behind what Johnson referenced as "the red mirage," when it appears that Trump and the Republican Party have emerged victorious in certain states. But then early votes and absentee are counted later — sometimes from large, urban districts, where Biden and his Democratic Party perform well — which can swing a state to blue. Johnson said it could still happen in Georgia, where many votes from Atlanta have not yet been counted, and in Pennsylvania.

"It's doable for Biden in Pennsylvania, but he might not even need it if he hangs on in the other states where he's leading," said Johnson.