“We have to balance fighting the COVID-19 pandemic with a targeted approach that protects lives while also keeping our economy open and our kids safely in the classroom,” said Governor Kim Reynolds. “This good economic news is a reflection of Iowans’ resiliency, our ability to innovate, and work together to protect each other.”

“The drop in the unemployment rate in October is a ray of sunshine and demonstrates that Iowa continues to recover economically from the effects of the pandemic,” said Director Beth Townsend, Iowa Workforce Development. “As we enter the traditional time of higher unemployment due to seasonal layoffs, it's important to note that employers are still looking for employees and there are over 72,000 openings posted on iowaworks.gov.” 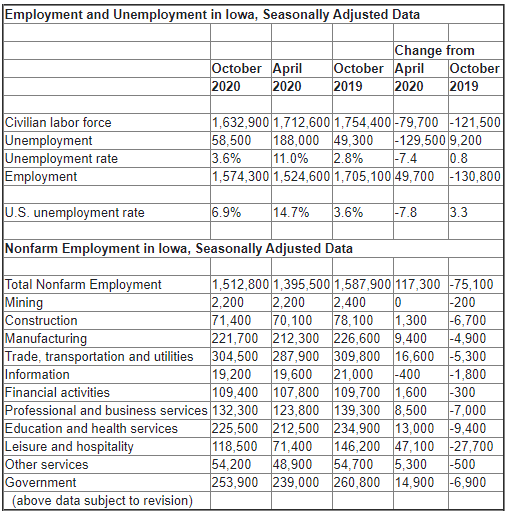 In October, Iowa total non-farm employment grew by 10,600 jobs. This month’s increase was nearly identical to the large gain last month, although growth in October was heavily fueled by growth in the goods-producing sector. Monthly job gains have averaged 8,400 over the last three months and 19,600 since the April low. Private firms in total gained 11,800 jobs in October while government shed 1,200 jobs.

Construction added the most jobs in October (+4,700). This increase was unexpected and the first gain since May. Retail trade rose by 1,600, with much of the hiring stemming from general merchandise stores. Transportation, warehousing, and utilities also added jobs in October (+900), allowing the trade and transportation super-sector to add 3,000 jobs versus September. Administrative-support and waste-management posted a large gain versus last month (+2,400) and has averaged monthly gains of 1,200 jobs since April. Non-durable goods-manufacturing rose in October (+1,600), with strong hiring in food manufacturing. This sector has grown every month since April. Private-sector job-losses were sparse and included accommodations and food services (-1,300). This is the first monthly job-loss for this sector in the last six months. Durable-goods factories pared 800 jobs in the wake of a September increase of 1,200 jobs.

Since April, Iowa firms have added 117,300 jobs back to payrolls. While leisure and hospitality did not make up ground this month, this sector is up 47,100 jobs during that span, with gains being largest in accommodations and food services (+38,500). Trade and transportation have been bolstered by unexpected hiring in the retail sector and has gained 16,600 jobs. Education and health-care have made up ground in both sectors, with 13,000 jobs added back. Manufacturing has benefitted from a surging non-durable goods sector and is up 9,400 jobs over the last seven months.

The total number of initial claims trended down in October by 3,254 (-14.2 percent) versus September and have now fallen 137,688 (-87.5 percent) versus the peak of 157,324 five months ago. For continued claims, most statistics have been reduced to approximately 77 percent of the April levels. The number of claimants dropped by 37.2 percent from last month and are down 137,001 over the prior five months. The weeks paid dropped to 142,549 in October, less than half of the 652,623 paid in April, while the total amount paid to claimants fell to $48 million, less than half of the $213.5 million paid five months ago.