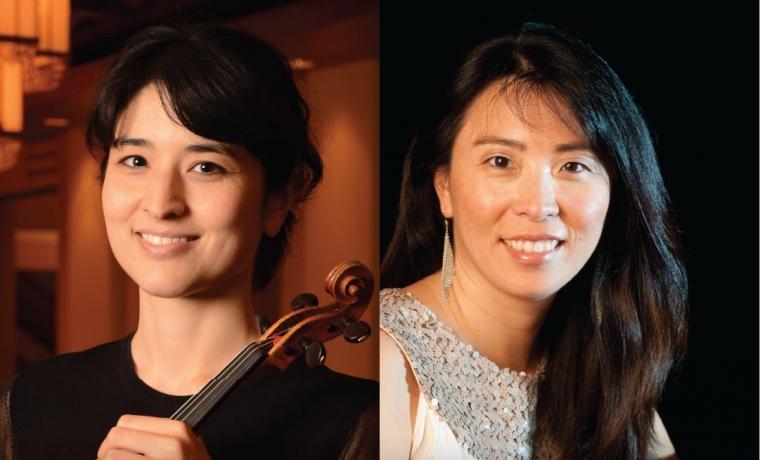 Appearing in a special Signature Series program courtesy of WVIK Public Radio and the Quad City Symphony Orchestra, concertmaster Naha Greenholtz and pianist Marian Lee will join musical forces for the August 7 concert event Fantasie, a repertoire of four classical compositions that will be performed live in St. Ambrose University's Galvin Fine Arts Center and also, through multiple high-definition camera setups, simulcast via Livestream for those wanting to enjoy the music from home.

Canadian violinist Greenholtz was born in Kyoto, Japan, where she began her musical studies at age three. Since her solo debut at 14, concerto appearances include engagements with the Vancouver, Madison, Quad City, Burnaby, Kelowna, and National Repertory Orchestras in works ranging from Bach to Stravinsky. She has also has participated in prominent music festivals throughout the U.S. and Europe, including at Maine's Kneisel Hall, New Mexico's Taos, Italy's Spoleto, Switzerland's Lucerne, and the New York String Orchestra Seminar at Carnegie Hall. Greenholtz has also had an active career as an orchestra musician. In addition to her duties as Concertmaster of both the QCSO and the Madison Symphony Orchestra, her performance highlights include guest concertmaster appearances with the Oregon Symphony, Calgary Philharmonic, National Ballet of Canada, Omaha Symphony, and Memphis Symphony, among many others.

An Assistant Professor of Piano at St. Ambrose University who received her Doctor of Musical Arts at Baltimore's Peabody Conservatory of the Johns Hopkins University, Lee made her New York debut at Carnegie Hall's Weill Recital Hall as the 1995 winner of the Artist International Award. She went on to serve as a soloist and chamber performer in Italy, France, Austria, Belgium, Brazil, Poland, Russia, Thailand, and Hong Kong, as well as in major cities throughout the United States. Lee has made numerous appearances at the Kennedy Center in Washington D.C. and performed an exclusive recital in the Hermitage Theater at the Winter Palace in St. Petersburg, Russia, and also played piano in a nationally televised broadcast from Tchaikovsky Hall in Moscow. Additionally, Lee helped develop Moscow Nights, a first-time collaboration between the music and Russian-language departments at the University of Delaware, and served as president of the Delaware Music Teachers Association.

Greenholtz and Lee will perform four pieces in the Signature Series' intermission-less Fantasie presentation: Georg Philipp Telemann's “Fantasie for Solo Violin,” Florence Price's “Fantasy in G Minor,” Fritz Kreisler's Viennese Rhapsodic Fantasietta, and César Franck's “Sonata in A Major for Violin and Piano.” In-person attendance at Galvin's Allaert Auditorium will be limited to 50 patrons with safety and social-distancing measures in place, and those who purchase Livestream tickets for home-viewing will receive a link to view the performance 24 hours before the concert.

Tickets are $25 for both the live concert and the Livestream Access (with households only required to purchase one at-tome ticket), and more information on the WVIK/QCSO Signature Series' Fantasie is available by visiting QCSO.org.