“We Just Can't Stop Evolving”: The Live Adventures of Giallows, 2019 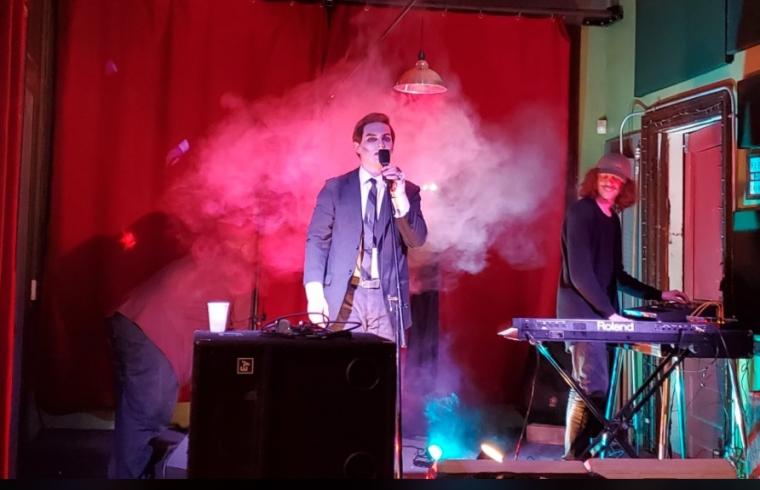 COVID-19 concerns, venue closings, and a near-total wipeout of legitimate live music has forced most bands to adjust their plans and change their approach in 2020. But even before the music world was thrown into disarray, Davenport's Giallows were already changing, arranging, and adjusting, seemingly at random but ultimately by design.

Rather than chain themselves to a single lineup and genre, the group sought from its inception to take on as many configurations as necessary in order to play as many live shows as possible. Their existing releases and live clips cover styles from heavy, goth-tinged riff-rock, bleak industrial/electronica, dark synth-pop and psych-informed improvisation.

The multi-faceted nature of Giallows is best represented on their newest release, the second of two live sets put up on Bandcamp last week. Almost Alive from Factory of Fear is an album-length distillation of a marathon two-day live session at Moline's haunted attraction in June of 2019. They served as the demented house band for "INFECTED," an annual event in which the sights and sounds of live bands are added to the shrieks, screams, and racket of performers and victims. It's a fitting venue for a band that bases its aesthetic on lurid, low-budget, Italian slasher films.

Adam Wesconsin (guitar and vocals), Devin Alexander (bass and vocals), Andrew Cline (keyboards, also of aqualife), and Justin Kelley (drums, also of Dead Ginger and Rezinator) alternated between a set of originals and a set of improvisation, done twice over and repeated on the second night. That's no mean feat for any band, especially one not known for venturing into the risky world of improvised music. They doubled down by streaming the entire ordeal live on YouTube, a document still available for viewing by the truly obsessive. The best takes from each of the four sets of originals are presented here.

"In This Chest" kicks things off with no warning, throwing the listener headfirst into its lurching death march. Strangulated power chords and Fripp guitar couple with spook-parlor organ to set the horror-film atmosphere, while Alexander warbles and croons his disturbing invocations: "In the ways you ring and rosie / pockets full of poison poses / ashes in your teeth and gown … . As the sun sets can you guess / what becomes of hesitation/this is why I don't come round … ." With those strange vibes, you wouldn't come round either. 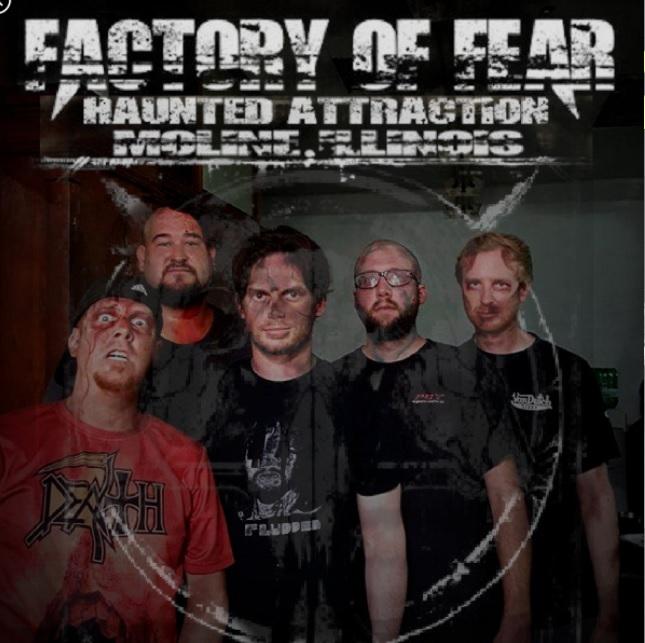 "The Year of If Only" is a deceptively upbeat rocker, with more inscrutable lyrics: "Open up and scream your time has come / even in your dreams you suck your thumb." It progresses (degenerates?) from there. Meanwhile Wesconsin' chugga-chugga guitar and Cline's squeaky synths seem unaware of what kind of madness they're fueling, or perhaps look back on the song with their own mocking detachment.

Wesconsin's "Brainbow"is normal by comparison, a psych-rock micro-epic that stands with the best music ever to come out of the Quad Cities. "Fly, My Heron" settles into a slinky disco groove coupled with more laid-back alt-rock, flowing into the slow-rising and subdued length of "Mouthful of Teeth."

The centerpiece of Almost Alive is "Star Missing." It could function as soundtrack for a high-school dance on another planet, a twisted piece of love's obsession buoyed by formidable over-driven bass and haunted by ghostly cocktail organ. Wesconsin's heavily effected Fender Jazzmaster cuts across like a burning satellite or a slow comet, torched and falling across the sky for the viewing pleasure of the dancers beneath the planetary dome.

"Doom" is a minute-and-a-half of foreboding organ, leading into the heavy rock of "Leather, Baby," a garage-rocker tainted by spy-film organ, unexpectedly dirty riffage and Alexander's sinister croon. The song, and the self-titled EP from which it springs, are essential listening not only for those interested in current local music, but also those who thirst for the best in modern heavy rock. It is delivered with proper gusto on Factory, and provides an abrupt yet fitting closer for the album.

Bandcamp's Friday drop of the Factory of Fear set was teased the night before by another release- an audio capture of a show at Rock Island's Rozz-Tox on October 11th of last year. While the Factory of Fear shows saw an expanded Giallows demonstrating what they could do with keys and a light show, the later set featured a duo pared down to the extreme. All instruments were played by Andrew Cline: a '60s trash-score organ, a synth, and a programmed drum machine. Without a massive bass tone to lean on, Devin Alexander was free to emphasize the creeping dread of his lyrics and act as a demonic master of ceremonies for the short but compelling show. While all songs can be found on the Factory recording, the Rozz-Tox recording is far from redundant, as the two-piece deconstructs the full-band material with sinister and fascinating results. 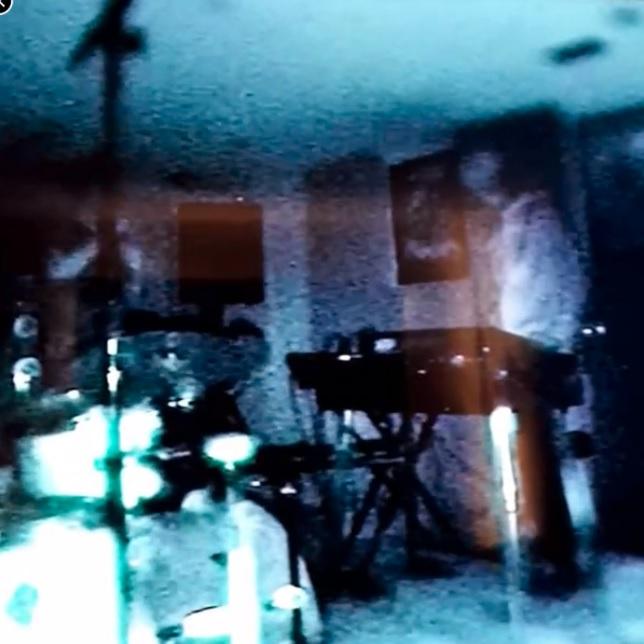 While only fanatics need dig deep into YouTube for the raw material of Almost Alive, the video documentation of Halloween Duo @ Rozz-Tox is essential viewing. Raw, grainy footage from a hand-held camcorder follows the exploits of a suit-clad Alexander, done up like a vampiric Gary Numan, holding the small audience rapt with a stock-still delivery and a thousand-yard stare. Some aspects are lost on the audio version (such as the extended vamp on "Star Missing" where he walks through the length of the Rozz-Tox crowd grunting and squealing to the tranced-out beat) but it is still a fitting document of a brief and glorious moment in the continuing saga of Giallows. Presented as an unbroken 27-minute track, it is worth dropping a lowly dollar to download the set to the device of your choice.

At the time of their most recent release (Placer, back in May), Giallows mainly functioned as a power trio, staging regular improvised live sets from their practice space throughout the springtime, and drawing on those jams for new recorded material. It would seem that incarnation has run its course ... for now. As Alexander states, "We're entering a period of writing, so we won't be doing anymore jam-streaming. We've sort of grown tired of that, but if a show is a streaming show such as The Festival, we'd entertain the idea, for sure! Lots of great places to stream from around here."

Alexander is referring to a series of paid streaming events staged by QC impresario Royce Barnett, recorded or streamed live from Davenport's Renwick Mansion. The Festival brings together musicians of various genres in an attempt to present a micro-"festival" that can be enjoyed safely by music fans while still benefiting the musicians. The next event, featuring K1ng Supr3m3, Baruch, Poor Bill and Murnau, is set for October 17 from 7 to 10 p.m. The cost to view is $5 in advance and $10 the day of the show; tickets are available on Eventbrite.

What's next for Giallows? Alexander had this to say: "Our future plans are an entirely fresh crop of songs, with no acoustic drums for the foreseeable future … we'll be using more electronic elements to change it up, as is our path over the last few years. We'll be gently returning to [the goth synth-pop sound] when CM [Alexander] becomes our full-time new 'drummer' … . We just can't stop evolving! I hope our instincts as we move forward continue to produce stuff you dig, too!"